Manish Sisodia: Congress is tired, no one trusts it. Its thinking, like Sheila Dikshit on Nirbhaya, made Delhi turn away

Delhi’s deputy chief minister Manish Sisodia went on a padh yatra in Khichripur. Supporters say his roadshows are fun because he actually bothers to interact with people on the route.

Two AAP supporters were putting up posters where the padh yatra of Manish Sisodia was about to start at Khichripur in East Delhi. At 7:30 AM, a dozen supporters gathered with dhols and speaker-songs like ‘Abki baar, purna raj’ (This time, full statehood) were being played.

Unlike politicians who are never on time at their rallies, Manish Sisodia had come punctually, with a few supporters and zero security, to start his padh yatra.

As he began his campaign, greeting elders and putting garlands around them, it seemed he was in no rush. AAP’s mandate could be clearly seen as people threw rose petals on Manish Sisodia and shouted, ‘Is baar, 2015 se bhi zaida’ (This time, more votes than 2015 even).

As I walked along, I asked, AAP and Congress tried intensely to get into an alliance — until talks failed between the two. But why did AAP need Congress in the first place? “See, AAP had never been desperate to get into an alliance with the Congress. Our main aim is to overthrow Narendra Modi because of the way he is destroying institutions and the social fabric of the country. AAP is desperate to remove Modi and that’s why we thought of alliances in all the states where we have some presence, Maharashtra, Goa, Punjab, Haryana and Delhi. Congress didn’t agree — they are ready to defeat themselves and let Modi get another chance. The alliance broke off as Congress wanted an alliance only in Delhi and not in other states,” said Sisodia. 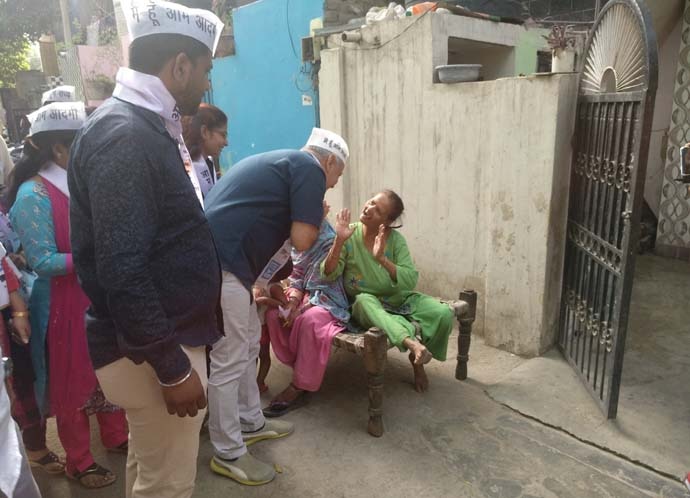 AAP supporters say unlike other road shows, Manish Sisodia actually gets off his vehicle and meets people on the ground. (Photo: Author)

He went on from one lane to the other. He didn’t give any speeches but only greeted people while AAP supporters shouted to press ‘jhadoo ka button’.

As Sisodia was campaigning for Atishi, she was out on another campaign trail in another part of East Delhi.

“The difference between AAP and other parties is that they come and do road shows, visit people’s houses while others like to wave hands from swanky cars,” said Alka Singh, a resident of the colony.

While Sisodia was walking, a few AAP workers had formed a chain around him and were ensuring that no one who wasn't a familiar face comes near him.

“Last week, Arvind Kejriwal was attacked; the man was not part of AAP. Our worker can never do what was done that day. He was clearly a BJP worker and this has come out too. You won’t see Modi as PM after May 23,” Sisodiya calmly smiled.

As Delhi’s deputy CM went on his padh yatra, actor Prakash Raj joined him. People thronged Raj, seen in big hits like Dabangg-2, to get selfies. Even AAP workers asked the versatile actor to stop and take photographs with them. He obliged all. “The response has been immense for AAP wherever we have gone,” said Raj.

Unlike civic issues which are the highlight during elections, the Balakot air-strikes have reached debates in drawing rooms and impacted the Delhi campaign now too. “What is this, why is Modi taking the credit for a strike which was done by the Indian Air Force? It’s highly disgusting that he is asking for votes in the name of a feat which has been achieved by our armed forces. Let me tell you that the army has been carrying out such attacks earlier too. Congress should know about the surgical strikes they are taking about. These issues should not be politicised,” said Sisodia, suddenly serious. 'Even more than 2015', repeat the supporters as Manish Sisodia and actor Prakash Raj walk through Khichripur. (Photo: Author)

Last year Sheila Dikshit, three time-Delhi CM, had written in her autobiography Citizen Delhi: My Times, My Life that ‘the Congress did not take Arvind Kejriwal’s foray into politics seriously enough and his ability to tap into the sentiments of the voters.’

But isn't the old party repeating the same mistake itself now? In this election, Dikshit, speaking in an interview, reportedly said: “Nirbhaya gangrape case was "blown out of proportion by the media.”

Manish Sisodia smirks and says, “Her thinking hasn’t changed — it’s because of such thoughts that Delhi’s people had turned their face from her. Everyone should know that this cannot be a one-off case. For the girl’s family, imagine what they have gone through. They lost their girl," he added, poignant until a group of supporters greeted him.

The battle in East Delhi seems a three-way fight, with Atishi contesting on AAP’s ticket, Arvinder Singh Lovely on Congress and Gautam Gambhir from BJP. One can see posters of BJP and Congress at a few houses as the padh yatra goes on. “Congress has become tired. No one trusts this party anymore,” remarked Sisodia.

During his padh yatra, Sisodia could been seen hugging Muslim voters, speaking with them patiently. Is the party also playing vote bank politics?

“Every Indian is our vote bank, the person who is sending his kid to school, the person who is thinking about their kid’s career, we provide education to all sections of society, not one in particular. We are telling the voters that now votes will not be cast on jumlas (empty promise) but on the work which has been done. Modi is asking for votes on jumlas — we are asking for votes on our work,” he added. 'AAP provides education to all, not just one section of society,' says Manish Sisodia on charges of vote bank politics. (Photo: Author)

During election time, many politicians change their loyalties. Devinder Singh Sehrawat and Anil Bajpai have left the party and joined BJP.

“This is the sad part," he says, both smiling at friendly faces, while giving me a serious look. "I think BJP is buying MLAs and giving them Rs 10 crores,” claims Sisodia. But he also now relaxes after his political walk — and has a dhokla.