Masood Azhar Designated Global Terrorist: Why this is better than sanctions against Hafiz Saeed

The man who masterminded the deadly attack on 40 Central Reserve Police Force (CRPF) in Pulwama on February 14 is an international terrorist — China has finally lifted the technical hold it had put on designating Jaish-e-Mohammed (JeM) chief Masood Azhar as an international extremist.

The move is a massive diplomatic win for India — given that China is considered an all-weather ally of Pakistan. This is also the first time a terrorist has been slapped with international sanctions for an attack that happened in Jammu and Kashmir. When the UN banned Lashkar-e-Taiba (LeT) chief Hafiz Saeed, it was the Mumbai terror attacks of 2008 that had galvanised the international community. Many foreign nationals had died in the attack.

But the attack in Pulwama was targeted against India security forces.

On April 30, China said that “positive progress” had been made over designating Jaish chief Masood Azhar as a global terrorist by the United Nations, indicating that listing him under United Nations Security Council resolution 1267 will happen soon.

India had been pushing for the move for years given that Indian intelligence agencies had succeeded in finding direct links between Masood Azhar-headed Jaish and a series of attacks in India.

China put a technical hold in March on a fresh proposal to ban Masood Azhar, despite Jaish claiming responsibility for the Pulwama terror attack. It was the fourth time that China had blocked Masood Azhar's listing as a global terrorist by the UN.

It reportedly took France, the UK and the US to mount pressure on China to ban Masood Azhar — a fresh proposal was moved by the three countries, which led to China finally removing its roadblock.

Sources said the US, UK and France had been working hard to step up pressure on Beijing by taking the issue directly to the powerful UN Security Council. China insisted that the matter should be resolved at the 1267 Committee, whose proceedings are not publicised. 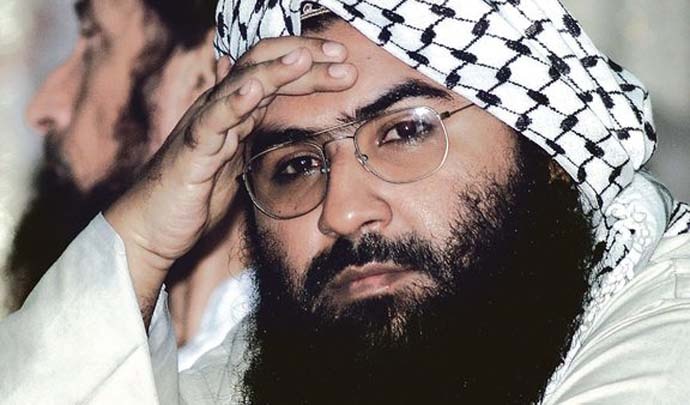 Masood Azhar has blood on his hands. And the world, including China, now knows it. (Source: Reuters)

Though China can exercise its veto as a permanent member of the UNSC, Beijing has staunchly opposed taking the issue to the UN body as it has to publicly explain its stand on Masood Azhar.

Given that the sanctions against Saeed too could not deter Pakistan from letting him roam freely in the country, the ban on Azhar too is not likely to have a great impact on his terror activities. What the ban does for India is basically score a big diplomatic win which has resulted from India’s economic prowess — the country is set to take over the UK as the world’s fifth largest economy.

The sanctions coming in the middle of the election season also boost the BJP’s prospects as the government can now present this to voters as part of its muscular nationalism strategy.

After the Pulwama attack, not only did India ensure terror camps in Pakistan were targeted in surgical air-strikes, but also that the world community took cognisance of India’s concern of Pakistan-based terror organisations launching terror attacks in India.

With Pakistan Prime Minister Imran Khan having shown reluctance to accept Jaish’s role in the Pulwama attack by asking India for proof — despite the terror outfit claiming responsibility — the sanction against Masood for the same crime is a huge setback for both Khan — and those who rooted for him to get a Nobel Peace Prize for ‘diffusing’ the tensions between the two countries in the aftermath of the attack.

A UNSC tag will subject Masood Azhar to assets freeze, travel ban and an arms embargo.

An assets freeze under the Sanctions Committee requires that all states freeze without delay the funds and other financial assets or economic resources of designated individuals and entities.

India has been asking Pakistan to hand over Saeed and Azhar to try them for the terror attacks launched in the country. Pakistan is heavily dependent on the world community for its survival, having failed as a country. Increased world pressure on Islamabad could well force it to act against terrorism now.

#Terrorism, #Un sanction, #China, #Masood Azhar
The views and opinions expressed in this article are those of the authors and do not necessarily reflect the official policy or position of DailyO.in or the India Today Group. The writers are solely responsible for any claims arising out of the contents of this article.