The election pitch will reach a crescendo with BJP branding Congress as a 'terror sympathiser', one that raised questions over the IAF strikes in Balakot as well.

No one has forgotten senior Congress leader Digvijaya Singh addressing Osama bin Laden as 'Osama ji', almost sounding sympathetic towards America’s most-wanted terrorist, who led the US to launch a deadly war against terror.

Then came 'Hafiz Saeed sahab' — once again from Digvijaya Singh. And now, the Congress president Rahul Gandhi himself has addressed Masood Azhar as 'Azhar ji'.

This leaves one wondering what’s with the Congress and the culture of ‘ji’? Why such respect for the enemies of humanity? Do they actually think that showing respect to the terrorists waging terror in the name of religion will please a certain vote bank?

Is it intentional — or accidental?

In the latest incident of Rahul Gandhi referring to Masood Azhar as 'ji', was it really sarcasm, cloaked as respect, as the Congress claims it to be?

As soon as Rahul Gandhi uttered the ‘ji’ word, BJP’s top leadership, with Union Minister Smriti Irani leading the charge, attacked Gandhi for ‘loving’ the terrorists and disrespecting the PM. The hashtag #RahulLovesTerrorists started trending on Twitter in no time.

What is common between Rahul Gandhi and Pakistan? Their love for terrorists.Please note Rahul ji’s reverence for terrorist Masood Azhar - a testimony to #RahulLovesTerrorists pic.twitter.com/CyqoZ7b9CF

In his eagerness to attack the BJP over the release of Masood Azhar, following the hijack of Indian Airlines plane IC 814 in 1999, Congress president Rahul Gandhi ended up scoring a self-goal.

Forget scoring a brownie point over the muscular nationalism being flaunted by the ruling party after Balakot, Gandhi and his party now have a bit of explaining to do.

Congress spokesperson Randeep Surjewala was quick to point out the sarcasm apparently intended in Rahul Gandhi’s comment and stuck to the question of who released Masood Azhar. Masood Azhar is chief of the JeM — the Pakistan-based terror organisation which claimed the attack on the CRPF convoy at Pulwama in South Kashmir on February 14. India has since intensified its diplomatic blitzkreig to get Masood Azhar listed as a global terrorist at the United Nations Security Council (UNSC) meet. America is leading the charge — with only China being the inscrutable one.

Whether Gandhi was being sarcastic or respectful is not clear. What is, however, clear is that his political adversaries won’t let it pass. The BJP’s Twitter handle has already put out memes of the Congress president as a terror sympathiser who questions our armed forces.

The situation makes one ask where Gandhi’s communication advisers are?

As a person who has spent considerable time in politics, Rahul Gandhi should have known such subtle sarcasm doesn’t work with ordinary voters. The same applies for Digvijaya Singh too.

Post-Pulwama and Balakot, the BJP is driving the narrative of muscular nationalism and conflating the party with India. Instead of changing the narrative and taking it to real issues like joblessness, agrarian distress at al, the Congress is playing to the BJP’s script by asking for proof of the strikes and questioning the casualties in the Indian Air Force air-strikes. All that this has helped the party and its leaders achieve is to get branded as ‘anti-nationals’ in the public discourse.

Rahul Gandhi may have actually been trying to corner the Narendra Modi-led BJP regime by blaming them for Masood Azhar being a free man — but the Congress president ended up looking absolutely unprepared to take on the still-strong incumbent.

This ‘ji’ is going to haunt the Congress chief through the camapign as people do not like political leaders to use sarcasm over a serious national security issue. The BJP will for sure ensure the voters do not forget it.

In her first election speech since taking charge as Congress general secretary in Narendra Modi’s political den, Gujarat, Priyanka Gandhi tried to bring the narrative back to joblessness, agrarian distress and the crippling effects of demonetisation on the economy — but in the days to come, the BJP is sure to remind voters of Rahul Gandhi’s use of ‘ji’ for Masood Azhar, presenting it as Congress’ love for terrorists. 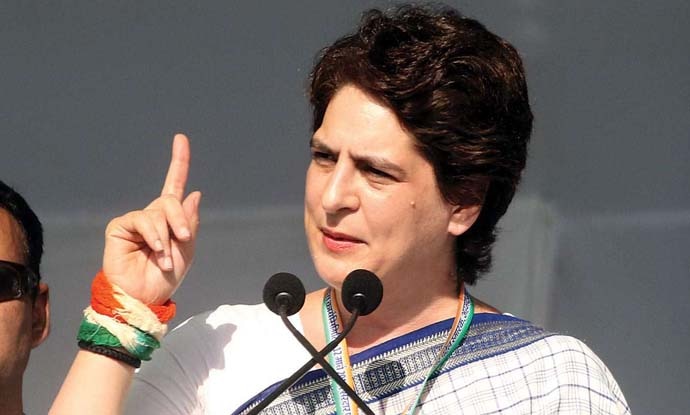 IN her first election speech, Priyanka Gandhi talked about jobs and agrarian distress. But will that change the narrative? (Source: India Today)

The election pitch will reach a crescendo with BJP branding Congress as a 'terror sympathiser', one that even raised questions over the IAF strikes in Balakot. Meanwhile, the Congress is now reminding voters that it was the party that arrested Masood Azhar, but the BJP freed him.

Even as the parties bicker, Hafiz Saeed, a designated global terrorist, is freely roaming the streets of Pakistan. India, meanwhile, is trying to get the global community to recognise Masood Azhar as a global terrorist as well.

How these issues play out during the electoral campaigns of political leaders now could actually decide who wins the 2019 General Elections.

#2019 general elections, #Rahul Gandhi, #Jaish-e-mohammed, #Masood Azhar
The views and opinions expressed in this article are those of the authors and do not necessarily reflect the official policy or position of DailyO.in or the India Today Group. The writers are solely responsible for any claims arising out of the contents of this article.