Who is this Kolkata Imam who offered money to blacken PM Modi's face?

Maulana Nurur Rahman Barkati is Mamata Banerjee's 'rakhi-brother', but if he continues like this, he may soon lose favour with the West Bengal CM.

My school was hardly 100 footsteps away from the iconic Tipu Sultan Mosque in Kolkata. Hence every Friday, we would go there to offer the afternoon congregation prayers in its patio. I had of course heard the name of Maulana Nurur Rahman Barkati, the Imam of the mosque, but had never seen him though.

My moment of truth came when I was in Class 9 and the joint NATO forces, led by the US, decided to attack Taliban in Afghanistan in the aftermath of the 9/11 attacks. A large number of people saw it as the US aggression on Afghanistan and organised protests to condemn the invasion.

On one Friday, immediately after the prayers, as it was announced earlier, most people stayed to take part in the ritual protest gathering and burning of effigy of the then US president George W Bush, right outside the historical mosque, built by one of the sons of Tipu Sultan. I don't remember the exact words, but Maulana Barkati shouted at the top of his voice to condemn US invasion and announced that if needed he too will go to do "Jihad" against the "Judeo-Christian nexus", similar to what another "Shahi" Imam form Delhi's Jama Masjid had announced.

Outside the 19th century mosque at the heart of the city, there is hardly any aura of royalty (Shahi) left, except the food stalls selling "Shahi Haleem". I am not sure if it was some marketing gimmick or black humour of someone who named the cheapest available haleem made from beef as Shahi, instead of mutton or chicken. But clearly this is also a reflection of the deep decay in the erstwhile Muslim "royalty".

The National Democratic Alliance (NDA) of Atal Bihari Vajpayee was in power in Delhi at that time and the then invincible Left government hardly paid any heed to religious leaders of his ilk. For matters like Eid prayers, more sober and gentle clerics like Imam of Na-Khuda masjid, popular as Badi Masjid in Kolkata, or Maulana Fazlur Rehman, who leads the biggest Eid congregation on Red Road, were consulted. 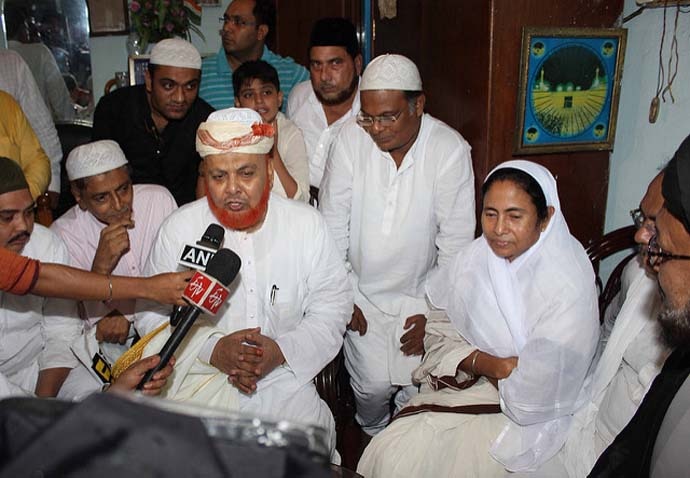 Political aspirations, as also the hope of continuing to remain relevant, made Maulana Barkati go closer to then rising star of the state, Mamata Banerjee, who had broken away from the Congress to form her own Trinamool Congress (TMC) and briefly served as railway minister in the Vajpayee cabinet. It had hence become a topic of debate and gossip around that time when Didi had tied rakhi to him on one Raksha Bandhan.

The debate was not much on rakhi of course, but the fact that he had no qualms even when TMC was aligned with the BJP.

Maulana Barkati is thus, technically, a rakhi-brother of the current chief minister of West Bengal. It is an open secret in Kolkata that his proximity has benefited him financially as well and his son got several lucrative contracts. Although Imam of a mosque, he loves the show off his power and travels in car with red beacon.

When Bengal switched from Left to TMC in 2011, Muslims too en bloc turned towards Didi, particularly after she refused to have alliance with the BJP. Of course, Maulana Barkati was not the only Muslim cleric or leader to extend support to TMC, but as Imam of a famous mosque, he enjoyed unrivalled leverage. Needless to say, Maulana Barkati's political calculations hit the nail when Didi became the CM and consequently he became the uncrowned Shahi Imam in true sense by default.

In 2010, he was drawn into a controversy allegedly for solemnising 'forbidden marriage' as he had performed nikah of a boy with a transgender; although he had clarified that he had not seen the prospective girl's face, alleging it was a conspiracy to malign him just before the Assembly elections.

In 2013, he had spearheaded a campaign demanding a ban on Bengali serials that was scripted by Bangladeshi author Taslima Nasreen. During the critical general elections in 2014, according to media reports, Banerjee did not want to take any risk and hence took his help in mobilisation of Muslim voters. He was quoted in media saying that not only Didi herself, but several other TMC leaders called to seek his help.

"I received calls from several other senior leaders of the ruling party including Mamata Banerjee, her nephew Abhishek Banerjee and her MP Sudip Bandyopadhyay late at night yesterday. They requested me to see that the minority voters should not stray from the ruling party," he had told the Indian Express then. Maulana Barkati was also nominated to lead Didi's ambition in UP for the 2014 general elections.

National media that is confined to Delhi might have suddenly had eureka moment hearing his ridiculous statement, announcing Rs 25 lakh for anyone who would shave and blacken the head and face of Prime Minster Narendra Modi, in presence of a TMC MP Idris Ali. But in Kolkata, Maulana Barkati is famous for controversies, akin to his Delhi counterpart. Many people are also critical of his Friday sermons, where he begins with religious matters but soon mutates to rabid political exploitations. If he continues like this, he may soon lose favour as TMC would find it difficult to associate with his bigoted statements for long. In fact, there are already murmurs that he feels sidelined and these are his desperate attempts to remain in news.

In the last assembly election then general secretary of the state unit of Jamiat Ulama-e-Hind, Maulana Siddiqullah Chowdhury contested from Burdwan's Mangalkot seat on TMC ticket and is now a minister in her cabinet. Chowdhury was quoted in DNA, saying, "He is immature and has said these to be in the news. The statement has been made in bad taste and he has insulted the high chair of an imam."Muslim leaders of the party and other religious leaders have been quick to disassociate from his statement although he remain defiant.

While Maulana Barkati's statement must be condemned in unequivocal terms it also brings attention to the inherent prejudices of the media. From the Indian Express to the Times of India, all used the word "fatwa" in their headlines, which implies "legal opinion" or "learned interpretation" based on Islamic teachings. Calling random statements of a cleric turned politician as "fatwa" is a poor reflection on media's bias as well.

It is also ironical that as the BJP demanded his immediate arrest, a local BJP leader Manas Sarkar declared one crore bounty on his head. Central minister Sanjeev Baliyan has defended the recent statement of Sakshi Maharaj where he blamed Muslims for producing more children, saying he did not take name of any community. BJP's Unnao MP had said, "The population rise is not because of Hindus. Population has risen due to those who support the concept of four wives and 40 children."

Meanwhile, instead of apologising for what he said, on Monday night Maulana Barkati unfurled another controversy on Zee News by threatening Tarek Fatah, Pakistan born Canadian citizen, famous for his bigoted stand against Indian Muslims - and hence promoted on all channels - to be "beheaded".

As I see the foot-in-the-mouth disease of such clerics claiming to be leaders, I am reminded of a couplet by great philosopher-poet, Allama Iqbal:

(What is a nation, or how to lead it? What clue these leaders of prayers could have of that!)

Also read: Imam Barkati, Mamata and the destruction of Bengal

#West Bengal, #Mamata Banerjee, #Narendra Modi, #Maulana Nurur Rahman Barkati
The views and opinions expressed in this article are those of the authors and do not necessarily reflect the official policy or position of DailyO.in or the India Today Group. The writers are solely responsible for any claims arising out of the contents of this article.