UP's Gathbandhan crumbles: 5 reasons why cracks have developed in the SP-BSP alliance

BSP supremo Mayawati has announced that her party will not fight the upcoming Assembly polls in UP with earlier partner SP. Here's why the once-famed gathbandhan is now looking set to collapse.

1. Not Their Master's Voice

The gathbandhan's biggest mistake was overestimating the power of its leaders on their cadres. Simply demanding that their cadres drop ancient frictions and suddenly vote across party lines was a thoroughly unrealistic expectation which both Mayawati and the Yadav family suffered from. The party workers of the SP-BSP were seen sharing the rally sites during the elections, but on ground level, they remained a fiercely divided lot.

While dangling the carrot of political success before its cadres, the gathbandhan overlooked centuries of caste clashes over land as well as rural rituals of power and humiliation that rankled deep within the Yadavs and Dalits of UP.

Clearly, one political alliance, with a shot at governmental power only for the leaders involved, was not enough to smooth over such old friction. 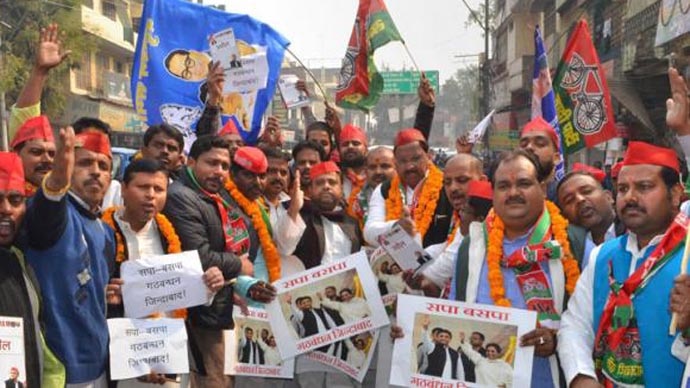 United, we fall: Party workers stood together in rallies but they were, in reality, a divided lot. (Photo: PTI)

Analysts also say the alliance was bound to fail particularly keeping in mind the caste humiliations Dalits have suffered at the hands of caste groups like Yadavs. For the Dalits, voting for an SP candidate was no easy task. Therefore, the lack of transfers of BSP votes to SP candidates in several locations, where Dalit voters in fact preferred to vote for the BJP.

The whole central concept of this alliance was that the Samajwadi Party would support the BSP in the Lok Sabha polls. This was reportedly a pact to ensure that Mayawati would get a strong hold in national politics. At the same time, the BSP would return the favour by helping the SP in the upcoming Assembly elections, so that Akhilesh Yadav could possibly become the chief minister of UP again. In this manner, the gathbandhan's central planning mapped out power equations between the two parties, but seemed to have completely overlooked ground realities, such as the success of the BJP government's development and welfare schemes that had impacted multiple rural voters, as well as the enormous pull of muscular nationalism, also deployed by the BJP.

The real and hard-hitting impact of such realities ran rings around the central planning of the gathbandhan group, which appeared more concerned about power and life after the polls than reality during the elections. They had each other's back. But did they, really? (Photo: PTI)

Another strong theory about the gathbandhan has been that the entire coalition came about with the hopes of pitching Mayawati as a Prime Ministerial candidate and the SP would back her in this move.

But both parties' hopes were dashed as Mayawati could not make her mark. It is clear both parties, despite their decades of political experience, failed to correctly estimate the huge Narendra Modi wave before whom no other PM candidate could end up holding any substantial ground.

BSP Chief Mayawati on SP-BSP coalition: It's not a permanent break. If we feel in future that SP Chief succeeds in his political work, we'll again work together. But if he doesn't succeed, it'll be good for us to work separately. So we've decided to fight the by-elections alone. pic.twitter.com/VP20N4zL4Y

Shivpal Yadav, once a loyal strongman of the SP and brother of party supremo Mulayam Singh Yadav, is also being held responsible for splitting the votes of the Yadav party. Earlier, Shivpal Yadav was blamed for creating deep animosity between father Mulayam and son Akhilesh and now, he is being blamed for alleged machinations to manipulate votes away from the SP in this crucial election. An Uncle Scorned? Shivpal Yadav has been held responsible for damaging the party. (Photo: PTI)

SP supporters claim his alleged moves eventually led to significant losses for the SP which managed to get only 5 seats, while the BSP, free of such a factor, fared better with 10 seats.

The Shivpal camp had voted for NDA candidate Ram Nath Kovind in the Presidential election in 2017 earlier. Some say that the BJP backed Shivpal against the SP now.

The bitter family feud clearly spilled over into the political battleground as well.

5. The Cons and the Cons

A crucial review meeting of why the BSP did not manage to get the required number of seats in the Lok Sabha polls was recently held at Mayawati’s residence. 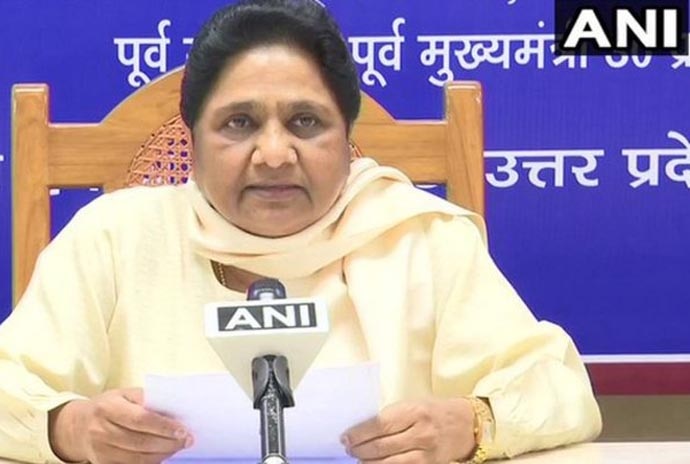 Going It Alone: The BSP has reportedly found more cons than pros in allying with the SP. (Photo: ANI)

Summing up the cons and cons, as it were, of the gathbandhan, her party workers reportedly told Mayawati that going it alone in the Assembly polls would help the BSP much more and would ensure that Mayawati has a chance at becoming UP's chief minister, not 'bhatija' Akhilesh.

This is clearly the beginning of the end for the gathbandhan.

Also read: How the BJP won UP: The BJP defeated the formidable SP-BSP caste alliance in UP. Here's how