Mayawati makes first rally appearance in 5 years, but not at a dalit rally

Bahujan Samajwadi Party supremo Mayawati made her first rally appearance in 5 years, not at a dalit rally, but at a Brahmin sammelan.

Brahmins, who have traditionally been blamed for the Brahminical varna system which in turn is blamed for the systematic persecution and exploitation of dalits for centuries, are the most-wooed caste group in Uttar Pradesh, as India's most populous state prepares for an Assembly election.

The Brahmin outreach sammelans are called Prabuddh Sammelans or intellectual meets. The caste that sits atop the varna system used to have a monopoly over knowledges and continues to dominate when it comes to education. Hence the sobriquet intellectual. 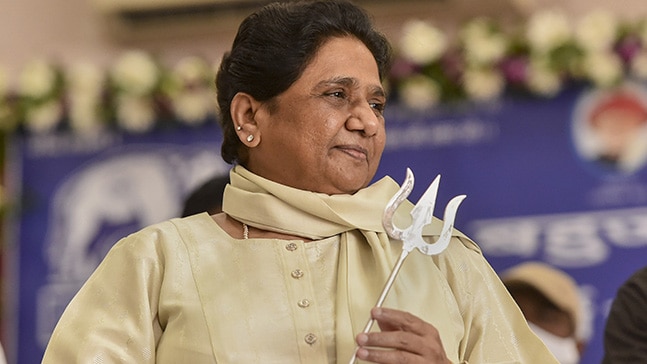 Mayawati at the Prabuddh Sammelan on September 7. Photo: PTI

BSP has tasted success with its Brahmin-Dalit coalition in 2007 when it won 206 of the 403 seats and formed government. Like the last time, BSP's tallest brahmin leader Satish Chandra Mishra is leading the drive this time too.

Samajwadi Party is organising its own prabuddh sammelans and began with Ballia in Eastern UP. Brahmin MLAs from Samajwadi Party have been asked to organise these "intellectual meetings" across the state. Samajwadi Party is organising its own prabuddh sammelans and began with Ballia in Eastern UP. Photo: PTI

In the absence of a caste census, the population share of different castes is a matter of guesstimating figures. According to most guesstimates, Brahmins are anything between 10 and 12 percent of the population while Rajputs are 7 to 8 percent.

BJP had scrapped the Parashuram Jayanti holiday. The ancient sage Parashuram is projected as a Brahmin icon. Parashuram is supposed to have eliminated all Kshatriyas (Rajputs are Kshatriyas) from the earth. Samajwadi Party has also promised to build a giant statue of Lord Parashuram.

The death of Vikas Dubey, a Brahmin gangster, in a controversial police encounter is often played up as persecution of Brahmins in the Yogi Adityanath-led BJP administration.

On account of being a Gorakhnath sect mahant, Yogi claims to have no caste, but his Rajput origins are often used to criticise his government as a pro-Rajput regime.

As the election nears, expect more caste-based rallies and meetings because in spite of claims of overall progress and social mobility, caste remains the key to win an election in Uttar Pradesh.