There's no hope for BSP until Mayawati wakes up

A clamour is growing within the party to go back to the basics.

Mayawati took the lead in announcing BSP's candidates for the UP polls even as the rival BJP and SP-Congress alliance were struggling with infighting and groups trying to wrest maximum tickets within the party.

Her candidates had the distinct advantage of time during the crucial election period to campaign and swing the voter sentiment in the party's favour.

She proudly proclaimed she had given the maximum number of tickets to the Muslim community and also tried to stoke fear among the minority community by reiterating that the SP may forge an alliance with the BJP post polls.

She seems to have spent all possible cartridges at her disposal now. With the 2017 formula she drove away a chunk of Dalit vote while the much expected Muslim polarisation never happened in her favour.

Now a clamour is growing within the party to go back to the basics, almost like that of Kanshiram. The damage has however already been done. Chunks of Dalit votes of the swarna vote have moved towards the BJP.

Mayawati appeared confident till a day before counting began for the UP Assembly election and went to the extent of saying that the PM had lost the body language and the BJP would come a distant third.

The results must have been a bolt from the blue on Mayawati, who has often been accused of being unapproachable despite calling herself a Dalit leader.

Her calculations went wrong and the BJP with perfect acumen succeeded in divide and rule. Post results, she was the first to raise doubts on the EVM machines and wanted paper ballots to return. 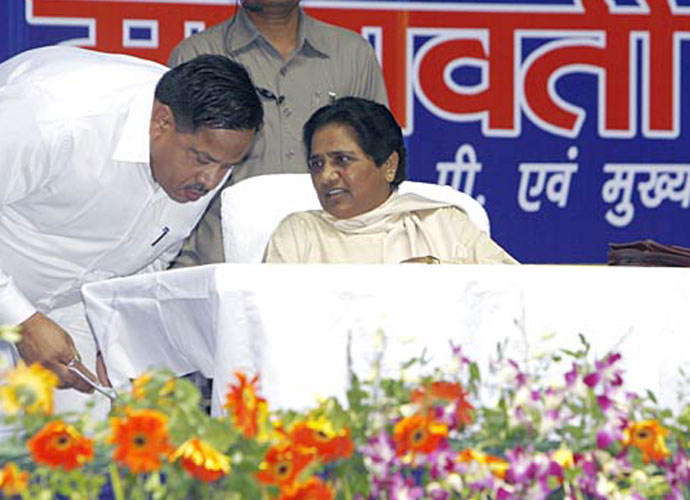 The divide within the BSP is an open secret. Photo: India Today

As the state's Yogi Adityanath government now hogs the limelight with visible efforts of streamlining the state machinery and taking harsh decisions, the rivals are sulking as they are not in a position to find the desired ammunition to nail down the present government.

With just 19 seats, the SP was battling a family feud and anti-incumbency and was a much emaciated rival as compared to 2012. Even Mulayam Singh Yadav kept away from campaigning.

Since Behenji calls the shots herself and no second line of leadership has been allowed to mushroom within the party, the onus of a humiliating defeat also has to be shared by her. Unlike Kanshiram, from whom she inherited the Dalit legacy or rather wrested it, she failed to be a rabble-rouser like her patron.

She acquired the image of being confined to her own self and created an ivory tower far away from the reach of a common man. She became unapproachable as a seemingly overwhelming arrogance pervaded her.

Even the BSP's ticket distribution became much talked about in political corridors, with unsubstantiated allegations of them being sold.

A party which rose to the level of a national party got reduced to one of its most abysmal performances in UP, forcing a real introspection. During three such introspection meetings, abuses flew in plenty and the divide in the party came to the fore.

Senior leader Nasimuddin Siddiqui had to virtually flee from a couple of such introspection meetings where the divide within the party became an open secret. The muffled voices of revolt against Mayawati have been unmuted post results.

Her winning formula has developed chinks that are glaring. And chances are that she may not be able to cobble her winning formula of Dalits, forward castes and sections of the minority vote successfully yet again.

Sections of the Dalit vote barring the majority Jatavs seem to have drifted away from her and inched towards the BJP. The minority too did not repose faith in her to the extent they did with the SP and worse still, by lapping up the highly emotive issue of triple talaq, the BJP tried to wean away a chunk of minority women.

Mayawati was confident of a sail-through, possibly turning a blind eye to her punctured boat.

A wake-up call should have come to her when party stalwarts like Swamy Prasad Maurya, RK Chaudhary, Dina Nathan Bhashkar and Brajesh Pathak deserted her to strengthen the BJP with hundreds of dedicated cadre at the mandal and district level.

Much later, the open defiance by BSP's Ganga Ram and Kamla Kant Gautam post results, was the first indication of discontent against Mayawati. This is bound to have a cascading effect.

The formulas have been exhausted. No new formula is in sight for her. And till she comes out of her ivory tower, any hope will elude the party.

Post your comment
#Assembly elections 2017, #BSP, #Mayawati
The views and opinions expressed in this article are those of the authors and do not necessarily reflect the official policy or position of DailyO.in or the India Today Group. The writers are solely responsible for any claims arising out of the contents of this article.