Battle of equals: What the MCD by-election stakes are

The head-on fight between BJP and AAP is premised on the narrative of misgovernance in the MCD.

With the announcement of MCD by-elections to be held on the last day of February, the principal contenders for power have been preparing the ground for a battle of equals. The by-elections may just portray the curtain-raiser to the final show later next year. Despite the exigencies of the pandemic, MCD has been the bone of many contentious debates and scams. The political effervescence is alive amid the diminishing public trust in municipal administration in Delhi. The regular strikes by municipal staff, inability to pay salaries, scams in the maintenance of landfills, lack of will to contain pollution and others point to the impending collapse of political ingenuity in structuring governance at the municipal levels. 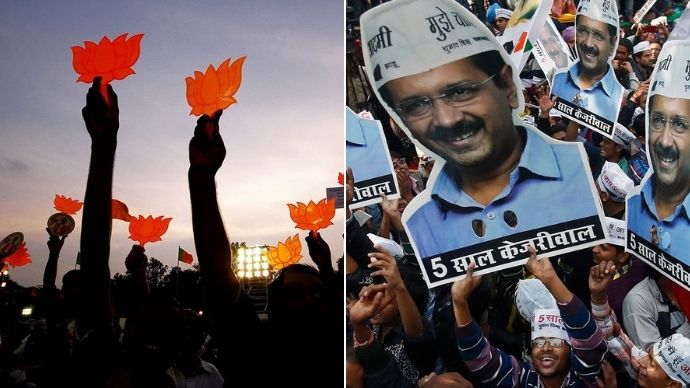 The head-on fight between BJP and AAP is premised on the narrative of misgovernance in the MCD. (Photo: Reuters)

In the April 2017 MCD elections, the BJP won in 181 of the 272 wards of the city. AAP won in 49 wards finishing at the spot of a distant second while the Congress came third with a win in 31 wards. The MCD elections to be held in 2022 will be AAP's second tryst to win the municipal contest. The main idea that will rule the roost in the by-election is political corruption in the MCD, be it in the case of sanitation or financial management.

The allegation has largely been that corruption like mite has destroyed the very architecture of citizen-centric urban governance bodies in Delhi. The Aam Admi Party has been at loggerheads with the BJP, bringing to the forefront its fundamental problems of conflict with the public interest. The MCD is fraught not only with administrative malpractices, but also rampant mismanagement of public resources. The kleptocratic nature of the MCD has exposed democratic vulnerabilities in grassroots governance structures.

The head-on fight between BJP and AAP is premised on the narrative of misgovernance in the MCD. The most conspicuous debate is centred on the malfeasance in offices of municipal administration in Delhi. Sanitation has been a fringe concern for the municipal administration. The management of the three landfills and the impending health hazard affecting the lives of millions of Delhiites has been a controversial contest. However, the underlying factor that has been at the root of the ailing MCD is financial bankruptcy. The bank accounts of the MCD testify the state of bankruptcy that has hit them. The North and East Municipal Corporations have Rs 12 crore and Rs 99 lakh in their bank accounts respectively. In addition, they have a loan of Rs 6,276 crore to be paid to the Delhi government. In an ideal situation, municipal administration is expected to self-generate resources to adopt innovative technologies that respond to the recurrent needs of the city.

The pauperisation of the MCD has pushed the limits of its culpability. The inability of MCD to pay salaries to the MCD-employed staff, be it frontline medical warriors, teachers, pensioners or sanitation workers in the times of the pandemic, is commonplace. Every now and then, municipal employees are protesting on the streets of Delhi or are seen at candlelight vigils at Jantar Mantar. The blame game between BJP-ruled MCD and the Delhi government thawed when the latter addressed the problems of non-payment of salaries to staff by adjusting its budget for development schemes and paying Rs 938 crore additionally for salaries. Are funds being siphoned off, or is it a case of gross financial mismanagement? In both cases, the burden of political corruption falls on the taxpayer.

The buck does not stop here. Political strategising of BJP through widespread advertisement across the length and breadth of Delhi brought visibility to the deepening of the crisis. The belligerency between the two political parties largely has been over the question “who owes what to whom?” BJP’s demand of Rs 13,500 crore as dues from Delhi government versus the financial irregularities of Rs 2,500 crore in North MCD as alleged by AAP has been the poster slogan all over Delhi. Apparently, Rs 2,500 crore was the rent payable for the SDMC office at Civic Center, which is owned by the North MCD. But in this year’s budget, the rent payable is earmarked as zero and thereby, unravelled the mystery of the missing Rs 2,500 crore in the MCD.

In December 2020, the Delhi Assembly passed a resolution vide voice vote demanding a CBI inquiry into the alleged Rs 2,500 crore scam in the municipal corporations in the capital, escalating the ante for confrontation with the BJP. The charges of embezzlement have exposed the vicious circle of transactional corruption that has had the MCD in its grip for a long time now. The financial incapacities of the municipal administration have precipitated into an institutional crisis.

In this power tussle, both AAP and BJP have found political opportunity to consolidate their electoral base for the upcoming MCD elections. AAP has revived Mohalla Sabhas to campaign massively, among a 2.5-lakh audience, against the corrupt practices of the MCD. Mohalla Sabha was a grand design to penetrate every corner of the urban hinterland to woo voters with the promise of people-centric governance in the municipalities in Delhi. It was an app-administered innovative mediation mechanism to ride on the trust deficit that BJP evoked. Reinvigorating political entrepreneurship in urban ecology could cleanse the cog in the wheel for developmental goals.

Municipal administration as envisaged by the Constitution was the fulcrum of participatory democracy. Municipalities in Delhi for the past 15 years have encountered no political fizziness and have reinforced the status quo. Responsible, accountable, and responsive municipal administration cannot be a lost opportunity for Delhi. A catalyst for transformation could be found in the politicisation of the civil society. New spaces in public spheres could negotiate power relationships between the state and the citizens.

#BJP, #Aam Aadmi Party, #Mcdelections
The views and opinions expressed in this article are those of the authors and do not necessarily reflect the official policy or position of DailyO.in or the India Today Group. The writers are solely responsible for any claims arising out of the contents of this article.