Why MCD bypolls were the litmus test for AAP

The bypolls were a litmus test for AAP to prove its political mettle as the best alternative in the MCD.

Elections are the sine qua non of democracy and municipal governance establishes the resilience of grassroots legitimacy of a participatory form of government. Delhi, being the power seat of the government in India, has always been important in that sense. The performance of the Municipal Corporation of Delhi has therefore been consequential for both the Centre and the State. In more ways than one, the centre-state relations are defined by municipal politics in Delhi.

On February 28, 2021, Delhi went to bypolls for five MCD wards; two wards under the North Delhi Municipal Corporation (NDMC) and three under the East Delhi Municipal Corporation (EDMC). The BJP has controlled all three corporations for over a decade. The voters’ turnout in the bypolls saw a slight rise since 2016. The voters’ turnout in the MCD byelection in 2016 was 45.6 per cent while on Sunday, around 50.86 per cent of voters turned out to vote in the MCD bypolls for five wards. Voting was higher in the EDMC wards (56.92 per cent) than in the NDMC wards (44.05 per cent). Overall, 50.53 per cent of men and 51.15 per cent of women voted in the elections. A higher voter turnout projects higher salience context to issue-based politics. 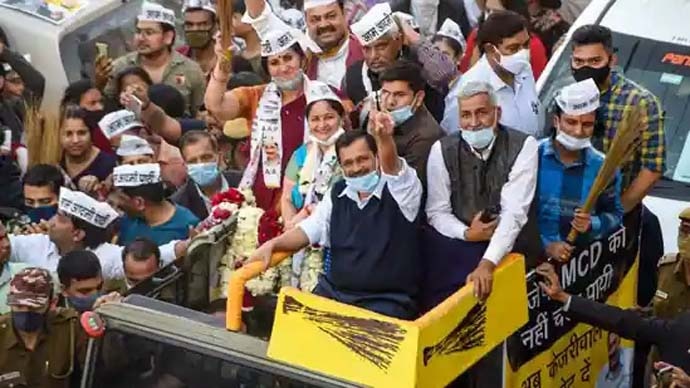 The intense political mobilisation strategy of AAP with aggressive door to door-to-door campaigns and popular roadshows triggered the populist disposition against the ruling BJP in the MCD. (Photo: PTI)

The MCD bypolls gave a massive mandate to Aam Aadmi Party on four out of five seats. A closer look at the voter percentage for AAP shows that in two wards - Kalyanpuri and Shalimar Bagh — the AAP candidates crossed the threshold of 50 per cent. Trilokpuri and Rohini-C saw more than 45 per cent. The penetration of AAP in the BJP stronghold hinterland — Shalimar Bagh — is a feat in itself. The loss of the seat in Chauhan Bangar points to the sympathy votes for Congress and also the need for AAP to strengthen its trust among the minority communities. A more robust policy intervention towards the eradication of religious discrimination is the way forward.

Delhi is the new bastion of the AAP. BJP has been decimated to no-win while Congress bagged one seat. The poll campaign strategy of AAP, to unfold the story of gross mismanagement of the MCD by the BJP for more than a decade, found resonance in public sentiment among the electorate. The myth of the silent saffronisation of the common man in Delhi stands busted despite the aggressive Ram Mandir donation campaign in the past few months. The intense political mobilisation strategy of AAP with aggressive door to door-to-door campaigns by karyakartas, padyatras by political signatories like MLAs, a popular roadshow by Delhi Deputy CM Manish Sisodia and CM Arvind Kejriwal triggered the populist disposition against the ruling BJP in the MCD.

The waning of ballot fatigue showcases how creative mobilisation by political parties can have an impact on election outcome. With a Young Turk, Durgesh Pathak, being appointed as the MCD-in-charge, the idea of election canvassing changed and AAP emerged as a forerunner in critical engagement with the masses. Large scale Mohalla Sabhas in all wards of MCD played an important role in manufacturing public opinion against corruption in the MCD as well as bolster its support base among the youth. Engaging the electorate with everyday issues that de-alienate them and push them away from voters’ apathy is an achievement of AAP.

Conscientiously, AAP exposed the electorate to the massive corrupt practices that ruined the municipal architecture of Delhi. The fund crunch and the bankruptcy that BJP assigned as the reason behind the financial breakdown of the MCD have rubbed the people the wrong way. Legitimately, delay and non-payment of salaries and pensions to MCD employees brought the city to a standstill. Many sad stories emerged in candlelight vigils that highlighted the hardships of the salaried middle classes during the pandemic.

The comparison between the MCD and the Delhi government model of development is capturing the public imagination at the speed of light. The middle classes of Delhi are on the edge of understanding the dynamics of opportunity costs in electing responsive and responsible governments. With the taste of innovative changes in systemic structures at the state level, it is only obvious that the electorate will bargain for better governance at the municipal level. The interest of the poor and lower-middle-class in the city has been jeopardised by the poor education and health infrastructure of the MCD. The deplorable conditions of MCD schools and hospitals have often been juxtaposed against the Delhi government-administered ones to prove how accountability scores higher than corruption.

The bypolls were a litmus test for AAP to prove its political mettle as the best alternative in the MCD. The 2022 big-ticket MCD elections will be the real battle between the two principal contenders — BJP and AAP. The spirit of electoral democracy has to be strengthened by greater politicisation and more effective connect between the stakeholders, political parties and voters. Delhi has to capitalise on its development goals without compromising on malfeasance.

#Municipal corporation of delhi, #BJP, #AAP, #Mcdbypolls
The views and opinions expressed in this article are those of the authors and do not necessarily reflect the official policy or position of DailyO.in or the India Today Group. The writers are solely responsible for any claims arising out of the contents of this article.