7 reasons Meghalaya is much more than rain and nature

From being India's rock capital to the pioneer of Swachh Bharat, the Northeastern state has a lot to her credit.

Meghalaya, or the "abode of clouds" doesn't fall short of taking your breath away, quite literally. Even when you are actually standing in the valley, you are stumped by the sheer magic of the clouds. Quoting an Ed Sheeran song "I see fire inside the mountain" would do some justice to it. It's truly that gorgeous: clean, green and the cloud cover is a constant. Not many are aware that Cherrapunji, one of the wettest places on earth is an hour-and-a-half drive from the capital city Shillong. Natural haunts like the Nohkalikai and Seven Sister Falls flow just like their stories. While the former is a tragic legend, most of the tourists are under a false impression that the latter are called so, as each of the falls represents the Seven Sister states; when they really form a seven-segmented waterfall together. Clouds around these falls are often so dense that tourists have to be content with listening to the thunderous flow of the water, crashing hard on the rocks below. Once you are inside the Mawsmai Caves, carrying torches through the dark narrow passages, holding tight to the limestone stalactites in the fear that you might just turn into the stalagmites, it feels like you're on the sets of the early 1990's Nickelodeon show, The Legend of the Hidden Temple. 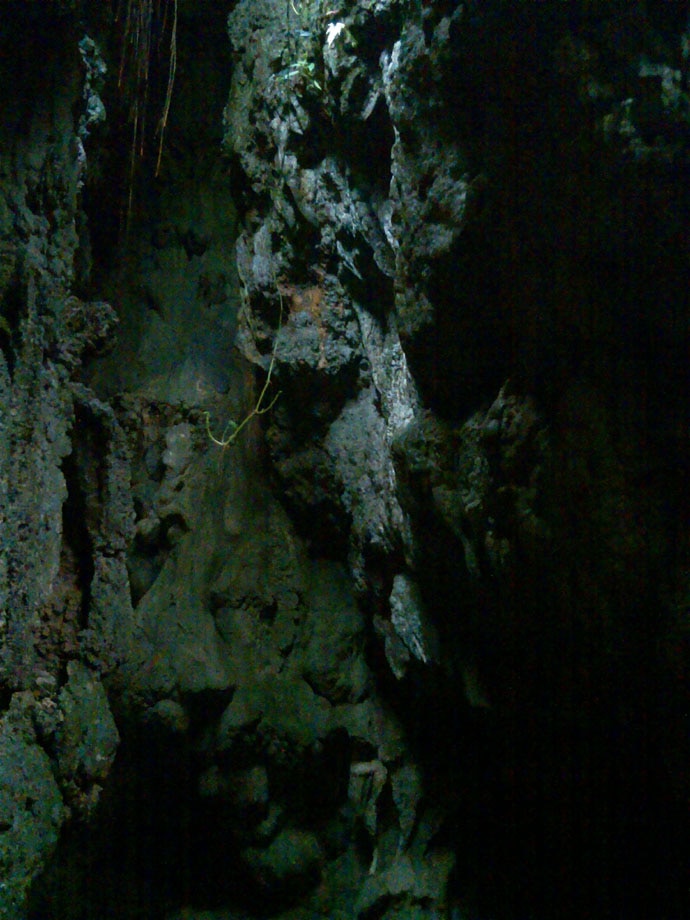 While travelling around, you'll easily find tree houses in the city, made purely out of bamboo sticks and threads, from top to the bottom; constructed without any nails! There are times on the highways when you are unable to see the road; with 25m being the maximum visibility. You actually have to drive through the clouds, sometimes even at noon. It feels like it's either monsoon or winter in Meghalaya.

Living Root Bridges are perhaps the most unique natural wonder that Meghalaya can boast of. Numerous intermeshed aerial roots of living banyan fig trees speak volumes of the brilliant craftsmanship of War Khasi and War Jaintia tribes. Around 50m in length, these are an epitome of how man and nature can achieve great things if they work together. 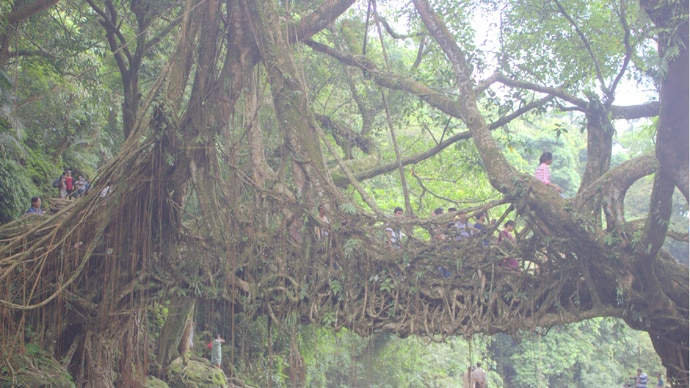 But Meghalaya is not just rain and nature.

Here are seven reasons why the Northeastern state needs to be highlighted other than its charming landscape:

1. Matrilineal society: It has often been wrongly projected that the Khasi community (the indigenous tribe) is a female-dominated society. Women are revered (called "Lukhi Mai" or the Goddess of Home) and not just symbolically in the local festivals. The youngest female of the family is called "khad duh" who is the ancestral custodian and is responsible for looking after her parents. This is why she gets the largest portion of the assets on the execution of the family will. Also, the man who marries the khad duh has to move in with her. 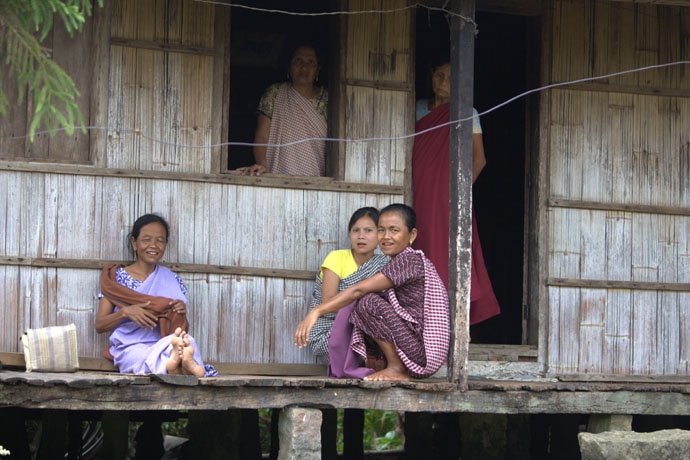 The head of the family/clan is actually the maternal uncle (called "kur"). He acts as the khad duh's guardian and helps her in making decisions, until she attains the legal age.

The Khasi model of matrilineal society is an example in a time where tradition has often been used as an opportunity to harbour gender bias and show-off in the garb of worshipping women.

2. Foodie's delight: A restaurant-on-wheels a block away from where I live in Delhi sells some delectable momos. But these can never ever hold a candle to the heavenly pockets of awesomeness that I had in the Khasi hills. The place maybe home to the hottest chillies but the region's staple food is neither spicy nor oily. 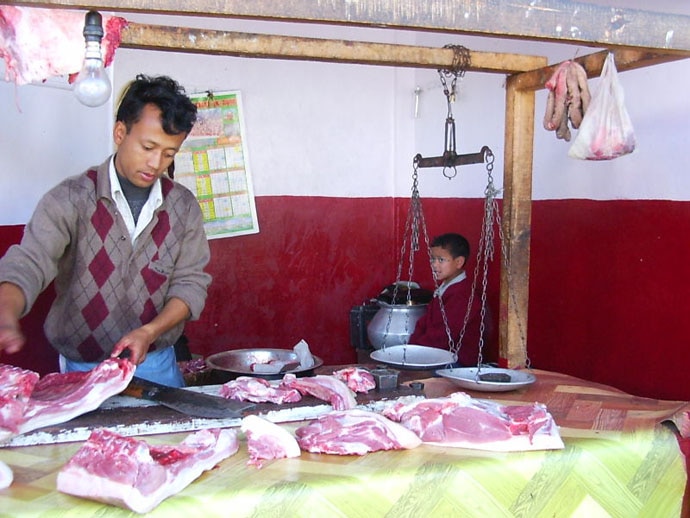 With pork and beef hanging around in almost every second meat shop, the only vegetarian meal I could find was a platter of plain rice, yellow dal and okra. Professor Arawin Tariang admits: "They are practically the aloo-pyaaz of the Northeast."

3. Art: From marble statues of every possible Northeastern tribe to more than 30 types of handmade weapons to the process of making rice beer, Shillong's Don Bosco Museum is worth the visit. 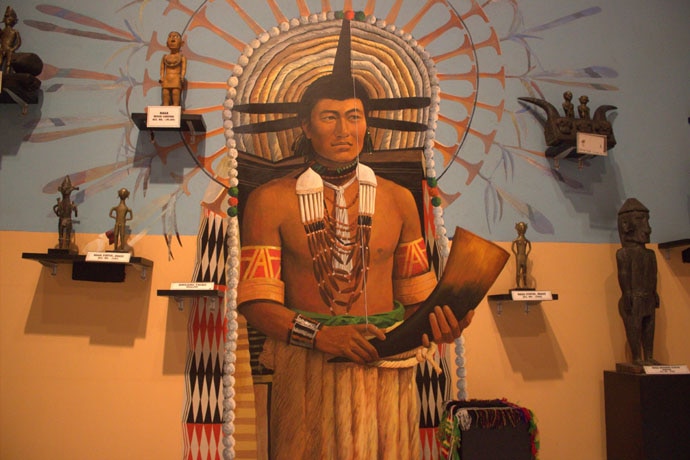 A mural in the Don Bosco Museum.

The best part about the museum, perhaps, is how efficiently it showcases all the Seven Sister states under the same roof. The entire museum is technologically sound and each floor has a its own multimedia corner, giving you insight into all major exhibits. It's like Disneyland for an art addict.

The panoramic view of the entire city from its roof; you see houses, streams, gardens, football grounds, churches, and of course, the clouds slowly descend over the mountains. One word: bliss.

4. India's rock capital: Celebrated local artist Lou Majaw tells me: "One of the most popular haunts, Café Shillong is simply electric with different tunes of country, folk, jazz, R&B simmering in the air, especially on a Sunday evening." This year in October, Bacardi NH7 Weekender kick-started its five-destination musical tour from Shillong. An understatement but did the Khasi Hills come alive with Parikrama, The Wailers and other bands.

5. Swachh Bharat: Where even after a year after it's inception, other states are still struggling with the cleanliness drive, Meghalaya has been running its own Clean India campaign for centuries now. 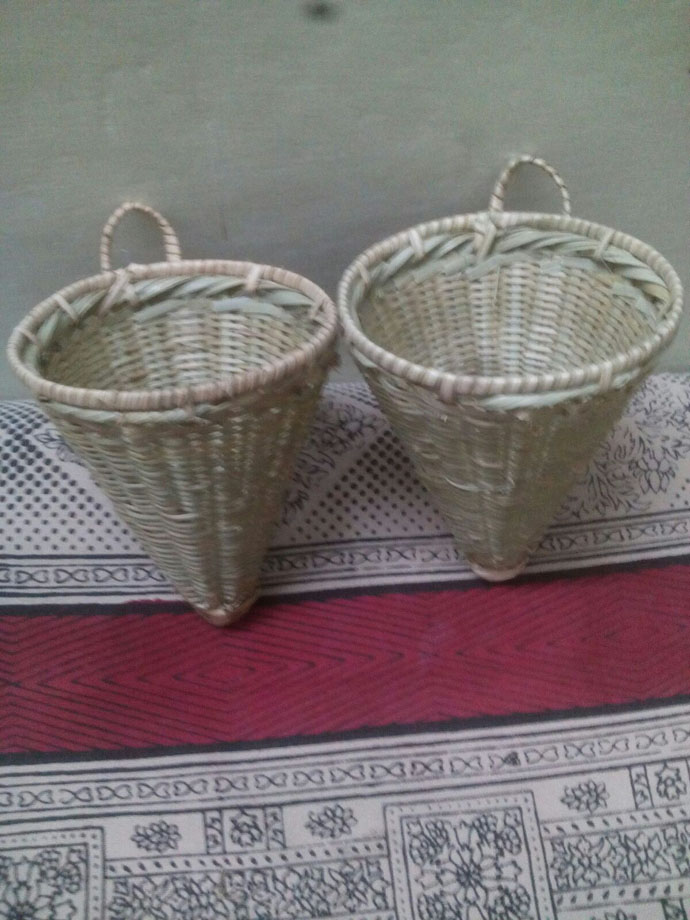 There is not even a single corner without a dustbin. Forget trash, even their bins (called khohs) are eco-friendly... Khohs are bamboo baskets, and putting away garbage is just one of the many uses. Available in almost every possible size, a khoh can be used as a wall-hanging and also a chair! But cleanliness doesn't end there. 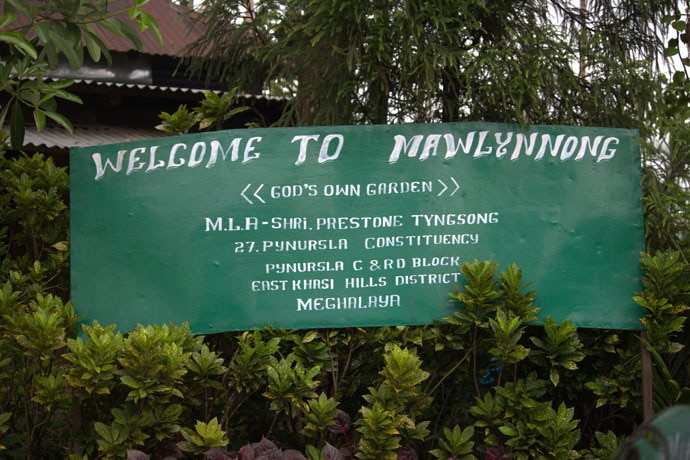 Mawlynnong, the cleanest village in Asia.

Situated at a distance of 90km from Shillong is Mawlynnong, which has been awarded the cleanest village in Asia, third year in a row by Discovery India.

6. Education: In his opening address at ASEAN-India Summit in November this year, Prime Minister Narendra Modi announced the opening of ASEAN Studies Centre at the NEHU (North East Hill University). Professor SK Srivastava, NEHU vice-chancellor says that owing to its location, Shillong can be further developed as an education hub and also play an important role in the Act East policy. Also with IIM-Shillong and St Edmund's College, Meghalaya has more than one major education centre to its credit.

7. Etiquette: Due to narrow single-lane roads, the traffic in Shillong is one-way. In case of a roadblock, it's understood that one has to shut the vehicle engine and wait. As this is the only feasible (and polite) thing to do; a rarity in most of our cities. What say, Shimla and Nainital and also our dear, dear metros? Nobody honks, unless there's something that qualifies as an "emergency".

Also read: Why people from the Northeast are so fashionable

Post your comment
#Swachh Bharat, #Beef, #Shillong, #Meghalaya
The views and opinions expressed in this article are those of the authors and do not necessarily reflect the official policy or position of DailyO.in or the India Today Group. The writers are solely responsible for any claims arising out of the contents of this article.