Article 35A and Article 370 of the Indian Constitution have been a sensitive issue for the people of Kashmir. Partisans, on all sides, have created polarising narratives around these Articles.

While on the one hand, Article 35 A and 370 have been lampooned as 'the original sin' behind the troubles in Kashmir, on the other, the erosion of Article 370 has been touted as the ultimate proof of disregard and betrayal.

The Presidential Order has safeguarded the special Constitutional position of J&K and respected the sanctity of the J&K Legislature – which has never been the case when the National Conference (NC) was in power. On 13 November 1974, the Beg-Parthasarthy Accord was signed on J&K. On 24 February 1975, the then-Prime Minister Indira Gandhi said the clock can't be turned back. As if moving on a script, the National Conference followed this up by saying that "J&K is not an issue" anymore. 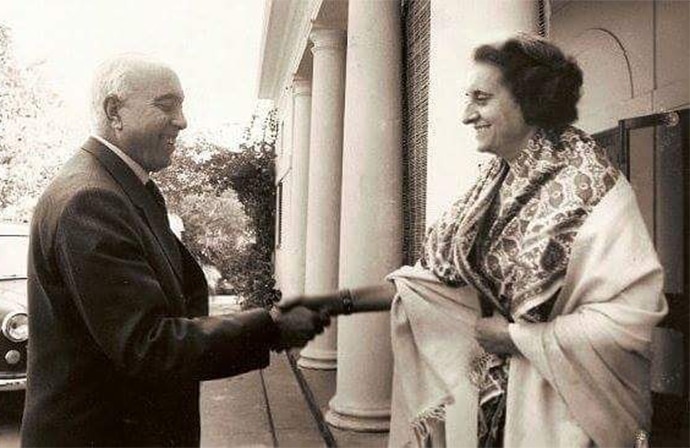 The party reaped this betrayal's harvest on 25 February 1975, when Sheikh Abdullah took an oath of office as Chief Minister – the only legislator from the National Conference with the wholesome support of 58 Congress legislators.

This was followed by a Presidential order which took away the powers of the J&K Assembly to make laws without the President's consent, rendering the highest seat of governance in the state impotent.

The last vestiges of the state's Constitutional position were trampled upon on July 30, 1986, when the power of Parliament to make laws on state list subjects was applied to J&K. Four months later, Dr Farooq Abdullah signed an accord with then-Prime Minister Rajiv Gandhi. The NC teamed up with Congress to denude J&K's political powers. (Photo: Facebook)

This was all the lust for power.

If there is one party that has lynched the Constitutional morality of the state of Jammu and Kashmir, it is the National Conference, of course, with the overt and covert support of the Congress.

The party kept harking on the issue of 'erosion of state's fiscal autonomy', but the Presidential Order has belied all those claims.

The facade has fallen. The politics of deceit and hypocrisy stands exposed.

Today every Kashmiri, from mainstream politician to separatist, from well-to-do person to a common man, simply everyone is apprehensive that the possible scrapping of Article 35A would open the sluice gates for a demographic transformation of the Valley — an objective propounded by Hindu nationalist groups as the ideal solution to the Kashmir problem.

Mehbooba Mufti always, and moreover in the last three years, fought what everyone is fighting now – her silent exertions from the past years is on the roads now. Protesters against tampering with 35A on the roads now. (Photo: ANI

Whenever our Party President Mehbooba Mufti met the Prime Minister and Home Minister of the country, she used to seek assurances and keep telling them about safeguarding the Articles that grant special status to our state. She has been vocal at various platforms, be it BRIEF or other summits, about the consequences of tinkering with, and the importance of safeguarding the Articles 35A and 370. In strong words, she said that there will be no one in the state to hold the Tricolour if any sort of tinkering happened with the Articles of the Indian Constitution that pertain specifically to the state of J&K.

The People’s Democratic Party (PDP) had prepared all the requisite documents in May and this was to be filed latest by the end of July, but unfortunately, the government fell on June 19. We still had one and a half months to do this if the government had not fallen. Mehbooba Mufti had always taken up the 35A matter with the Governor.

She did so again first thing when she met him immediately after the government fell.

She took to Twitter on June 22 when she met the Governor of the state and tweeted, “Met Governor N. N. Vohra today to thank him for his guidance & support & to wish him all the best. Impressed upon him the need to safeguard Article 370 & Article 35A, for which we had been fighting a case in the Honorable Supreme Court.” (Sic).

Met Governor N. N. Vohra today to thank him for his guidance & support & to wish him all the best. Impressed upon him the need to safeguard Article 370 & Article 35A, for which we had been fighting a case in the Honorable Supreme Court. 1/2

Pertinently, Mehbooba Mufti had got the best lawyers to defend 35A during the tenure of her government but also took it up at the highest level, threatening to withdraw from the government if this was fiddled with.

Now, it is not about how many parties get lawyers to defend this – it is more of a political call which the NDA government has to take if they don’t want to see the whole state burning.

On June 24, Mehbooba Mufti again took to Twitter and tweeted, “Status quo on Article 370, dialogue with Pakistan & Hurriyat were a part of AoA. Encouraging dialogue, withdrawing cases against stone pelters & the unilateral ceasefire were much-needed measures to restore confidence on the ground. This was recognized & endorsed by BJP.” (Sic).

Status quo on Article 370, dialogue with Pakistan & Hurriyat were a part of AoA. Encouraging dialogue, withdrawing cases against stonepelters & the unilateral ceasefire were much needed measures to restore confidence on the ground. This was recognized & endorsed by BJP. 2/6

The atmosphere got charged with the decision on Article 35A and the blame game in the state of J&K started.

Our party, over the last three years of the coalition government, upheld and safeguarded the Articles.

On August 3, Mehbooba Mufti again said on social media, “My father took great pride in the special status that J&K enjoys under Article 370. He would often mention that while people of the state have made great sacrifices for larger goals, we need to safeguard what we already have.” (Sic)

My father took great pride in the special status that J&K enjoys under Article 370. He would often mention that while people of the state have made great sacrifices for larger goals, we need to safeguard what we already have. 1/2

She always tried to remind the government of India of the possible ramifications if there was tinkering with Article 35A. On August 3, with a strong message to India, Mehbooba Mufti wrote, “Today people cutting across party lines & other affiliations are united in their fight against any dilution of Article 35 A. As I have already stated before, fiddling with J&Ks special status will have catastrophic ramifications for the entire country.” (Sic)

While we may discuss and debate the legal nuances of the state's relationship with the rest of the country, we need to be wary of a situation wherein we may be 'chasing the shadows and losing the substance'.

The government of India should have other, very relevant factors that need to be taken care of. It may be worthwhile to lend a patient hearing to the youth of Kashmir, involve them in future plans for the state and moreover, look to create employment opportunities for them.

Tinkering with or scrapping these Articles that grant special status to the state of J&K will only create alienation, will push more youth to the wall – and will have serious consequences, not just for the state, but the whole country.