South Kashmir these days is an almost impregnable fortress within the fortress that the Valley as a whole has come to be. It is girded with barbed wires and is being constantly watched. Behind these barbed wires, scores of people are losing their lives in the macabre cycle of violence that defines Kashmir, when the poetry over the beauty of the Valley’s landscape meets its grotesque reality on the ground. 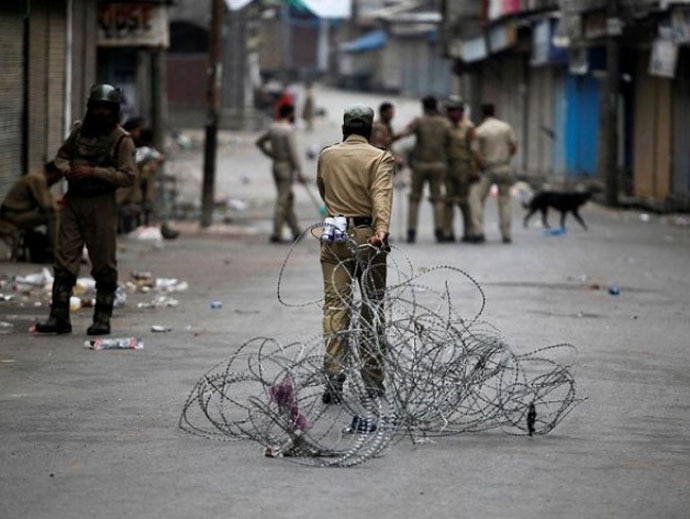 Kashmir is a virtual fortress for far too long now. (Source: Reuters)

There is mourning and there is anger, broadly in four districts of the Valley where Kashmir watchers have fixed their gaze — Pulwama, Anantnag, Shopian, Kulgam.

A people mourning and seething in anger could be a politician’s most dreaded zone to venture into — but Jammu and Kashmir Peoples Democratic Party (PDP) leader and former chief minister of J&K, Mehbooba Mufti, is unfazed by the risks lurking ahead. She is venturing into the militancy-torn south Kashmir districts in her bid to reach out to people.

Mufti is not just meeting the families of militants but also speaking up for them.

The PDP has in the past too been seen as a party that is ‘soft’ towards militants — but this venturing into south Kashmir’s most dreaded zones is a bold move in light of the fact that no political party worth its salt in the Valley has ventured into south Kashmir in the past three years since militancy peaked in the area.

Mufti is treading the death zones of south Kashmir at a time when the security situation is so bad that during the panchayat elections held in December 2018, no polling was seen in Shopian and Pulwama. Of the 2,135 halqas in the Valley, no candidate stood in 708, meaning they remain vacant. Kulgam had no polling in 99 per cent of halqas and no candidate for 87 per cent of its sarpanch posts. Anantnag saw no contest in 76 per cent of its halqas. But the PDP is speaking up for the ‘families of militants’.

It is important to note here that several political leaders, including those belonging to the PDP, have been killed in south Kashmir by militants over the past couple of years.

“There are no militant families, there are, of course, families of militants,” says Waheed Ur Rehman, PDP spokesperson and president, Youth PDP.

“PDP is committed to raising their concerns. We are only trying to say that harassing the families of militants is not fair. A mother will feel for a son even if he turns a militant. You can’t punish a mother for loving her son,” Rehman says.

But why is Mufti suddenly feeling the pain of these people?

The PDP won 28 seats in the Assembly elections held in the state in 2014, emerging as the single largest party.

The party won 11 out of the 16 seats in the south Kashmir region. But the PDP’s alliance with the BJP is believed to have lost the party a lot of goodwill — Mufti is apparently venturing into south Kashmir in a bid to regain that goodwill.

Mufti’s troubles include not just the fear of fishing for votes in Kashmir’s most dangerous zone, but also sharp criticism from her political opponents.

“There is no doubt that people are angry with us. But that vote is not going to the NC or Congress either because people are angry with them too. There is a vacuum. People in south Kashmir want the political leadership of the state to speak for them that is Mehbooba Mufti is going and meeting the distraught families,” Rehman said.

“It is not our job alone. Other parties too should go and meet people and reassure them,” he said.

It is not just the people who are angry though. The PDP has been hit a by a sudden barrage of MLAs quitting the party one after the other. The walkouts started almost immediately after the BJP announced it was parting ways with the PDP.

But south Kashmir is just one part of Mehbooba Mufti’s ‘comeback strategy’. Mufti is working on several fronts — all at the same go.

On the recent occasion of the death anniversary of her father and party founder Mufti Muhammad Sayeed in Anantnag, she invited the youth to join the PDP. At a time when many have quit the party, Mufti is making efforts to get newer faces into the party.

Quite interestingly, she is also fitting herself into the mould of a pan-India Muslim leader — significant given that she has in fact led the only Muslim-majority state of the country.

Currently, the All India Majlis-e-Ittehadul Muslimeen (AIMIM) leader Asaduddin Owaisi has emerged as the sole pan-India 'voice of the Muslims'. But Mufti’s strategy could help her appear as a serious contender for that space.

Interestingly, the trible talaq legislation does not apply to the state Mufti even represents.

In December 2018, she attacked the National Investigation Agency (NIA) over the arrest of 10 people in Delhi and Uttar Pradesh.

The arrests were made on the basis of the recovery of ‘sutli bombs’, she had said.

National security is supreme. But declaring suspects as terrorists on the basis of Sutli bombs, associating with the dreaded IS is premature. It has already devastated their lives and families. NIA must learn from earlier episodes in which the accused were acquitted after decades

Party insiders say women from across the country are reaching out to her because she is being seen as a Muslim woman leader.

A daring Muslim woman, who is not scared to step into the wilds of extremist strongholds, could be just the positioning that could catapult Mufti to the CM’s chair once agains when the state votes in 2019.

From there, a larger stage may await.

Also read: If you ban the pheran, you're banning Kashmir itself