US Permanent Representative to the UP, Nikki Haley, pushed for this resolution and ideally, she would have liked to depart from her position at the UP with a victory on this resolution. But that was not to be though she was right to underscore the hypocrisy of the UNGA when she said that despite more than 500 General Assembly resolutions condemning Israel, not one condemning Hamas has ever been adopted. Haley has been a strong supporter of Israel at the UP but could not get the first ever anti-Hamas resolution she so coveted.

However, India’s diplomatic manoeuvring was not simply a vote against the US resolution. It first voted with the US in the procedural round to determine whether the simple majority or two-thirds majority rule should apply and supported a simple majority procedure. The US lost that vote narrowly, failing to garner support from some of its closest alliance partner like Japan. And then India abstained when it was clear that the US would not be able to muster a two-thirds majority in the UNGA for its resolution. 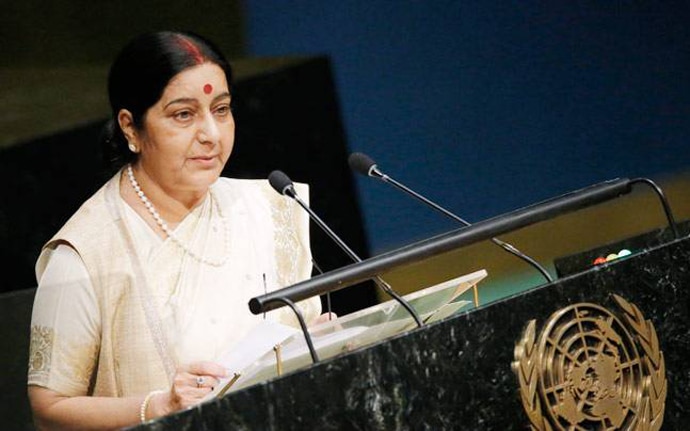 It cannot be denied that the Modi government has re-defined India’s Middle East policy. (Photo: Reuters)

India’s abstention has attracted a lot of attention in India and abroad with critics pointing out the dangers of India, one of the worst sufferers of terrorism, seemingly condoning terror with its abstention. It has also been suggested that with this vote, India is signalling that it is not committed to upholding its ties with its closest partners like Israel when it comes to the crunch. After all, for a nation that is on a worldwide mission to isolate Pakistan because of its support for terrorism, it is important to demonstrate its commitment to the cause even when it pertains to other nations.

All this is true and in an ideal world, New Delhi would have had the luxury to take such black and white positions. But much of international relations exist in the grey zone and Indian diplomacy, like other nations, is forced to make all sorts of compromises. Irrespective of this vote, it cannot be denied that the Modi government has re-defined India’s Middle East policy by de-hyphenating Israel and the Palestinian issue. It has been a bold policy move but underappreciated in New Delhi and beyond. India’s ‘balancing’ act in its relations with Israel and the Palestine has ended for all practical purposes.

During his Israel visit in 2017, the first of an Indian Prime Minister to Israel, Narendra Modi not only did not visit Palestine but also did not mention the Palestinians in public.

Though New Delhi hosted Palestine Authority President Mahmoud Abbas in May 2016 before Modi’s Israel visit and had reassured him of India’s “unwavering” support towards the Palestinian cause, there was no public hectoring about the Palestinian issue. There was also no mention of East Jerusalem being the capital of the future Palestinian state during Abbas’ visit as New Delhi made clear its preference in favour of a negotiated compromise between the two sides.

But New Delhi has important equities to preserve in the wider Middle East as close cooperation between India and Saudi Arabia, the UAE and Oman underscores. Before Modi visited Israel in 2017, he had already hosted or visited all major regional states. In fact, while there is much talk of Modi government’s ‘Act East’ policy, its ‘Look West’ engagement has been quite elaborate. And these relationships are no longer simply about oil as is often assumed.

As India’s political engagement with major regional players has grown, there now a renewed focus on defence and security cooperation. During Modi’s visit to Oman earlier this year, India secured access to the key Port of Duqm in Oman for military use and logistical support, enhancing New Delhi’s maritime imprint in the Indian Ocean. And recent extradition of the alleged middleman of the Rs 3,600 crore AgustaWestland chopper scam, Christian Michel, from the UAE to India underscores growing political synergy between India and the UAE. This is happening at a time when significant changes are underway in the political dynamics of the Gulf region. The Trump Administration has opened a new front against Iran and the Arab Gulf states and Israel are now working more closely than ever. Oman’s Sultan Qaboos bin Said welcomed the Israeli Prime Minister Benjamin Netanyahu in Muscat in October, the first visit of an Israeli Prime Minister to the Gulf in over two decades. At the same time, the gruesome murder of the Washington Post columnist Jamal Khashoggi has exposed growing divide between Saudi Arabia and Turkey even as Russia has emerged as a key player in the region.

As the West remains consumed with its internal problems, the Gulf states are looking for new partners and India’s pro-active engagement has given New Delhi a new profile. India’s role in the region is set to expand significantly in the realm of economics and security. India’s cautious voting at the UNGA is merely a small aspect of this larger shift.