Lateral entry into civil services: Why the Ministry of Defence needs it the most

The government’s decision of lateral entry into various ministries is a good move. The Ministry of Defence needs it the most.

The recent announcement by the government to laterally induct 10 joint secretaries into various ministries evoked a lot of reactions. The decision was much debated in the media, with everyone having a view over it. However, one thing came through clear — for a growing power, we need to have expertise beyond the standard IAS officers in the government.

Personally, I felt it was a good decision, and welcomed it. However, it left me bemused. I felt that we were approaching it from the wrong end. I did not see any post advertised for the Ministry of Defence (MoD)! 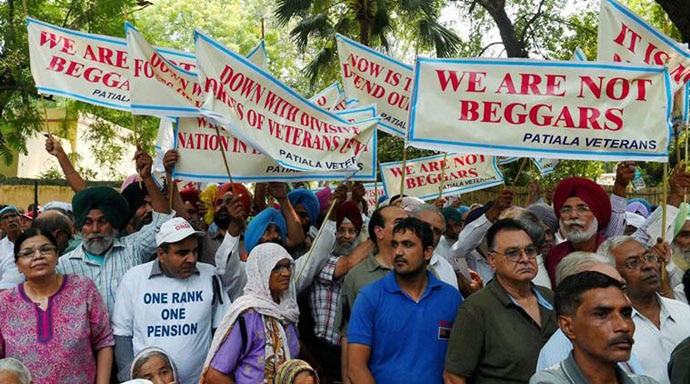 A bureaucracy that lets its veterans sit on a protest in public and then gets them arrested by police needs introspection. (Photo: PTI)

This is the ministry where niche professional knowledge and competence is the most needed. In fact, I have always considered that this is one ministry which is most the disintegrated, though it is designated as the Integrated Head Quarters of the MoD.

Am I being harsh? Just consider this.

Any bureaucrat in any ministry is supposed to serve and promote the interests of the personnel and organisations who are under that ministry. Right? It is only the MoD bureaucrat who has beautifully succeeded in gaining a reputation among service personnel that he is working against them — whether in equipping them, paying them or safeguarding their interests, and, as an extension, the interests of the nation.

A bureaucracy that lets its veterans sit on a protest in public and then gets them arrested by police needs introspection. That too after really having done so much for grant of OROP (which was not bad, despite some drawbacks that could have been ironed out). It was an international shame. The last time veterans were publicly humiliated, in my memory, was by the USA during the Vietnam War. India let itself down.

The incompetence of the MoD is contained in its own task force report on defence procurement — or the lack of it — which the honorable Dr Suresh Bhamre, MOS, reportedly submitted to the PM. It was a damning report. These episodes, from arcoss the spectrum of dealings in the MoD, point in just one direction. It is obvious enough to draw your own conclusions.

Why is this so?

That is because the MoD is manned by people who have very limited knowledge of defence affairs. The first variety is the IAS officers or other officers brought in on deputation from other ministries.  They are seeming know-it-alls and generally carry a chip of misplaced superiority on their shoulder.

The second variety is the Armed Forces HQ civilian cadre, who have very little knowledge beyond Delhi but are permanently near the levers of power. They seek parity with service officers, and hence ensure that the wrong levers are always pressed. The Services HQs are satellites in orbit manned almost exclusively by service officers. All these entities work in exclusive compartments; most of the time at cross-purposes with each other.

As eyewash, some service officers are posted in the MoD at insignificant positions. I have never dealt with a service officer in the MoD in any important appointment in all my assignments in Delhi. On the other hand, I always came across people dealing with important defence matters who had no clue about defence before they entered the portals of South Block. More importantly, they would have no link with defence after they completed their assignment.

Many were from railways, audit, agriculture, animal husbandry, health and other myriad departments. I always wondered as to why these posts could not be manned by service officers of requisite experience. It would add so much to the system, and then Dr Bhamre would not have to be occupied with producing such cathartic reports. Elementary, my dear Watson, but Sherlock would have been stumped!

You think I am exaggerating? Let me quote examples.

I once led a delegation to the USA to carry out a maintenance evaluation of the 155-mm Ultra Light Howitzer (ULH). It was a multidisciplinary team consisting of representatives from Artillery (users), EME (maintainers), DGQA (quality controllers) and the MoD. A director from the MoD acquisition wing was detailed. He was a genuinely good officer with whom I had dealt with. We all landed in their artillery school in Fort Sill to evaluate the Howitzer on the mandated aspects.

In our initial meeting, we introduced ourselves to the US team. We gave out our respective backgrounds. It was then that I came to know that this director was a veterinarian and from animal husbandry background. The Americans were bursting blood vessels, but kept poker faces during the discussion. I have always since wondered as to who selected a veterinary officer to handle capital procurement cases for the Army. It is now a part of our records that a veterinarian had a hand in assessing the maintainability of the 155-mm ULH for Indian conditions. (Photo: India Today/file)

That selecting officer was a genius in the Alfred E Neuman class. If you are wondering who Alfred E Neuman is, he was the hero of MAD comics of my era. Well, that director did what he could and did it extremely well, due to his other good qualities of the heart. I always admired him for that. But I have also always blamed the system for choosing a veterinary officer for that post. No wonder our procurement is poor.

Anyway, that is history. It is now a part of our records that a veterinarian had a hand in assessing the maintainability of the 155-mm ULH for Indian conditions. The moral — even veterinarians can procure guns for India. Who needs Army officers?

The second case pertains to the time when I was sent to the USA to do an international course on defence management. It was a fantastic course about procurement. I learnt so much there that it stood me in good stead for the rest of the decade I was in service. With the education I got there, I could make a difference to my country, and I would like to think that I did, even if my sense is misplaced about its magnitude or importance.

Anyway, along with me came a director from the MoD to do this course. He was a bright and younger officer from the Indian Railways. Again, in my opinion, a very good officer. He was in an administrative post in the MoD. It was not his fault that he opted for a course in the US. There was probably no one else immediately available to do this course and he was promptly detailed.

So, an officer of the Indian Railways, in an administrative job in the MoD, did a course in defence procurement management from the USA. He never procured any equipment for the Services during his deputation at the MoD. I do hope he is doing some procurement for the Railways. After all, if veterinarians can procure guns for the Army with on-the-job training, Railway men can procure engines or whatever for the Railways after learning about arms procurement in an international environment.

I do hope the honorable Dr Bhamre has got some answers as to why our defence procurement is a mess.

Well, coming back to the present day, I understand that these 10 posts are important and are open for service officers to apply. Great. It brings me to a question. If service officers are considered fit enough to apply for posts of joint secretaries in other ministries based on their service experience, how come they are not fit to be joint secretaries in their parent ministry where their lifetime experience will be invaluable? More so their commitment and understanding?

It will contribute to greater integration of the MoD with the services, whom they are meant for. It will also promote sorely-needed joint-ness between the Army, the Navy and the Air Force. In my view, the MoD, the DRDO, the OFB and the DPSUS need to be populated with good officers from the Forces in all sections and branches. Unless charity begins at home, there is no use of big talk and reforms.

Will this be done? True reform in defence affairs will come when there is integration of the MoD in earnest. Treat this question to be coming from the quintessential common man of India, who has never been answered satisfactorily. He can only look at things in bewilderment.

This is the challenge I am throwing to the people in power — ministers, generals and secretaries. I am confident that this issue will be buried somewhere in the humungous files of the MoD. Will someone prove me wrong?