The Maharashtra Navnirman Sena (MNS) has suddenly developed a taste for due process. Recently, the youth wing of the party formally handed over a letter to the makers of Bigg Boss, apprising them that if actor Tanushree Dutta was made part of the reality TV show, MNS would bash them up, thank you very much. All the parties involved then posed for the camera, polite smiles on face and threat letter in hand.

Youth wing of Maharashtra Navnirman Sena (MNS) today handed over a letter to Bigg Boss makers at the show's Lonavala set, threatening them of violence if #TanushreeDutta enters the house pic.twitter.com/OeGoooqj0M

The MNS obviously desperately needs eyeballs. What is dismaying is how far the entertainment industry has routinely had to bend to oblige an alleged political party, that has no MLA in the state Assembly (from 13 last time), seven seats in the municipality of its headquarters Mumbai (from 28 last time), and few leaders recognised even within Maharashtra.

That Raj Thackeray continues to be taken seriously is proof that important politicians in Maharashtra are still in awe of his surname. That his party has not done well in a single election since 2009 shows that voters are far more sensible. 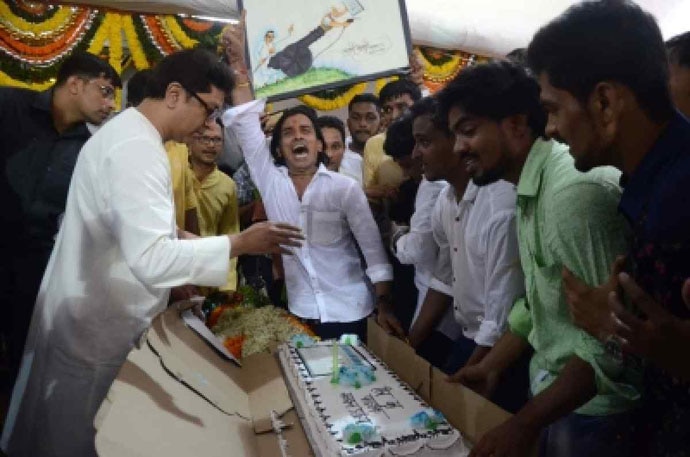 Raj Thackeray is fun. On his birthday in June, he cut a cake shaped like an EVM. It is his footsoldiers who are fearsome. (Photo: Twitter)

MNS first shot to prominence after beating up migrant workers from UP and Bihar in 2008. Since then, direct action has been its strategy of choice. So far, the party has at least pretended to back causes that resonate with people — potholes, popcorn and patriotism (which it displays by opposing Pakistani artistes).

But this time, it has publicly taken up cudgels against an actor who has accused another of sexual misconduct.

Tanushree Dutta has claimed that Nana Patekar sexually harassed her in 2008, and when she called him out, her car was attacked by MNS goons. The party has taken offence to this, and their way of proving their innocence is threatening other producers from giving work to Tanushree. 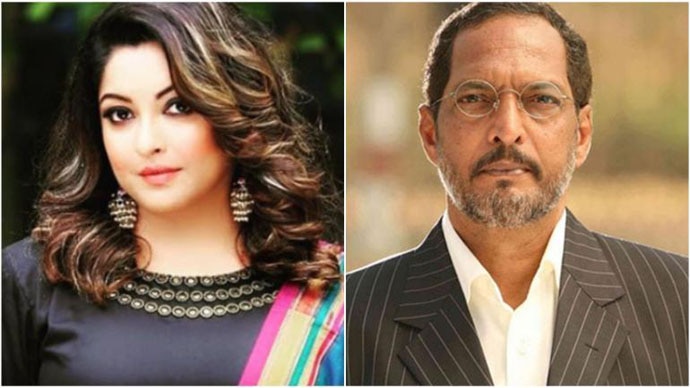 The MNS is publicly opposing a woman who has accused a powerful man of sexual harassment. (Photo: DailyO)

Rumours of Tanushree Dutta and her sister Ishita Dutta entering the Bigg Boss house had been doing the rounds before the Nana Patekar controversy erupted again.

Under what fig leaf of Marathi pride, Indian culture or national interest can the MNS defend trying to sabotage Tanushree’s career? Party members formally threatened the Bigg Boss makers of violence. Why haven’t they been put in preventive detention?

The MNS’ tactics were always questionable. Now, even its causes are.

And it derives its strength and its relevance from authorities who continue to treat it with kid gloves and oblige its unreasonable demands — MNS activists beat up people and vandalise public property frequently, but are punished rarely. When Raj Thackeray threatened to obstruct the release of Ae Dil Hai Mushkil and Raees for featuring Pakistani artistes, Maharashtra Chief Minister Devendra  Fadnavis personally brokered a peace deal between the goons and the filmmakers.

In 2009, basking in the glory of beating up migrant workers, the MNS had managed to win 13 Assembly seats in the state elections, and cost the Sena-BJP nine seats in the Lok Sabha polls. Men at work: Earlier this year, to protest potholes, the MNS dug up pavements. (Photo: PTI)

It has never since come even close to that performance, but politicians continue to see “potential” in Raj Thackeray’s last name and his personal charisma — something the other Thackeray, Shiv Sena chief Uddhav, lacks. MNS winning a few seats can potentially benefit every political camp in the state — the Congress-NCP think it can cut into the Marathi manoos-saffron vote bank of Shiv Sena-BJP. Since the Sena and BJP are not sure if they are friends or foes, both hope Thackeray will damage the other’s prospects.

However, the MNS’ steady decline is a tribute to the good sense of Maharashtra’s voters, who have realised that the party has little more to offer than witty words from its leader and ready blows from his foot-soldiers.

An India Today  investigation in 2016 had shown that MNS leaders were willing to stage violent protests for any cause if offered the right payment, and there was no ideological conviction behind its antics. With the Tanushree Dutta episode, the mask is off publicly.