India's demographic dividend is turning into a disaster

PM Modi, who is in Davos to tell the world that 'India means business', ought to bear in mind the complete failure of his Skill India programme.

At a dimly lit internet cafe in one of the several urban villages of Delhi, two Class 12 students, sporting latest hairstyles and faux designer labels, are getting their school projects printed. Sushant’s submission is on the Goods and Services Tax (GST); his friend Sumit struggles to translate his project title into English. The irritable cafe owner is in a hurry to move on to his other customers.

“Write the title in Hindi - Berojgari ki samasya (the crisis of unemployment),” Sumit tells him.

The boys study in a government school in south Delhi’s Swamy Nagar, a posh neighbourhood that houses many of the 1 per cent Indians who have come to acquire 73 per cent of the wealth generation in India in 2017. The boys on the other hand belong to the 14-18 years age group that constitute 11 per cent (100.2 million) of India’s population of 1.2 billion people. They form a huge chunk of our much-touted (and neglected) demographic dividend of 390 million millennials and the 12 million young people who join the workforce every year. 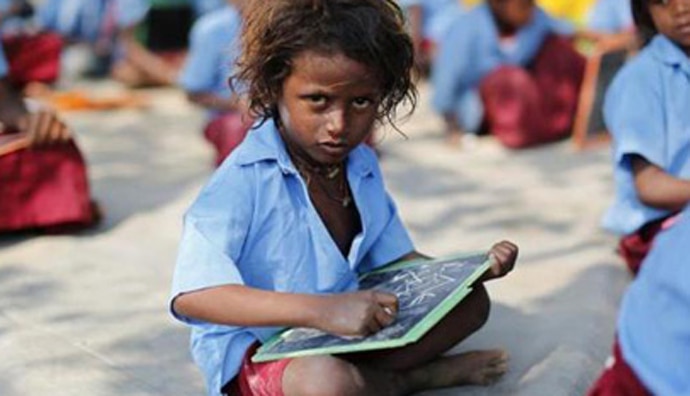 A week ago, the Annual Status of Education Report 2017 (ASER) was released by Pratham. Titled "Beyond Basics", the latest report is a welcome departure from the past as it looks at rural youth in 14-18 age group, through the lenses of - activity, ability, awareness, and aspirations. Earlier, ASER reports have brought out in stark detail the poor learning levels of children in the schooling system. It is thanks to this annual survey, we now know that while school enrolment has gone up to more than 95 per cent, learning levels of children in government schools are woeful. Most Class 3 students are unable to Class 2-level text.

The findings of "Beyond Basics" are a stinging slap to policymakers and state governments of the 24 states that formed part of the study.

The worst indictment is for the union government, which has been stubbornly resisting the extension of the Right to Education Act from 14 years to 18 years.  So far, only primary school education in India is a legal right, which is why primary school enrolments have shot up to more than 90 per cent.

Groups like the RTE Forum have been demanding that secondary school education should also be made a legal right as most children tend to "drop out" after Class 8. The latest survey confirms once again that the urgent need is to make the entire 12 years of schooling a legal right. The survey has thrown up worrisome trends that belie the media frenzy over Skill India, Digital India, Start Up India, Make in India, and Ek Bharat, Shreshta Bharat.

Consider this: Out of 100 children in Class 7 only half of them continue to study till Class 10. And only 25 per cent of them go on to complete Class 12. Less than 10 per cent of the youth surveyed in the "Beyond Basics" report were enrolled in undergraduate or other degree courses.

Nearly 30 per cent of all youth are not enrolled in either a school or any other educational course. The prime minister, who is in Davos at the World Economic Forum to tell the world’s business tycoons that "India means business" ought to bear in mind the complete failure of his government’s Skill India programme. According to the ASER report, only 5 per cent of youth are "taking some type of vocational training or other courses".

Just 5 per cent. That’s less than the proportion of such youth in Sri Lanka and Nepal, leave alone the rest of the world.

For the RSS and its supporters, the ancient golden age of "Bharat" is an ever-present model to attract ordinary Indians to their fold. "India will once again become the world’s teacher" - this promise is often heard from RSS men, BJP leaders and ministers alike. While a lie can possibly be turned into truth by repeating it ad nauseam, the same doesn’t hold true for grand promises.

Last year, the central government budget for secondary school education was slashed by 55 per cent. This month, the Central Advisory Board on Education (CABE) once again stalled the demand for the extension of the RTE Act.

Moreover, there is a shortage of 9.4 lakh teachers in government schools where the poorest children study. In Uttar Pradesh, for example, only half of all secondary school teacher posts have been filled.

In Bihar and Gujarat, one third of them are vacant.

Among the other alarming findings of the ASER report is the abysmal "awareness" level of India’s rural youth. Less than half of them were unable to locate their own state on the map.

The prime minister, especially believes in the power of apps and internet, but again, the bulk of India’s youth are deprived of access to the new knowledge-based economy.

What does this mean for new India and the demographic dividend?

If a "Beyond Basics" kind of survey is conducted among the youth who scaled the court complex in Udaipur and planted a saffron flag in the wake of the gruesome communal murder of migrant labourer Afrazul, the results are likely to be in consonance with the general findings of the actual report.

Incidentally, Udaipur was the only district where the survey was conducted in Rajasthan. The findings for Udaipur are depressing, 96.8 per cent of the youth surveyed were not enrolled in any vocational course, less than half of them could do basic arithmetic, or recognise their own state on the map of India. This pattern repeats itself across different states.

The crux of the ASER survey is clear. Most of India’s youth are uneducated, deprived of access to skills of the future, and live in abject hopelessness.

In the absence of free and compulsory education till Class 12, many of the rural youth are forced to discontinue their education over reasons ranging from death in the family to the wedding of a sibling even as education is prioritised over practically everything in middle class Indian families.

The whole family works in mission mode to ensure that their children ace their competitive exams and join a professional course, while the laggards make up by buying seats in colleges.

On the other hand, in the other India which lives in villages and small towns, the youth lives in a deep and dark well which is illuminated by TV and mobile phones. In the absence of role models (40 per cent said they have none), their lives are a dark vacuum which can be easily filled by destructive, if not exhilarating purposes.

The demographic dividend is real and inevitable, but are we as a country prepared to constructively engage the youth is the question that should be bothering our government?

Because if the government continues to look at school education as business as usual, and ignore education, skills and employability of the future Indian workforce, then the demographic dividend will surely turn into a demographic disaster.

Also read: Wisdom of slum children and how it changed me

#RTE, #Modi, #Demographic dividend, #ASER report
The views and opinions expressed in this article are those of the authors and do not necessarily reflect the official policy or position of DailyO.in or the India Today Group. The writers are solely responsible for any claims arising out of the contents of this article.