Military training for 10 lakh youths: Why Modi govt wants India to be a country of citizen soldiers

Instead of generating jobs, the BJP is planning to channelise its human and financial resources for creating militia groups.

If calling Narendra Modi a dictator-in-the-making has been the biggest cliché post-2014, the BJP government led by him has now apparently tried to prove that dictators do not always arrive with columns of troops — they could also slowly infiltrate the nooks and crannies of a nation with secret armies.

Even though the BJP government has not been around for a long time, four years seem to be enough to lay the foundation of such secret armies — the idea of which had been hiding in the dark recesses of some popular ideologies, fed on jingoism, shielded from the light of contrary opinion.

Contemporary global history has witnessed the rise of several militia movements against governments, but there haven't been too many instances when governments themselves have tried to create one. But, as they say, there is an exception to every rule.

In one such exception, the Union government is reportedly planning to create a “disciplined” and nationalist “force of youth” with a proposal to target 10 lakh young men and women every year with a military training programme. According to an exclusive report featured in The Indian Express, the project "billed as the National Youth Empowerment Scheme (N-YES) — aimed at 'optimising the Indian demographic advantage' — proposes a slew of incentives to students fresh out of classes 10 and 12 and, currently, enrolled in college."

Apart from military training, youths enrolled in the programme will also be taught "vocational and IT skills, disaster management and Indian values through yoga, ayurveda and ancient Indian philosophy".

While the proposal for the year-long programme on a fixed monthly stipend has come at a time when the government is facing severe criticism for failing to generate enough jobs, it is not difficult to see hidden designs aiming to create an entire nation of militia, indoctrinating "nationalist values" — as defined by a certain school of thought. 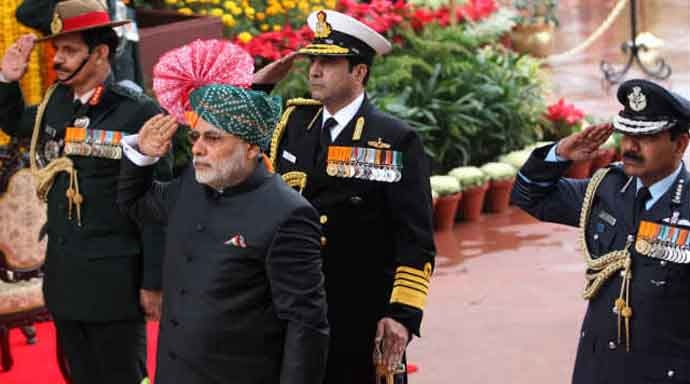 Firstly, the assumption that those without military training are not guided by a sense of nationalism is clearly based on faux patriotism, but, let's admit it, the latest scheme is also an undisguised attempt to create a "New India of PM Modi’s vision".

Instead of generating jobs, the government is apparently planning to channelise its human and financial resources for creating militias. What's more, the plan proposes to finance this scheme with a possible use of the existing budget meant for NCC and National Service Scheme (NSS), besides funds available with the skill development ministry as well as MNREGA.

Not surprisingly, reservations were said to have been raised against the proposed scheme by some officers about N-YES, during a meeting called by the PMO last month to discuss the same, and suggestions were made to strengthen the existing National Cadet Corps or NCC instead.

Many others have raised similar concerns— if there is a problem with the NCC, do we need to dismantle the same, only to be replaced by a fancier name?

Is it not possible to instead strengthen the NCC and the NSS?

Contrary to popular perception, classic form of military training to youth is a bad idea. The last thing we need is a militaristic society. Also no use of creating new programmes with fancy names. Just strengthen the NCC and NSS. Just my opinion though :)https://t.co/5aRjpEj1zw

Also, to discipline youths and inculcate 'nationalist sentiments', do we really need to create additional private armies in a country that's already fighting massive home-grown terrorism in various pockets — some, like in the Northeast and Naxal-hit areas, infamously running parallel governments?

Even though the government proposes to train an army of 10 lakh youths every year, there is no clarity if this entire brigade will be absorbed in government military jobs, considering the Indian military has a combined strength of 4,207,250 active and reserve personnel in service. Not to mention the government's plans of making the military lean and mean and the Indian Army, accordingly, ordering cadre restructuring to resize the Army.

So, in the absence of inadequate jobs in the military, where would these professionally qualified trained youths go?

The answer is: private armies forced to take up 'social management' (read vigilante groups), for instance, perhaps on the lines of anti-Romeo squads or gangs of gau rakshaks.

Civilians across the world have served as part-time replacements for military forces during war time. But India is not at war. Then why so much getting battle-ready?

India needn't look far beyond China where volunteers were introduced to guerrilla warfare, "social stability" operations and Communist propaganda. Or, for that matter, Pakistan, where armed religious fundamentalists have been wreaking havoc every day, and have been supported often by the government of the day.

The possibility of utilising an indoctrinated armed brigade, trained at government expenses (read taxpayers' money) to emulate and spread evidently right-wing propaganda is not distant. In fact, the presence of private armies with military training that have been voluntarily raising their own brand of nationalism has been a reality in India for long. The only difference is, now these will be state-sponsored. In the beginning of the year, when Mohan Bhagwat said the RSS could "prepare the society" faster than the Indian Army, it invited severe criticism. The RSS, in its defence, had claimed that the comparison was not "with the Indian Army but other civilians".

The problem with his statement was not whether the RSS insulted the Army and underestimated its capabilities or not, but the fact that a so-called cultural organisation wants the militarisation of India.

The Sangh is not just executing its plans for waging a declared war against its perceived enemy, but it is also apparently making it clear that the Indian armed forces, which operate under democratically elected governments, are not entirely adequate to secure our borders — the way the RSS wants them to.

Exactly what kind of "discipline" the Modi government wants to instil in youths in India is the question here. Do we really need private armies, under private watch, funded by the government, to legitimise the right-wing's interpretations of India? Isn't that how dictatorial regimes are designed?

There is always a design, if only people are ready to read the early signs.

#Military training, #Modi government, #National youth empowerment scheme, #N-yes
The views and opinions expressed in this article are those of the authors and do not necessarily reflect the official policy or position of DailyO.in or the India Today Group. The writers are solely responsible for any claims arising out of the contents of this article.