Howdy, Modi: What the Indian PM can achieve through Houston speech

India must use Houston as a launch pad for a robust new strategic global role grounded in clear-eyed reality.

When Indian Prime Minister Narendra Modi addresses 50,000 Indian-origin Americans in Houston on Sunday, September 22, alongside United States President Donald Trump, it’s tempting to see the event as mere optics. But behind the optics lies a careful strategy by both leaders. Trump faces a tough re-election in November 2020.

There are 3 million people of Indian origin in the US. They have traditionally voted for the Democratic Party. Texas is a Republican state but the Democrats are gaining ground. Trump, fighting a slowing economy, can’t afford to lose Texas. That would spell the end of his re-election hopes in 2020. The long-settled Indian community in Texas could provide key swing votes. 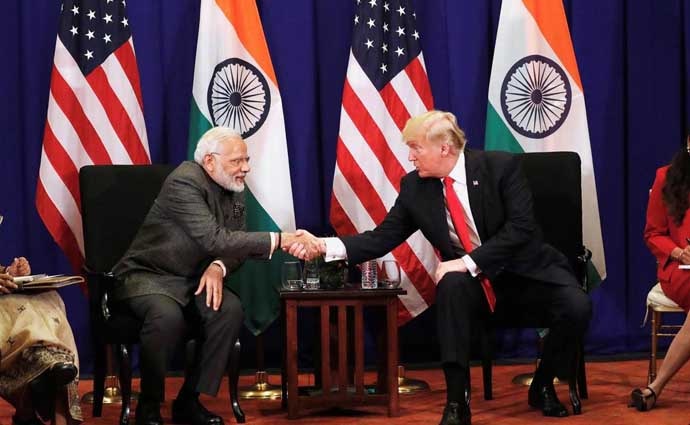 By sharing the stage with Narendra Modi in Houstan, Donald Trump is eyeing the 3 million voters of India origin in America. (Photo: Reuters)

Houston is also the centre of America’s energy sector. Global oil supplies are vulnerable to attacks in the Middle East. This was underlined by the drone strike on a key Saudi Arabian oil facility. Buoyed by shale oil fracking, the US is now the world’s largest oil producer, ahead of Russia and Saudi Arabia. With supplies from Iran being squeezed by US sanctions, Modi is likely to announce a big energy deal with the US during the Houston event. This will please Trump and narrow the trade deficit between India and the US.

For Modi, the Houston mega-show has several positives. It builds his brand ahead of Assembly elections in Maharashtra, Haryana and Jharkhand. More crucially, it neutralises the global fallout over Kashmir. Modi is scheduled to meet Trump again for a bilateral in New York before delivering his speech at the United Nations General Assembly (UNGA) later in the week.

Pakistani Prime Minister Imran Khan, in contrast, will get only a fleeting meeting with Trump on the sidelines of the UNGA. Modi is unlikely to spend much time on Pakistan in his UN speech, though he will stress the fact that Jammu and Kashmir, following the revocation of its special status, has so far been free of violence. Development and investment in J&K, denied to it for 70 years by the tourniquet of Article 370, could transform the lives of Kashmiris over the next few years.

The Houston event will be attended by over 60 US lawmakers — Senators, Congressional leaders and others. This is a geopolitical coup with a long-term impact on India’s hard and soft power. It comes at a crucial time for India. The collapse of the US-Taliban ‘peace’ talks has been greeted with quiet satisfaction in both Kabul and Delhi. India was muscled out of the multi-nation talks in Qatar and Moscow on Afghanistan’s political future.

A cementing of military ties with the US could now lead to a broader diplomatic role for India in Afghanistan. Pakistan is so deeply reviled by ordinary Afghans that its decades-long policy of controlling the country by using its terrorist proxy, the Taliban, may no longer work as well as it did in the past.

China describes its ties with Pakistan as close as “lips with teeth”. But Beijing itself has a plateful of problems. Violent protests continue in Hong Kong against China’s authoritarianism. Tibet is beginning to recapture global attention as controversy swirls over the Dalai Lama’s successor. Taiwan’s anti-Beijing Prime Minister, Tsai Ing-wen, recently signed a deal with the US for advanced weaponry worth $2.20 billion to defend the island against any forced military attempt by President Xi Jinping to reunify Taiwan and China.

All of this, along with the trade war with the US, limits the help Beijing can provide Islamabad over Kashmir. A more immediate problem for Pakistan is the Financial Action Task Force (FATF) meeting scheduled next month in Paris, which will decide whether grey-listed Pakistan should be put on the blacklist — a dubious honour it will then share with North Korea and Iran.

Khan will beseech Trump, Xi and the leaders of Turkey and Malaysia to help veto blacklisting which would impose crippling sanctions on Pakistan’s already stressed economy. Despite the likely positive fallout from the Houston event, India will continue to get negative media coverage in the West over Kashmir. To counter this, India needs effective, articulate spokespersons in foreign capitals who can deliver India’s point of view with clarity. Dealing with the global media is a 24/7 task. India has excellent retired foreign service officers who have served in Washington, London, Beijing and elsewhere.

The government, newly open to recruiting lateral talent into the bureaucracy, should implement a structured programme of assigning former ambassadors and high commissioners to address international seminars, appear on foreign television networks and give print media interviews on key issues including Kashmir.

Perception in a media-driven society is as important as policy. Good policies can run afoul of global opinion if the messaging is inadequate. Bad policies of the kind Pakistan prosecutes, meanwhile, escape critical scrutiny because of its effective, if dishonest, messaging. India has for decades punched below its geopolitical weight. In a world roiled by uncertainty across the Middle East, post-Brexit Europe and the US-China trade war, India must use Houston as a launch pad for a robust new strategic global role grounded in clear-eyed reality.

Also read: Benjamin Netanyahu’s position weakens in Israel. What this means for India

Post your comment
#Howdy modi, #Narendra Modi, #Donald Trump, #Modi in houston
The views and opinions expressed in this article are those of the authors and do not necessarily reflect the official policy or position of DailyO.in or the India Today Group. The writers are solely responsible for any claims arising out of the contents of this article.