How Modi is taking Karnataka election campaign to Nepal

Prime Minister Narendra Modi is taking BJP's Karnataka election campaign to Nepal. This isn't a new thing for him. Since 2014, he has turned every idea, platform and even his visits abroad into election campaigns.

His speech at the United Nations was an election campaign, his interactions with the NRIs abroad too is an election campaign and when he inaugurates a temple in Abu Dhabi he is eyeing on elections back home. So not surprisingly, on May 11 when he visits Nepal, he is taking his party's Karnataka election campaign along. It might be a slip but Nepali home minister Ram Bahadur Thapa has rightly described the visit as "religious and cultural and not political".

On the eve of Karnataka election, Modi will fly to Janakpur, a place said to be the birthplace of legendary goddess Sita, to offer prayers right at the beginning of his trip. People in Karnataka will cast their ballot on May 12. He is also scheduled to address a public gathering during a civil facilitation in the presence of Nepal Prime Minister KP Oli. Reports suggest that Oli is personally looking after the preparations.

Home minister Thapa has already visited Janakpur to take stock of the security measure. After Janakpur, Modi will visit other religious places, including the Muktinath Temple and the Pashupatinath Temple. The rumours in Kathmandu are rife that BJP general secretary Ram Madhav visited the capital secretly to make these arrangements.

Just imagine the way the BJP is going to use the visit to influence Karnataka voters. On May 12, the day of election, newspapers across India will carry on their front pages the news with the headlines such as: Modi accorded grand welcome in Nepal, People chant Modi Modi in Nepal, Modi offers prayers in Janaki Mandir, Modi visits Muktinath, offers prayers etc etc.

In 2014 too Modi had attempted to visit Janakpur but failed because the communists were in Opposition then. They threatened to disturb the programme and forced then Prime Minister Sushil Koirala to alter Modi's itinerary. This time neither is Koirala the PM - he passed away in 2016, nor are the communists in Opposition.

In today's communist-ruled Nepal, enlightenment is a commodity up for sale, negotiation and trade. Since the communists are in power, they don't need the idea of enlightenment, democracy and secularism to mobilise masses, as they did a few years ago. They now look more like the nineteenth century pharmacists, who offered opium for all sort illnesses. For Nepali communists, their opium is religion, coated as nationalism, and exported, as everything else, from India. 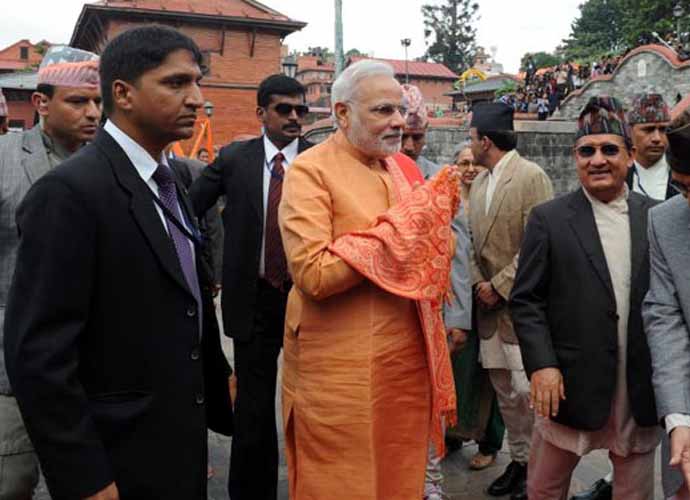 After years of struggle, peaceful as well as violent, and sacrifices of countless people, Nepal finally became a secular democracy in 2008. Now, the communists are pulling it back to its "original" Hindu fold. While the Nepali Congress is embroiled in an internal struggle, the former rebels are working overtime to transform Nepal into a "Hindu republic".

Not so long ago these comrades swore by Marx, Lenin and Mao as well as science, today they look eager to prove that they have much in common with the BJP and its parent the Rashtriya Swayamsevak Sangh.

In January, the comrades celebrated the National Unity day to commemorate the first Gurkha king of Nepal, Prithvi Narayan Shah. President Bidhya Devi Bhandari, Prime Minister Sher Bahadur Deuba and other ministers and leaders laid wreath on the statue of the "unifier" king, who for majority of the people was a cruel conqueror.

Prior to this, the communists allowed the cow to be named as the country's national animal and also remained quiet when the Gurkha flag was retained as the national flag. There wasn't a single word of protest when daura sulwar and dhaka cap, the traditional dress, was proposed as the official dress of Nepal. And now, by according Modi a welcome of a religious conqueror, the KP Oli-led Nepali government is set to give a strong push to its agenda.

For poor Nepalese of tribal region, the rule of current communist government is a reign of terror. There is news of people being arrested for cow slaughtering almost every day. The number of such cases is more than what is witnessed in India which is now ruled by the sect of people who believe in Hindi, Hindu and Hindustan. In secular Nepal, cow slaughtering is punishable crime of up to 12 years and the act is implemented very rigorously. During Monarchy too cow slaughtering was a crime nevertheless the rulers were cautious enough to not disturb the social fabric of the Nepalese society by enforcing the blanket ban on it. But, the current government is taking extra measure to destroy every traditional custom which is not in agreement with the values of the ruling elite. During the Maoist movement in Nepal, the European Union had ever advocated the negotiated solution for Nepal's conflict. Unlike other countries, the EU had a clear stand on secularism and democracy. While the Maoists favored EU's involvement in the conflict the anti Maoist forces, including the country's Army and the neighbor India, opposed its involvement in Nepal's 'internal matter'. Today in the name of 'national sovereignty' the government is targeting it. While it is ever comfortable with interference from the north and south, the EU slamming looks more like an indirect yet targeted attack on the principle of inclusion and secular democracy that the EU claims to represent.

It sounds ironic but for many in Nepal, hope for its secular future lies in delaying in the unification of the two communist parties, the UML led by KP Oli and Prachanda's Maoist Centre. There are leaders in the Maoist Centre who were involved in the violent struggle against monarchy and these leaders are strictly secular and democratic in their approach.

Tacitly, they agree to the danger of "Oli nationalism". Today they are silent due to the uncertainty surrounding their future in the united party. But once the talk of unification is put aside, they can be powerful allies in the country's fight against "Hindu" revivalism.