Modi is in Nepal, but Nepalis are unhappy with the visit

Prime Minister Narendra Modi is a divisive figure not only in India but in Nepal too. While the government of the country is making all-out efforts to amuse Modi during his two-day "religious and cultural" visit, people in Kathmandu and other parts of the country are up against him. Although Nepali media has so far refrained from reporting on the protests, the social media in Nepal is abuzz with #BlocakadewasCrimeMrModi and #Modinotwelcome trends since May 10. The protesters want PM Modi to apologise for the economic blockade of 2015-16.

Meanwhile, the protest has taken on many colours. A group of students in Kathmandu's Tribhuvan University are sitting on a 36-hour hunger strike, while others are calling for a blackout in the city by switching off the lights at 8pm, to highlight how Kathmandu looked during the blockade.

A release by the protesting students says, "After the devastating earthquake of 2015 in which more than 9,000 people died, the people were expecting help from India, instead India gave them a three-month brutal blockade. We want to make it clear to the Indian prime minister that we have not forgotten the blockade." Similarly, some political parties, including Nepal Communist Party (Revolutionary Maoist), are organising protest marches across Kathmandu against the visit.

Why people in Nepal are angry

Even though people are protesting against Modi's visit, their anger seems directed more against their own government. And this is the direct result of Nepalese PM KP Oli's anti-India rhetoric during his election campaign. In his election speeches, he had appealed to people to always remember, what he described as, India's economic blockade. He projected himself as the man who was ready to sacrifice the post by standing against the "ever intervening" India.

By organising these "colourful" protests, people in Nepal want to humiliate their own prime minister by reminding him of his statements.

For the youth of Nepal, Modi is not just the Prime Minister of India but a Hindu mascot also. While his religious posturing may go well with his supporters back home, it is a matter of concern that it is the Nepali youth who are trying to remind Modi of the country's undemocratic past.

The youth of Nepal had suffered a lot under absolute monarchy. The rule had forbidden them from modern education and livelihood opportunities in the country. For generations, youngsters in Nepal toiled in the international markets as labourers or mercenary soldiers.

Not counting the exceptions, every family in Nepal has a member or two working abroad. According to government data, around five lakh Nepali workers move abroad every year in search of work and on average, three Nepalis die every day in foreign lands. 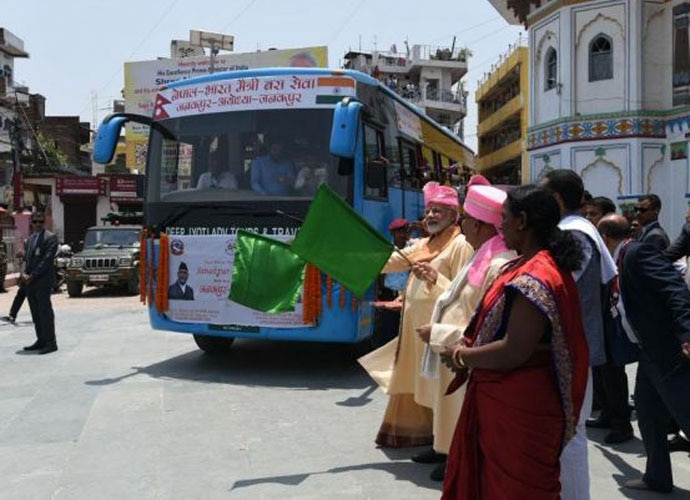 In 1996, their anger against the monarchy exploded in the form of a violent Maoist movement, which within 10 years ended the 250-year-old monarchy. Hence, Modi's religious posturing is like feeding the fed up. The fear of imposition of a Hindu identity once again on the newly secular Nepal, worries Nepali youth. While they look forward to a secular and industrialised Nepal, they see in Modi a push back to the past.

The anti-Modi sentiment in Nepal is also a result of the NDA government's failed regional policy. Modi began his term as the prime minister on a positive note. Besides inviting the SAARC heads for his swearing-in ceremony, he also visited most south Asian countries in the very first year of coming to power.

In August 2014, when Modi toured Nepal, it was the first state visit by a head of India in almost 17 years. Amid applause, he began his speech in Nepal's Constituent Assembly in Nepali. The leaders as well as people of the country beamed and thought of it as a gesture welcoming a new beginning in India-Nepal relationship.

He even advised agitating Madhesi leaders to cooperate in drafting the new constitution. This is Modi's third visit to Nepal in four years. But as his focus turned westwards, he began fumbling on the regional turf. Today, Modi government's policy paralysis is seen in every major and minor regional crisis. First, the government failed to keep south Asia united by pressuring Nepal and other SAARC countries to boycott the summit in Pakistan. During the Rohingya crisis, it failed to provide moral leadership and later created the Doklam standoff by unnecessarily intervening in Bhutan's internal matter.

Modi's current Nepal visit looks a desperate attempt to keep at least one south Asian neighbour close. But by choosing "shared religion" as a starter, he has done more harm than good. Instead of winning him friends in Nepal, it will further the divided between India and Nepal in the long run.