Pragmatism is dictating Saudi posturing as the very future of the country's economic model is at stake. It needs new partners like India.

In a sign of how dramatically India's ties with the largest nation in the Gulf have evolved in the last few years, Prime Minister Narendra Modi was in Saudi Arabia this week on his second visit in three years.

If during his first visit in 2016, King Salman conferred Saudi Arabia's highest civilian award on him, Modi's second visit saw him participate in the high-profile Future Investment Initiative Summit, dubbed 'Davos in the desert', an initiative of Saudi crown prince Mohammed bin Salman.

The crown prince had also visited India in February.

The fact that this visit happened against the backdrop of India's decision to abrogate Article 370 in Jammu and Kashmir, and Pakistan's desperate attempt to internationalise the issue, makes it even more significant. 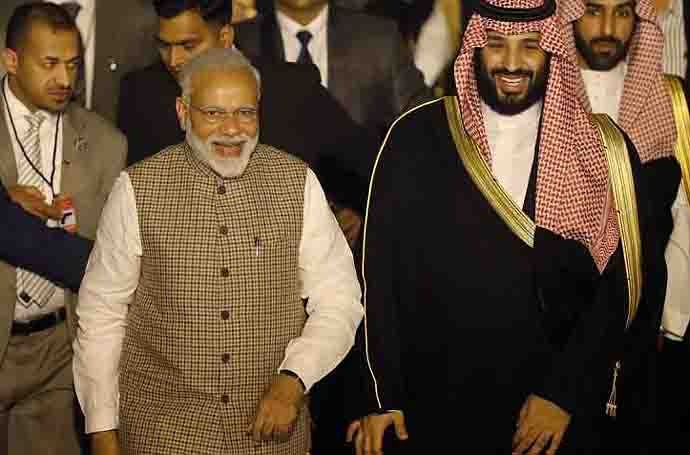 In Riyadh, Modi made a strong pitch seeking investment in India's energy sector by underlining that New Delhi will be investing around $100 billion in oil and gas infrastructure by 2024, creating additional oil refining capacity, laying new pipelines and building gas import terminals to meet energy needs of an economy that is being targeted to nearly double in five years.

He assured investors, "Due to political stability, predictable policy, and big diverse market, your investment in India will be most profitable." He highlighted the fact that New Delhi has set an investment target of $1.5 trillion for infrastructure development in the next few years, which includes oil, gas and other infrastructure such as roads, airports and ports. Modi used the example of Saudi national oil company, Aramco, which is investing in the 60-million-tonnes-a-year West Coast refinery project in Maharashtra, potentially Asia's biggest refinery.

India's trade ties with Saudi Arabia have been growing and the relationship is no longer merely a buyer-seller one, though energy remains the driver of the engagement with Saudi Arabia being India's second-biggest supplier of oil after Iraq. Saudi Arabia is now India's fourth-largest trading partner with bilateral trade at $27.48 billion in 2017-18 and Saudi investment to the tune of $100 billion is in the pipeline in areas ranging from energy, refining, petrochemicals and infrastructure to agriculture, minerals and mining.

This is a partnership which is becoming truly strategic as Modi himself underscored in his remarks in Riyadh. During Modi's visit, two important pacts were signed: The first was a preliminary agreement between Indian Strategic Petroleum Reserves Ltd and Saudi Aramco that will result in a greater Saudi role in setting up the second fuel reserve facility in Karnataka.

Meanwhile, the second pact was made between the West Asia unit of India's Indian Oil Corporation Ltd and Saudi Arabia's Al Jeri for downstream sector cooperation.

Modi also announced the formation of the India-Saudi Strategic Partnership Council that will be headed by the leaderships of both countries to "help India address its expectations and aspirations."

India is the source of the largest expatriate community in Saudi Arabia with a 2.6 million strong diaspora. Unlike in the past, New Delhi is no longer diffident about leveraging its diaspora in its bilateral engagements.

Modi pointedly referred to the "hard work and commitment" of the Indian community in Saudi Arabia in strengthening the bilateral relationship between the two nations.

He reached out to the community by underlining that India is proud of the place that "you have made for yourself in the Kingdom, and your hard work and commitment have helped to generate a lot of goodwill for the overall bilateral relationship".

India's sustained outreach to Saudi Arabia has paid rich dividends on the political front with Riyadh taking a positive approach on the Kashmir question since the Modi government's decision to revoke Article 370 on August 5.

Unlike Turkey and Malaysia, it has cautioned Pakistan against escalating the crisis. Despite Pakistan Prime Minister Imran Khan making a personal visit to Riyadh and traditionally close Saudi-Pakistan ties, Saudi Arabia has signalled that it understood Indian concerns and sensitivities on the issue.

Pragmatism is dictating Saudi posturing as the very future of the Saudi economic model is at stake. It needs new partners like India. It is not without significance that within a week of India's move, one of the biggest ever foreign investments in the country was announced by New Delhi.

Reliance Industries Ltd's decision to sell a 20 per cent stake in its oil-to-chemicals business to Saudi Aramco at an enterprise value of $75 billion made it one of the biggest Foreign Direct Investment deals in the country.

Both India and Saudi Arabia are redefining their foreign policy priorities at a time of global and regional turmoil. For New Delhi, Saudi Arabia and the Arab Gulf states are becoming key interlocutors in the Middle East.

And for Riyadh, India is one of the eight major powers with which it wants to forge strategic partnerships as part of its Vision 2030. It is not surprising, therefore, that there is a new energy in India-Saudi bilateral partnership.

Also read: Water wars more about information than water itself. India must prepare

#Davos in the desert, #Saudi Arabia, #Mohammed bin salman, #Modi in Saudi Arabia
The views and opinions expressed in this article are those of the authors and do not necessarily reflect the official policy or position of DailyO.in or the India Today Group. The writers are solely responsible for any claims arising out of the contents of this article.