BJP is a better party than Congress. You can tell by how it spins its disasters into windfalls

The BJP is a party with a difference only because of two things. First, it follows the Congress closely at its heels, doing what it has done and as it has done. Second, it justifies what it does by what the Congress has done. And does both, with ease and éclat.

But, there is a difference. That difference is that while the Congress is corrupt, the BJP is, irrespective of what it does and fails to do, infallible. Ask the BJP spokespersons, if you are not convinced.

If train accidents happened prior to 2014, they were inexcusable, as the BJP said so very loudly and convincingly. All accidents since then, and they have been too many, they are okay. “Accidents happen, you know?”

Crony capitalism, to look elsewhere, has become respectable overnight. The dynastic element in democracy is now hallowed in merit. It has become a good thing; now good politics "runs in the blood". So, we have a new category: merit-based-dynasty. So-and-so gets a ticket only because he/she is an exemplar of merit; it so happens that he/she is the son/daughter, kith and kin, of this influential politician or that. Anything wrong about it?

Foot over-bridge has become a national symbol. One, of CWG fame, crashed in 2010. The Army was called in then, as though the Army was a subsidy of the PWD. Now, the Army will build three in Mumbai, in the wake of the horrendous Elphinstone tragedy that claimed 23 lives. Who, except the Army, can have the expertise or the limbs to build FOBs?

Of course, there is no dearth of justifications, so long as spokespersons are well-maintained by political parties.

“Is not the Army too a part of India? It is after all, the Indian Army; not, the army of another country.” (Who can beat this logic?) 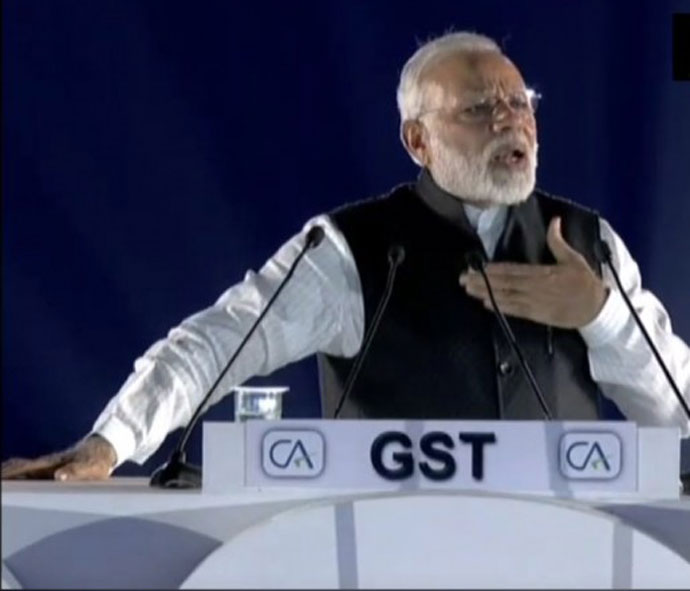 The BJP, under Modi, has the ability to turn disasters into windfalls, potential fiascos into fanfares.

Even so, I am worried; and that for a couple of common man’s reasons.

Yes, granted; it is the Indian Army. But, like in the case of surgical strikes, is it right to drag the Army closer and closer into a de facto association with a party, like in the case of the civilian administration? In democracies, governments belong to a country as a whole. Are we now building a democracy with a difference?

When the surgical strike happened, it was sold to the nation as a party feat. It seemed to most in this country as an electoral waterfall for the BJP and, perhaps, was conceived as such. In this, the BJP president himself gave the hint and, hence, the rest of India did not have to decode it like rocket science.

When OROP was implemented - the veterans say, only in part; they are still on strike - it was dressed up as a party bonanza for ex-Army men. All of us were under the impression till a few years ago that the government only had taxpayer’s money. Now it looks as though the government is spinning its own wealth out of it which is distributing mega charity here and there. All in the name of the sovereign will of the people.

Secondly, the distinctiveness of the Army from civilian life - especially its political quagmire - is vital for national interests. It is crucial for the survival of our democracy. The, trend therefore, of calling in the Army to do what essentially are civilian chores, should make all of us worry. This is not a party issue, but a mistake that bodes ill for the nation as a whole. At the far end of this myopic trend sits the Pakistan model of the army calling shots in civilian life.

Already the Army is being deified. It is impious to say anything but adulatory things about the Army. Whatever the Army says has to be accepted as pure truth. It is anti-national to distrust the versions that the Army puts out. We are, of course, not told why this has to be so.

Is it the new national dogma that the Army is a savant of truth? Are we seeing a paradigm shift in Army mores in which no propaganda - the art of lying like truth - will be used for military purposes?

The Army will tell the truth, the whole truth and nothing, but the truth? Are we to discard the old dictum, “Everything is fair in love and war?” Surely, that includes the art of dissembling as well?

No, the Army has to be valued as army, not as a sea of saints. If the art of warfare demands resorting to untruth, so be it. Why should civilians, who know nothing of what the Army does, be required to believe everything with their eyes closed, like a bevy of parrots? Should Army manoeuvres be splashed into the public space, and not confined to the LoC? And if otherwise, should citizens be robbed of their right to think freely and to form their own opinions about what is being foisted on them?

Or, are we to assume, here on, that telling the truth is anti-national? In that case, what are we to do with the national motto, “Satyameva jayate, nanarthm?”

There is yet another issue immanent in all this. I can sympathise with the compulsion to fall back on the Army to construct three FOBs in Mumbai; for that is the only way, the government admits implicitly, this can happen. It emerges then as a question of efficiency and expertise.

After all, funds for revamping the Elphinstone FOB was sanctioned in 2015. Nothing happened. Who, but the Army, can build an FOB? So, it was not for want of good intentions that the FOB was not built. It was because of rank inefficiency.

But the credit for building the three FOBs will be, post January 31, 2018, claimed by those very worthies who could not build it and caused the tragic death of so many. Doesn’t this amount to freebooting?

The FOB-issue is significant; for it separates pretence from reality, fiction from facts. A euphoric expectation was created in 2014 that India was being, finally, steered into a new world of efficiency and integrity. It was this myth that the Elphinstone tragedy exploded in a particularly shattering and compelling fashion.

I began by reflecting the general and growing scepticism that the difference between the BJP and the Congress is fictitious. But there is a difference.

That difference lies in BJP’s consummate, unmatched ability to turn words into scintillating substitutes for deeds. The BJP’s profit, and long-term loss, is the overpowering oratory of Modi. His tongue is mightier than the Army. It was Modi’s tongue that prevented the demonetisation fiasco from becoming political hara-kiri for the BJP.

It was the very same asset that turned GST mishmash into a mighty stroke of achievement.

The BJP, under Modi, has the ability to turn disasters into windfalls, potential fiascos into fanfares, utter failure into bursts of forward thrusts. But it cannot last long. It’s too good to last.

Words can substitute for action only for a while. Citizens cannot eat words or clothe themselves with the propagandist euphoria dished out to them. Life separates, sooner than assumed, fact from fiction. Words that mock deeds will fail and fall, like wings-burned moths flying over the fire of lived realities.

If a report card on the Modi dispensation is made, based on the predicament of the common man, it will not make impressive reading. Undoubtedly, life has become harder. It does not look easing up any time soon. Uncertainty looms large in our life horizon. Our loses far outweigh our gains.

The government claims to be doing mighty well for itself. We need not dispute this claim. We can take positions only according to our experiences, which is all we know. So, if the government is a gigantic gainer, and we are all losers, what are we to make of it?

Surely, this is not a claim that belongs to, or can be justified by, the democratic canon. It was only in the days of conquerors that the victors thrived at the expense of the vanquished. The wealth of the conquered people belonged to the conqueror and they were entitled to only what the new ruler was pleased to allow them to retain, as he pleased.

Surely, such an arrangement cannot be licit in democracy.

Let us return to the FOBs. What this issue proves is that national reality has not changed one bit. We may import bullet trains, but we are still far away from being able to provide a fair deal to the common man.

Bullet train is only a "magic bullet". It is meant to mesmerise the credulous. The canard that it is going to boost our "development" and catapult the country into a new level of prosperity looks less than lunatic only because of the hypnotising power of our PM’s oratory. Like all things else, bullet trains are only going to increase our burden. And the risk, perhaps, of gruesome tragedies, given how inefficient we are at maintaining passenger safety.

Will the Army be called upon to manage bullet trains too?

Also read: Demonetisation to GST - Modi is best at jumla