It didn't betray the moments of strains that characterised the previous offices of the president and the prime minister.

Narendra Modi’s elevation as prime minister in May 2014 led many to speculate about the fate of the president-prime minister relationship during the tenure of the BJP government for three significant reasons.

Since 1989, all other elections have led to minority governments, whether a single party or a coalition. Secondly, the BJP’s electoral campaign primarily remained focused upon the personality of Modi, deliberately deployed the narrative of development and categorically emphasised the idea of a strong, stable and decisive government.

On the contrary, a majority government with strong leadership at the Centre was presumed by many political commentators and public intellectuals to be a deviant that would lead to the reconfiguration of institutional matrix and become a potent cause for the strained relationship between the president and the prime minister.

Thirdly, the former occupant of the office of the President, Pranab Mukherjee — one of the tallest Congress politicians of our time — had been a seven-time parliamentarian, the chief whip of the Congress parliamentary party and held most significant portfolios during different Congress governments barring the exception of the Rajiv Gandhi government (1984-89).

Considered the Congress’ chief troubleshooter, Mukherjee was the Union minister of finance prior to taking charge as the president. A majority government being led by a strong prime minister facing a staunch congressman as the president with varied experience in politics became a reality. 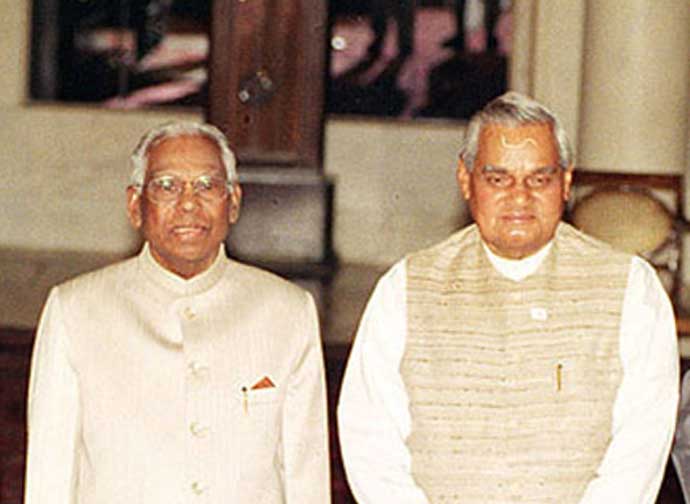 Former President KR Narayanan asked then Prime Minister Atal Bihari Vajpayee to seek confidence of the House to prove majority in 1999 as a coalition partner had pulled out from the alliance. Photo: India Today

However, now that Mukherjee’s tenure has concluded, one can argue — based on the assessment of facts and politics around the institution of presidency since the onset of coalition politics and the grounding principles and ideas that mark the working of Indian Constitution — that the present relationship between the president and the prime minister had been cordial and one of mutual respect.

Though there had been "key divergences" between the two yet in the words of Mukherjee himself, PM Modi and he "have been able to keep those divergences, if there be any, only to ourselves. It did never find any place anywhere and did not affect the relationship between the President and the PM, between the titular head and the actual head of administration and council of ministers".

Mukherjee did express his opinions on crucial issues like diversity, tolerance and demonetisation, but on all those occasions he remained mindful of the dignity of the office and on no occasion did it appear that his proclamations were intended to embarrass the government.

Modi, at the heat of election campaign for the 2015 Assembly elections in Bihar, invoked the authority of former president Mukherjee and reminded people about his words on diversity and tolerance. An act of balance could be seen as Mukherjee targeted the Opposition recently for frequent disruptions in the House and said they amounted to "gagging the majority as it is only the minority which disrupts and the chair has no option but to adjourn".

The rise of coalition politics and the formation of successive minority governments challenged the actual working of the Constitution during the '90s and beyond. It has been argued that during the 1990s and beyond, the balance decisively shifted in favour of the Supreme Court, the Election Commission and the president at the cost of the Parliament, the prime minster and the Cabinet.

The office of the president came to play a decisive role during this period with regard to the acceptance of advice forwarded by the prime minister, the dismissal of a government and the dissolution of Parliament.

The period witnessed several instances of strained relationships. Allegations were levelled against former President R Venkataraman that he intended to lead a national unity government by being elected as the prime minister amid deep political instability marking the IXth Lok Sabha (1989-1991).

Then Prime Minister PV Narasimha Rao’s biographer Vinay Sitapati notes that the relationship between Rao and then President Shankar Dayal Sharma "was so poor that Rao’s archives chronicle strained even rude letters between the two". KR Narayanan was an unequivocally assertive president who had moments of differences with both former prime ministers IK Gujral as well as Atal Bihari Vajpayee.

However, his differences with the Vajpayee government were sharper and explicit. Narayanan asked Gujral government to reconsider the recommendation for the imposition of President’s Rule in Uttar Pradesh in 1998.

The differences between Narayanan and Vajpayee over the interpretation of rules on confidence motions became apparent when Narayanan asked Vajpayee to seek confidence of the House to prove majority in 1999 as a coalition partner pulled out from the alliance.

The government fell by one vote. The differences also became public in 2000, as Narayanan expressed his doubts over the review of Constitution initiated by the government.

The next president, APJ Abdul Kalam developed strains with the Manmohan Singh government as he returned the Office of Profit Bill for reconsideration to the Cabinet. Kalam's successor Pratibha Patil’s tenure did not witness any visible strains or controversy as she and Manmohan Singh belonged to the same party and the Congress largely remained at its commanding height during her tenure.

The Modi-Mukherjee years remain an exception to the moments of strains that characterised relationship between the president and the prime minister (though occasional) since the onset of coalition politics.

Mukherjee’s pragmatism may be attributed in part to the personality factor but it also has to do with the magnitude of political majority and popularity that Modi carries. An interventionist posture on the part of Mukherjee could have developed an unfavourable perception about the working of his Office and could make it appear as prejudiced.

On the other hand, Modi had always displayed utter respect and regard for Mukherjee in view of the polarisation of Opposition and the consequent consolidation of Opposition unity that may emerge owing to the confrontation between the two offices. The laws, conventions and precedence marking the president’s action in regard to advice tendered by the government and legislation matters have enough ambiguity for a president to manoeuvre and act in an "unbound" manner, though to a limited extent.

Former President Shankar Dayal Sharma did so in 1996 when he returned two ordinances to the Cabinet for reconsideration. Mukherjee could have done the same while series of ordinances mooted by the government, including the controversial land ordinance, were presented to him for his assent.

Moreover, he gave his assent to the recommendations for the imposition of President’s Rule in Arunachal Pradesh as well as Uttarakhand. Notwithstanding the merit of case in both matters, the president’s actions on both accounts have been in keeping with the norms of the smooth relationship between both the offices. Mukherjee did express divergence but always remained deferent to the action and polices of the government.

His unequivocal praise for the Modi government at the launch of the Goods and Services Tax (GST) remains a testimony to unprecedented warmth that the two offices shared.

Also read: Iftar boycott by Modi and his ministers makes a mockery of President's office

#Modi government, #Pranab Mukherjee
The views and opinions expressed in this article are those of the authors and do not necessarily reflect the official policy or position of DailyO.in or the India Today Group. The writers are solely responsible for any claims arising out of the contents of this article.