Why is government so desperate about Aadhaar that it'll let children go hungry?

If the Supreme Court of India is anything to go by  - and it is the highest jurisprudential body in the country – the unique identity (UID), or Aadhaar, is not mandatory. At most, it’s a voluntary identification proof for a host of public services. However, the one place where routine flouting of this extremely pertinent top court order is taking place at an ever accelerated pace is the government of India.

From booking train tickets on the Indian Railways online, to accessing mid-day meal schemes, to disabled persons getting scholarships, or women rehabilitated from sexual trafficking, a host of public, or government-affiliated services would now require the Aadhaar as the mandatory proof of identity. In contravention of strict orders from the Supreme Court of India.

Moreover, the deadline for obtaining Aadhaar is woefully close, barely one to three months, and in some cases, on the same date of the announcement, February 27, 2017, such as those from the ministry of labour and employment pertaining to the National Career Services schemes.

In a country which has the highest number of malnourished children in the world, denying hungry kids the most important (and often the only) meal of the day because they do not have a particular identity card is not only shameful, it’s inhumane, and a recipe for humanitarian disaster. When a government prefers sending a hungry child back over proof of identity, it’s time to seriously doubt its intentions.

Instead of prioritising children’s health, ensuring that they get nutrition benefits, improving the quality of the meals and implementing safeguards and rules for high quality food, the government is hell bent on taking away the meagre morsel that the children could get under the mid-day meal scheme as part of free schooling under Right to Education.

Similarly, those who need skill training, guaranteed employment, help with rehabilitation after forced sexual or child labour, disaster and many other chronic problems, routinely come from the poorest backgrounds and are highly dependent of state largesse for sustenance.

Instead of bolstering the shaky public welfare system, fixing leakages and ensuring better and prompt delivery, the government is now creating hurdles to block access, going against the Supreme Court judgement.

In Jharkhand, for example, compulsory biometric authentication, Jean Dreze observes, is already denying people their basic rations. However, in Gujarat, theft of food rations is happening despite Aadhaar, and is therefore evidence how biometrics is not a fool-proof method of eliminating “de-duplication”.

Moreover, there have been way too many glitches in the system and the billion-plus Aadhaar database, with the supposed unique identity number and biometric verification of over 100 crore Indians, has been accessed, illegally of course and in breach of the Aadhaar (Targeted Delivery of Financial and Other Subsidies, Benefits and Services) Act 2016, by private companies. Reports of salesmen selling Reliance Jio SIM cards having Aadhaar data of potential customers they were trying to woo have already surfaced.

In addition, Axis Bank Limited, Suvidha Infoserve and eMudhra have been accused of performing multiple Aadhaar transactions using stored biometrics, in contravention of the Aadhaar Act. This means that private companies not only access Aadhaar database, they have it stored in their servers which they use to authenticate identities of customers illegally. 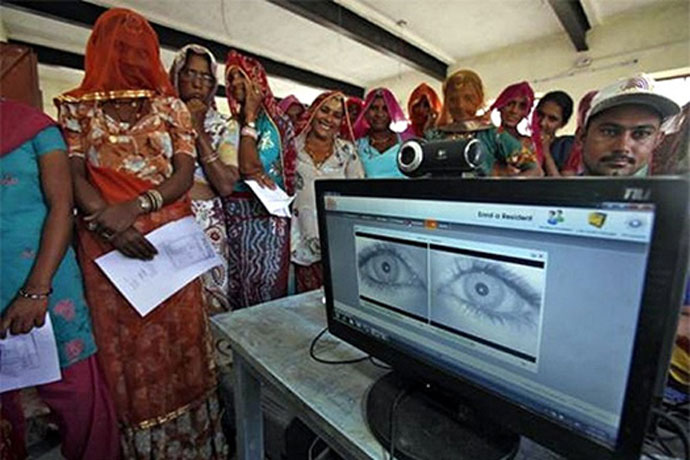 Why is Aadhaar becoming the end in itself, from its initial inception as the means to an end?

Moreover, Aadhaar has been issued to illegal immigrants, to non-existent persons, to dead persons, duplicated several times, used for religious profiling, commercially exploited by companies for selling their products.

So is the government forcing Aadhaar – a biometric identity and database with huge, huge loopholes and security/prvacy issues – on citizens by linking it with basic welfare, banking and public services? Yes. Is this illegal? Yes. Absolutely.

Why then, we must ask, is Aadhaar becoming the end in itself, from its initial inception as the means to an end? The biggest Aadhaar enthusiasts, particularly Nandan Nilekani, the former chairman of the Unique Identity Authority of India, saw Aadhaar as the portal to a technological utopia, and biometric identity as the means to have in India something like the American social security number.

However, the push towards making Aadhaar mandatory by linking it with public welfare schemes and the public distribution system, is in violation of basic human rights. As data shows, in over 99 per cent of cases, Aadhaar wasn’t the first and primary proof of identity that was given. In order to obtain Aadhaar, another redoubtable proof of identity was already required.

Therefore, the government push to make Aadhaar mandatory is less about establishing identity and more about having a staggering database that links biometric identity to almost each and every public and private facility, making surveillance and control by the government, and the private companies that can access Aadhaar, increasingly seamless.

This is exactly what the Aadhaar skeptics feared from the beginning. A unique identity-driven database of over 100 crore people that has been seamlessly linked with all the government facilities – including banking, schooling, healthcare, education, skill training, employment, as well as commercial experiences such as shopping, eating out, travel, accommodation, etc., means that each and every activity of an individual is now trackable, making the citizen extremely vulnerable to government control, and indeed government wrath.

As this report shows, the Aadhaar database is more intrusive than the US surveillance system. It was none other than Edward Snowden, the opposer-in-chief of the US-led mass surveillance, whose NSA files revealed the extent of Aadhaar intrusion. It’s almost boundless, with iris scan, finger prints, and if Arun Jaitley is to be believed, soon even the DNA details, connected to “biometric identity” of over a billion people.

Why would I need my DNA to withdraw money – my own, hard-earned money – from the bank? Wouldn’t it leave me terribly, terribly susceptible to both online frauds and government wrath, in case I voice my opinion on something that is not in keeping with the ideas that sit happily with the regime?

While the UPA government brought in Aadhaar, the NDA government, despite Narendra Modi-led BJP staunchly opposing it during the Lok Sabha election campaign, has not only made a volte-face, it is resorting to ever draconian measures to push Aadhaar down our collective throats.

Combined with domonetisation and the cashless push, the emphasis on Aadhaar as a one-stop citizen database has enormous implications when it is in the hands of a regime that is so overtly xenophobic, militaristic and vindictive.

While Aadhaar-related security breaches leave the individual wide open to commercial exploitation and identity fraud, they put the dissenting citizen at the mercy of a government which has biometric identity as the one-stop information catalogue. Can you imagine what a particularly malevolent regime would wield on individuals who criticise it, or expose fraudulence, discrimination, policy-level incompetence, corruption at the highest level?

Exactly as the government becomes ever more demanding of transparency from its citizens, it’s turning into an opaque black hole, with very little real information and too much noise, political distractions, and other means of keeping the citizenry looking away from Parliament and the ministries, as it passes more draconian legislations.

Moreover, while the civil resistance to Aadhaar is slowly building up, and while issues like right to privacy are gaining ground, the government is accelerating the pace at which it wants to complete its task of compiling the largest ever biometric database in the world.

When a government prefers sending a hungry child back over her proof of identity, it’s time to seriously doubt its intentions.

Also read: Why Aadhaar is just another burden for India's elderly

#Surveillance, #Right to Privacy, #Aadhaar
The views and opinions expressed in this article are those of the authors and do not necessarily reflect the official policy or position of DailyO.in or the India Today Group. The writers are solely responsible for any claims arising out of the contents of this article.