Australia may join the tri-lateral Malabar-2020 naval exercise scheduled between India, Japan and the US later this year, a Quadrilateral of democracies.

Prime Minister Narendra Modi and his Australian counterpart Scott Morrison bonded over ‘Scomosas’ and announced a Comprehensive Strategic Partnership in their virtual summit on June 4.

Both countries agreed to share a ‘vision of an open, free, rules-based Indo-Pacific region’ and inked a key Mutual Logistics Support Agreement which allows Indian and Australian warships to access each other’s bases on a reciprocal basis. India has signed similar agreements with the US and France allowing its warships to extend their reach through the Indian Ocean. The PLA’s muscle-flexing in Ladakh and veiled warnings to Delhi in Communist Party mouthpieces in Beijing didn’t change the trajectory of the agreement. Delhi is playing a significant role in the realignments in the Indo-Pacific. 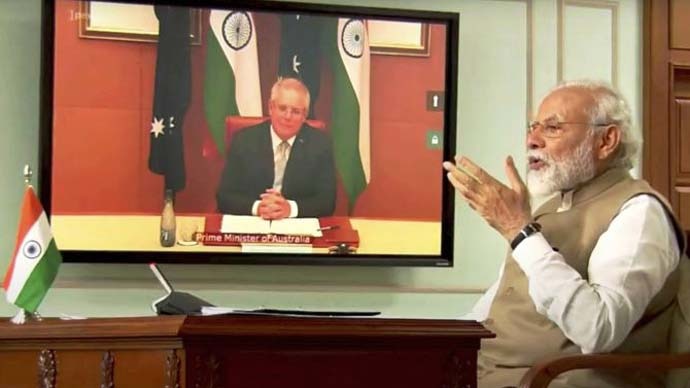 A key aspect of the MLSA agreement— still under discussions—is for Indian military aircraft to use an Australian atoll in the Indian Ocean. The Cocos (Keeling) Islands located midway between Australia and Sri Lanka is proximate to all ‘chokepoints’—narrow straits used by Chinese warships and submarines transiting to and from the South China Sea into the Indian Ocean.

The Sunda, Lombok and Ombai Straits can be covered by the Indian Navy’s fleet of long-range maritime patrol and strike (LRMP/S) P8-I Poseidons flying out of Arakonam in Tamil Nadu, but with reduced ‘time on target’. A P-8I flying from the Indian mainland would have barely an hour’s endurance on these straits, whereas it would have at least eight hours if it operated out of the Cocos. Defence officials say there may be reciprocity sought by the Australians— such as the use of the Indian Navy’s Andaman and Nicobar Islands. Both the Indian Navy and Royal Australian Air Force operate around a dozen P-8Is each. The Navy has six more P-8Is on order for India, which hopes to eventually deploy 24 of these aircraft. These LRMP/S aircraft are based on a commercial Boeing 737 airliner and so can be serviced by civil airports with a 2 km long runway. Australia may join the tri-lateral Malabar-2020 exercise scheduled between India, Japan and the US later this year, a Quadrilateral of democracies. The more belligerent Beijing becomes on the LAC, the more attractive groupings like the ‘Quad’ will become for New Delhi.