PM Modi's seaplane ride and the questions we never asked

Why do '125 crore Indians' have to wait endlessly for a service that he could be organised at the drop of a hat?

On December 11, at 10.24pm, with permission for a road show in the city of Ahmedabad denied, Prime Minister Narendra Modi tweeted his decision to undertake a seaplane ride on December 12 - the final day of campaigning in Gujarat. "With air, roads and rail connectivity, our government is making efforts for harnessing waterways. All this is for 125 crore Indians," he stated in the tweet.

Tomorrow at 9:30 AM I will travel from Sabarmati River in Ahmedabad to Dharoi Dam via sea plane. After that will offer prayers to Maa Amba at Ambaji. With air, roads & rail connectivity, our Government is making efforts for harnessing waterways. All this is for 125 crore Indians!

Where did this come from? What were these "efforts" and why did they require showcasing on this day? Well, few bothered asking.

Seeing the prime minister do what was clearly not required of him and was reportedly in violation of the VVIP travel regulations, as The Times Of India reported, was enough for many in the media and his party to make them lose all perspective as they erroneously called it "first ever seaplane ride in India" with the PM as the "first passenger".

Seaplanes are not new to India. Nearly a decade ago, Pawan Hans Limited conducted feasibility studies in various parts of the country, especially the island territories of Lakshadweep and Andaman and Nicobar Islands. In fact, from January 19, 2011 to May 2011, seaplanes connected Port Blair to the Havelock Island. Subsequently, proposals and services were initiated in Maharashtra and Kerala too. 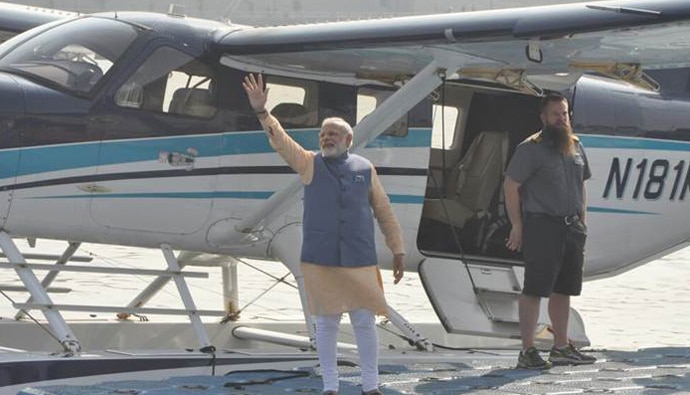 Whether "125 crore Indians", with abundance of rivers and lakes and a 7,516 km-long coastline, can benefit from light, easy-to-operate amphibian seaplanes is not even a question. So why are we still mesmerised by the sight of a seaplane? Because never-ending regulatory clearances, indifferent political and bureaucratic class and unprofitable nature of the business has ensured seaplanes remain few and far between.

The Modi government ever since it came to power, like the ones before, has shown zero interest in doing much about the matter. Contrary to what the prime minister tweeted, his Civil Aviation ministry has repeatedly stated in Parliament that the government has no proposal for commencing seaplane services in the country.

As recently as on July 20, 2017, the minister of state for civil aviation, Jayant Sinha, was asked about the "other places where the government proposes to commence such services (seaplane) in order to provide additional mode to passengers". He had replied: "There is no such proposal with the government of India."

Yes, the government has allowed 100 per cent foreign direct investment (FDI) in the seaplane operations, but has left the matter to the private sector's mercy. Are we still surprised?

The prime minister and his party can charter a seaplane and make it land at places like the Sabarmati riverfront in Ahmedabad. Can "125 crore Indians", especially those who are geographically disadvantaged and may be in need of such services since years, afford to?

On his part, Union minister for water resources and shipping, Nitin Gadkari, has promised a policy in the next three months which will work to convert the 111 national waterways into floating airports. Till that happens, wait is all we can do.

The first recorded seaplane flight took place over a century ago. In fact, after falling off the map for a few decades, seaplanes have made an impressive comeback since the 1970s. Countries like the US, Canada, France, Italy and Mexico offer plentiful avenues. Many smaller Asian countries offer seaplane rides.

If anything, the prime minister's flight should make us question - why do "125 crore Indians" have to wait endlessly for a service that he could be organised at the drop of a hat?

#Waterways, #Twitter, #Modi, #Seaplane
The views and opinions expressed in this article are those of the authors and do not necessarily reflect the official policy or position of DailyO.in or the India Today Group. The writers are solely responsible for any claims arising out of the contents of this article.