Sab pe bhari? We’ve never ever seen a bipolar fight like this ever before.

In 2009, the JD(U) and the BJP were together against the Congress and RJD combine. In 2014, the three major players chose separate ways.

But 2019 saw something phenomenal — JD(U) joining NDA to counter the Mahagathbandhan — a mash-up of various parties, which did not see eye to eye before.

This is why Bihar is probably the only state where the fight itself presented a grander optics than the results — a unique situation where Lalu Prasad's RJD agreed to shrink, leaving more room (seats) for the Congress and where the Congress let go of its ‘could’ve-been’ poster boy Kanhaiya Kumar as the RJD was not happy with him.

So, in Bihar, it’s not about the numbers — it’s about the wrestling. Together — but no, not actually. (Photo: India Today)

Left left out: Mahagathbandhan tattered from the beginning

Then, it went through a series of ups and downs. The Congress was not happy with HAM, etc.

Still, setting aside these grudges, an alliance was stitched.

But why was the Left kept standing out in the cold? It had an understanding with Lalu Prasad that, if and when an alliance is formed, the Left will be part of it. But in Lalu’s absence, things took a different turn — which brings us to the next point.

This was the first election in Bihar which missed Lalu Prasad Yadav. And the result for the clan of Lalu has been more disastrous than samosa minus alu. The maha alliance was shaking. The Yadav family was shaking too.

Tejashwai and Tej Pratap Yadav, Lalu's sons, fought and despite desperate attempts from the family to gloss over the feud, the chinks were clearly showing.

Tejashwi and Tej fell out over RJD candidates and Tej Pratap then floated a new outfit named Lalu Rabri Morcha.

The alliance gets Muslim and Yadav votes courtesy Congress-JD(U), Maha Dalits votes via HAM), Kushwahas via RLSP and Nishads via VIP.

That's complete polarisation and a test of strength based on caste. 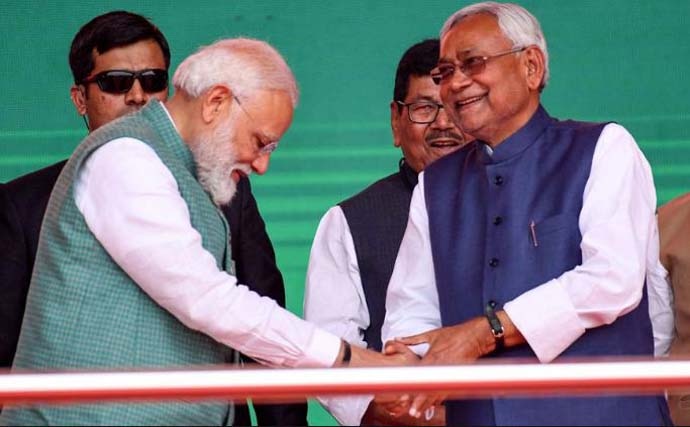 Winning Combination: An alliance which has both the PM and the CM. (Photo: India Today)

Here are the Narendra Modi voters

They see the fight as a fight between two alliances: One has a development-oriented PM and CM known for bringing prohibition to Bihar, who is also raising the issue of special status for Bihar — the other has too many squabbling partners. They prefer the first one which can get things rolling.

What this says about the Assembly election

Does this have a bearing on state politics? The state will be going to Assembly elections next year. During this election, Tejashwi reportedly said that he is Bihar’s next Lalu Prasad Yadav. The Assembly election will be a straight fight between Nitish and Tejashwi.