Thoughts in the context of the ugly stuff being thrown at the wife of Mohammad Shami for the dress she wore:

Some years ago, a progressive cop in Haryana, who himself was in an inter-caste marriage and often spoke against caste, communalism and for women's freedom, told me about attending a talk with young Dalit men and women once. The Dalit young men spoke with great indignation, he said, about how the Jats would not let them dress in modern clothes, use bikes or play loud music or move freely on the main streets and public spaces of the village or town.

He then asked those young men how, in their opinion, the young Dalit women should conduct themselves. They promptly came up with a long list of Dos and Don'ts for the women - how they should or should not dress, speak, move, behave and so on.

He then asked them - for these young women, aren't you the Jats?

I am always struck by how those oppressed in one way have little empathy for those oppressed in another way. And how across various communities, both dominant and oppressed, there is such a great shared hostility to the idea of women's autonomy and freedom. A Uniform Sexist Code, if you like.

It's fascist to tell Muslims or Christians or Dalits they can't eat beef or else they'll face abuse, threats and violence. Likewise isn't it just as oppressive to tell women they can't wear what they like or marry who they like or conduct themselves as they like?

Why is it that someone who can resent being coerced and threatened for his diet and his faith, can feel entitled to oppress women of his "own" community for how they choose to dress? 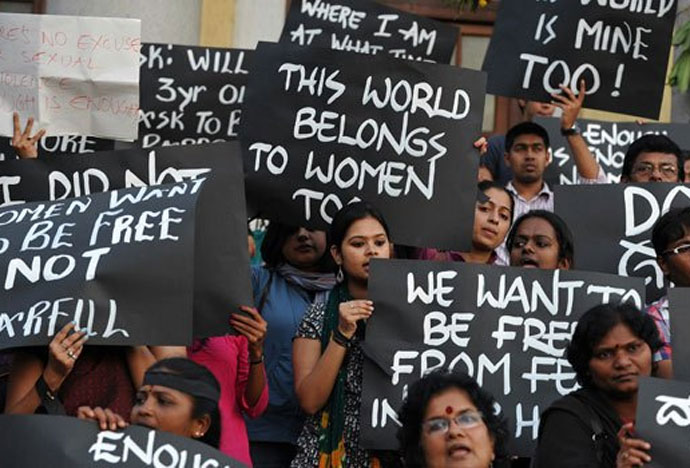 Can you look at a woman as a human being and not pay attention to how she's dressed?

As I told him gently, freedom is for the free person - the woman herself - to decide the content of. You can't "give" anyone freedom - freedom is her entitlement. And once you respect that, you have to realise it's none of your business whether she "roams naked" or not.

You aren't entitled to comment on her clothes. If you're passing moral judgement on her based on her clothes, if you brand her clothes as "nakedness" that makes you a patriarch - it's proof of YOUR lack of moral fibre and fitness that befits a comrade.

Can you look at a woman as a human being and not pay attention to how she's dressed? That's the test for you. SHE has no test to pass.

Oh and hey, Hindutva walas who are self righteously condemning those trolling and threatening Mohammad Shami and his wife, good for you. Welcome to feminism. Now I hope you'll stand up against the Bajrang Dal when it bans jeans for women. Or the Sanghi trolls who abused Kareena Kapoor for marrying Saif Ali Khan and naming their baby Taimur.

Hope you'll speak up when the RSS brands inter-faith love as "love jihad". Because the key issue here is - women's autonomy and freedom.

#Women's Rights, #Sexism, #Mohammed Shami
The views and opinions expressed in this article are those of the authors and do not necessarily reflect the official policy or position of DailyO.in or the India Today Group. The writers are solely responsible for any claims arising out of the contents of this article.