Dussehra speech: Why Mohan Bhagwat is back to raking up mandir, not vikas, ahead of 2019 general elections

It was the most awaited speech. The last one before the 2019 general elections. Rashtriya Swayamsevak Sangh (RSS) chief Mohan Bhagwat during his Dussehra speech at the organisation’s headquarters in Nagpur spelt out the agenda for the saffron outfit as India enters the big election season.

By asking the Narendra Modi government to come up with a law to pave way for the Ram Temple in Ayodhya, the RSS chief has tried to bring the issue to centre stage once again.

Just last month, during the concluding session of its three-day outreach programme, the RSS chief batted for an “inclusive” India. He was seen as a progressive sarsanghchalak trying to tow away RSS from the shadows of the hardline Bunch of Thoughts. But within weeks, Bhagwat is back to singing the same old tune. RSS thinks that construction of the Ram temple is necessary from the ‘self-esteem point of view’ and will pave the way for an atmosphere of goodwill and oneness. All the talk about a big shift in the RSS stand seems to have come to naught! The RSS clearly cannot afford to keep itself away from the temple issue any longer.

In that context, Bhagwat's speech hasn’t come as a surprise. He knows full well that the Supreme Court is likely to begin hearing on the Ayodhya disputed land title suit later this month. But Bhagwat may appear to have put the Modi government in a spot by demanding an ordinance on Ram temple.

BJP ministers have time and again said that they are ready to settle the dispute as per the Supreme Court verdict. But the hint from Bhagwat is clear. 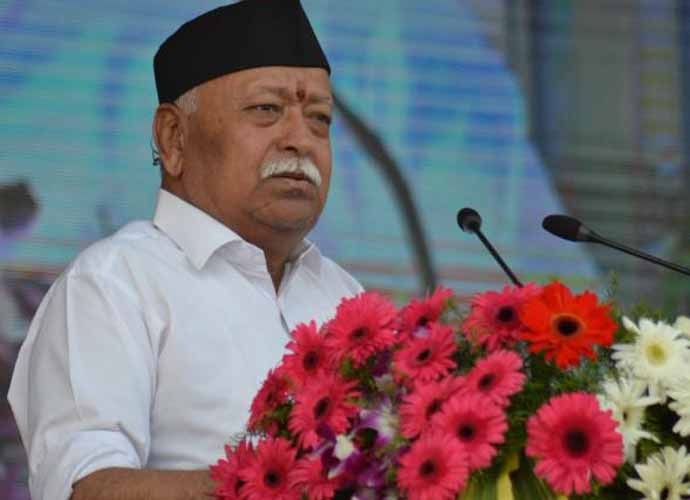 The demand for Ram temple comes at a time when the Supreme Court has already set the ball rolling to decide the title suit of the disputed land. (Source: India Today)

While leaders in RSS’ political arm – BJP — may continue to harp on Prime Minister Narendra Modi’s development agenda, the RSS has made it clear that it knows that it is Hindutva and polarisation of voters along communal lines which alone can bring them back to power.

The demand for Ram temple comes at a time when the Supreme Court has already set the ball rolling to decide the title suit of the disputed land.

Last month, the SC bench had set aside the last hurdle in way of the final hearing in the land dispute case. A three-member bench had refused to revisit a 1994 verdict stating that mosque is not integral to Islam. By all indications, the SC will begin the final hearing in the title dispute case soon. Leaders like Subramanian Swamy believe the Ram temple could become a reality before the 2019 general elections. The Sangh realises that waiting for the court verdict may not pay electoral dividends.

The crucial demand has been made by Bhagwat at a time when three BJP-ruled states are going to polls. With the BJP struggling hard to hold its fort in Rajasthan and Madhya Pradesh, it looks like the RSS chief has read the writing on the wall. The development plank will no longer work, particularly, in a state like Madhya Pradesh where the BJP has been in power for a decade and half now. The RSS and BJP know that the results of these states are likely to have a cascading effect on the upcoming general elections, where again the development plank of the Modi government will be tested by fire.

With the Congress already going hammers and tongs on BJP’s development promises in the Assembly poll campaigns, it is becoming increasingly clear that PM Modi is the prime target, ahead of any chief minister.

The fight is turning out to be an uphill task for the BJP which has to battle out anti-incumbency in the three governments as well as four-and-a-half years of the Modi rule at the Centre.

The RSS also appears to be mindful of the fact that the 2014 magic may not work in 2019 when the BJP was riding high due to the corruption charges against UPA government and Modi’s shining Gujarat image.

Bhagwat’s speech may turn out to be just the right mantra for the cadres who are finding it tough to carry the weight of undelivered promises and infuse them with fresh vigour.

With the Ram temple issue at the core of its strategy, the BJP flag-bearers will keep the saffron agenda high and flying.

The Sangh knows that despite all the temple hopping which Congress president Rahul Gandhi may undertake, it can always corner the grand old party on the temple issue.