Will either violator be punished?

Defying a directive from the Left Front government in Kerala, RSS chief Mohan Bhagwat hoisted the national flag at a government-aided school in Palakkad district.

The CPM's MP from Palakkad MB Rajesh, in a Facebook post, alleged that the national anthem was sung as an afterthought when almost everyone had left the school premises.

Quoting the flag code of 2002, politburo member of CPI(M) Brinda Karat wrote “in Section 2, Clause 2.3 vi, it says ‘flag salutation will be followed by the national anthem. Parade will be kept at attention during this part of the function’. But what happened in the Bhagwat-led function? It was not the national anthem, but Vande Mataram that was sung.”

If in place of the national anthem ie Jana Gana Mana, Vande Mataram was sung, then it is indeed a violation of the flag code. And it looks such, because so far the RSS has not disputed this fact.

This is a punishable offence.

But Palakkad is not the only place where the flag code was violated this Independence Day. About 2,424km away from Palakkad stands the world renowned Islamic seminary of Darul Uloom, Nadwatul Ulama.

It too witnessed a similar violation as the one where Bhagwat presided. After hoisting the national flag, the teachers and students at Nadwatul Ulama sang Saare Jahan Se Achha, followed by special prayers for the safety and prosperity of the country. But they did not sing the national anthem which is mandatory as per the flag code. 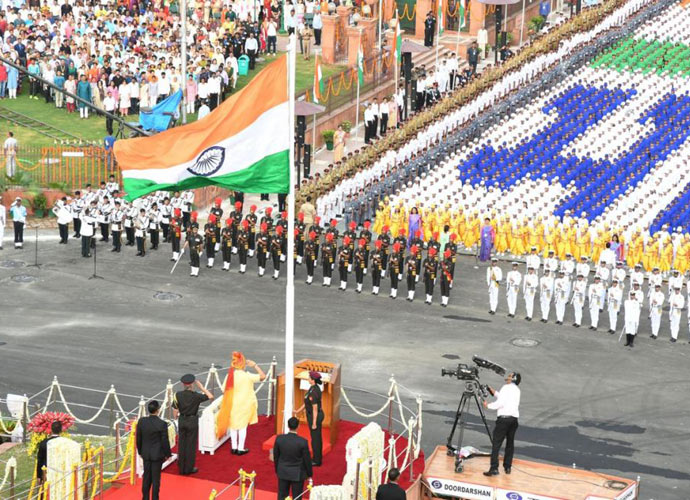 According to the flag code, salutation has to be followed by the national anthem. Photo: PIB

When questioned about it, Maulana Khalid Ghazipuri Nadwi, a senior faculty member, said: “Jana Gana Mana... includes the name ‘Sindh', which is now in Pakistan. We cannot pray for Pakistan. If the government removes the word, we will sing the anthem with pride.”

At Nadwatul Ulama, their independence day function was three-hour long, sweets were distributed, people greeted each other by saying “Azaadi ka din mubarak ho”. But there was no national anthem. This too is breach of the flag code.

While violation of the code by the RSS chief may or may not be accidental, in the case of Nadwatul Ulama it was deliberate. The difference lies in the nature of the reasoning behind the violation.

The RSS nor its chief Bhagwat offered any clarification or reasoning and yet they did not dispute the flow of events as they occurred that day. Nadwatul Ulama offered their reason for the violation... and while they may feel they have a valid reason, it just happens to not be in tune with the law of the land.

But these are mere semantics. The moot question is - will either violator be punished? Going by precedent, it looks highly unlikely.

Also read: What kind of respect should we give our national anthem?

#Flag code violation, #National Anthem, #Darul Uloom, #Mohan Bhagwat
The views and opinions expressed in this article are those of the authors and do not necessarily reflect the official policy or position of DailyO.in or the India Today Group. The writers are solely responsible for any claims arising out of the contents of this article.