Mood of the Nation poll says it could be a close call for both the NDA and the UPA, with neither getting a majority.

Narendra Modi’s stunning victory in 2014 — in which the BJP got a full majority on its own, the first time any party had done so in 25 years — changed the political landscape of the country. It held the promise of political stability and a decisive government. Many considered it a great boon for the country. However, as often happens, boons come with their own curse. In this case, it was hubris. The BJP ignored its allies.

Oldest ally Shiv Sena is in a sulk in Maharashtra. The TDP’s N Chandrababu Naidu walked out of the NDA this March, alleging unfair treatment and neglect. The Shiromani Akali Dal is upset. Their back-again ally in Bihar, the JD(U), is bristling. The NDA has remained headless since 2013 and allia­nce members have not met since 2015. All this assumes great significance now as our latest India Today-Karvy Insights Mood of the Nation (MOTN) poll shows that the BJP is going to need every one of these disgrun­tled allies and more if it has to get a simple majority in 2019.

Yet, in spite of the attrition of allies, Prime Minister Narendra Modi remains head and shou­lders above other leaders: 49 per cent of the respondents feel he is best suited to be the next prime minister. What is worrying for the BJP, however, is that our poll shows Rahul Gandhi closing in. With 27 per cent of the respondents endorsing the Congress president for the post of PM, the gap between him and Prime Minister Modi has narrowed to just 22 percentage points, from 55 percentage points in January 2017. Besides, with the opposition parties attempting to form a mahagathbandhan (grand alliance), the BJP has even greater cause for anxiety. 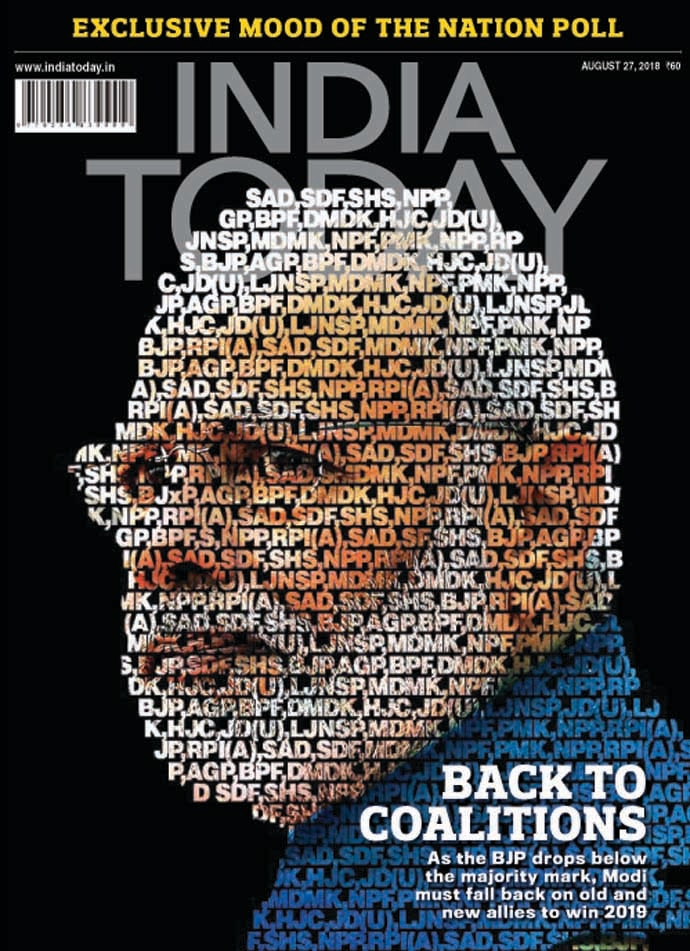 Two hypothetical MOTN scenarios, where the unity of the opposition parties is high, point to the fact that it could be a close call for both the NDA and UPA, with neither getting a majority. In which case, it will be a triumph of arithmetic over personality. The battle then will not be Modi versus the rest but NDA+ versus UPA+. There have been early signs of this, in the drama in Bengaluru after the Karnataka poll results and in the bypoll victories in Uttar Pradesh. This is why allies are going to matter most for the BJP, and it has to be prepared to manage a coalition without a majority of its own.

The NDA is working hard to ensure the people don’t get a chance to find out. It has slo­wly started adding on allies, from Telangana chief minister K. Chandrashekar Rao to YSR Congress leader Jaganmohan Reddy in Andhra Pradesh and the AIADMK in Tamil Nadu. The Naveen Patnaik-led Biju Janata Dal also helped NDA candidate Hari­vansh Narayan Singh of the JD(U) win the recent election for deputy chairperson of the Rajya Sabha. It also showed the BJP’s ability to patch up with disgruntled allies such as the Nitish Kumar-led JD(U).

Similarly, the Congress is pushing for a pre-poll alliance with strong regional parties, such as the TMC, SP and BSP. All of them have been bitter rivals in the past, but are united in their ambition to oust the Modi-led BJP government.

So the big question for the two blocks is how to maintain existing allies and find as many as they can with pre- and post-poll alliances. In all probability, we are heading once again towards an era of coalitions.

Undoubtedly, the Modi government has been on steroids, launching new schemes and revamping old ones, combined with major institutional reforms. The next elections will be a big test of the success of its major schemes. According to our poll, the BJP will be on a sticky wicket if it is going to rely only on its achievements to get votes, as the satisfaction with their performance is sliding, specially on the jobs front. The other worrying finding is that caste violence has emerged as the biggest threat to internal security, ahead of cross-border terrorism and communal violence, in our survey. Hopefully, this will be kept out of electioneering.

Psephologist-turned-politician Yogendra Yadav put it well when he said the BJP will win the next elections because of 3 Ms—Modi, Media and Machine (election). He could have added another M—Money. To counter the Ms, he advises three Ps—Principles, Policy and Political Roadmap. At the moment, the mahagathbandhan seems to lack these.

That aside, what any contender for power must offer is — hope. That’s what Modi did in 2014. Where that hope will come from, nobody knows yet. But never underestimate the wisdom of the Indian voter. Many a mighty have made that mistake.

#BJP, #Narendra Modi, #Lok Sabha election 2019, #Mood of the nation
The views and opinions expressed in this article are those of the authors and do not necessarily reflect the official policy or position of DailyO.in or the India Today Group. The writers are solely responsible for any claims arising out of the contents of this article.