Prime Minister might just be tempted, given the economic uncertainties that lie ahead, to hold elections earlier than scheduled.

Three years into his first term as India's prime minister, Narendra Modi remains the country's most popular leader by a long shot. Sixty-three per cent of the people rate him as a good and even outstanding leader.

This is no mean achievement. None of his predecessors have enjoyed this kind of support halfway through their term. Going by the India Today Mood of the Nation poll, if elections were to be held today, the BJP under Modi would on its own win 298 seats, and the NDA close to 400 seats.

The prime minister's popular ratings and indeed that of his government come in the wake of some discouraging news on the economic front. The economy is not exactly in the pink of health. The after-effects of Modi's demonetisation drive have begun to kick in, and there are fewer jobs around. According to the Centre for Monitoring the Indian Economy, 1.5 million jobs were lost in the immediate aftermath of demonetisation from January to April this year. The Economic Survey volume 2 suggests that achieving higher end of the 6.75-7.5 per cent GDP growth would be difficult.

The prime minister appears to have bucked the anti-incumbency trend. Despite the fact that a much larger number of people believe that the government has not delivered on its promise of "achhe din", his popularity ratings continue to be way above the rest.

Modi is arguably the country's best political communicator, he has the unique ability to promise more than he can deliver, yet his teflon-like image allows him to get away with it.

A case in point being his demonetisation move. He pitched it as a fight against the corrupt and a punitive strike against the rich, and despite their personal experiences to the contrary , a large majority of the people bought into it.

It speaks not just of his communication skills, but also the level of credibility that he enjoys and is able to pull off an ill-advised move like demonetisation without much of a political problem.

After the Bihar elections the prime minister has consciously sought to project a pro-poor image of himself and his government, unlike the first two years of his term, he has now cut down on his foreign trips choosing to concentrate on governance.

It is true that the opposition's inability to get its act together, its lack of cohesion and failure to come up with a counter-narrative have contributed to magnifying PM Modi's image in addition to his own achievements.

Modi and his team have really worked hard to increase his acceptability, both in geographical terms and across the class and caste divides. Programmes like the Ujjwala scheme have been launched and pursued with great fanfare, especially targetting the poor.

The Mood of the Nation poll clearly indicates that the gap between him and the rest of the opposition is widening, 2019 is clearly not done and dusted just yet.

A lot could change two years hence. The BJP literally swept the Hindi heartland, especially Uttar Pradesh, however if the SP, the BSP, the Congress and Ajit Singh's Lok Dal, succeed in coming together, the BJP may find it difficult to repeat its performance of 2014. 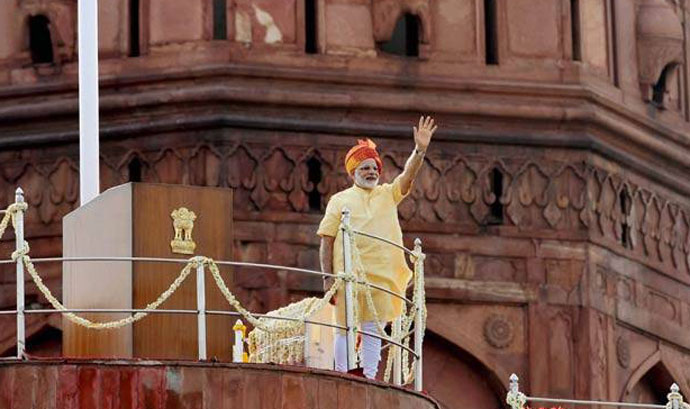 PM Modi has began to dominate the political landscape of the country much like Indira Gandhi used to in the 1970s and early '80s.

At the moment, the idea of a mahagathbandhan is way undercooked. Closer to the elections, it will need to repeat the experiment of 1989 and 2004, if it wants to entertain any hopes of preventing the Modi-led BJP juggernaut from romping home in 2019.

Despite the fact that most political commentators appear to have written off the Congress and the Gandhis, the Mood of the Nation poll shows that amongst all the opposition leaders, Rahul Gandhi at 21 per cent is the best alternative to Narendra Modi.

His mother Sonia Gandhi is second at 12 per cent and Priyanka Gandhi, though she is yet to formally join politics, comes fourth at 6 per cent. There is something to cheer for the Congress party as well.

The poll suggests that even in its weak and enfeebled state, it is the Congress party around which the "grand alliance" will have to coalesce. Significantly, 44 per cent people are of the view that a grand alliance is not possible without the Congress.

The Modi government's handling of the economy could well prove to be the game-changer. The warning signs are already visible. The number of people who feel that the Modi government has failed to deliver on the job front has registered a 17 per cent increase. In January this year, only 36 per cent people felt that way. That number has now increased to 53 per cent. Similarly, only 40 per cent feel that he has delivered on his promise of "achhe din", 23 per cent feel that he makes tall promises but does not deliver them.

The warning signals notwithstanding, Narendra Modi for the moment is way ahead of his competitors and if elections were to be held now, he would clearly romp home as the winner.

Modi has began to dominate the political landscape of the country much like Indira Gandhi used to in the 1970s and early '80s. There is a section that now belives that not only is he more powerful, but even more popular than Indira Gandhi.

The latter could also be a result of the fact that perhaps a majority of the Indians were not even born when Indira Gandhi died in 1984, while Modi with his larger-than-life persona is very much in the present.

Be that as it may, Modi is clearly riding a popularity wave at the moment. Given the economic uncertainties that lie ahead, and the possibility of a fragmented opposition finally getting its act together in the future, he might just be tempted to hold elections earlier than scheduled.

Also read: The Economist editorials on Modi government are a slap in the face of the India story

#Rahul Gandhi, #Opposition, #GDP, #BJP
The views and opinions expressed in this article are those of the authors and do not necessarily reflect the official policy or position of DailyO.in or the India Today Group. The writers are solely responsible for any claims arising out of the contents of this article.