Mood of the Nation: How PM Modi’s popularity has touched stratospheric heights

India Today Editor-in-Chief talks about the reasons behind PM Modi's soaring popularity in a crisis-ridden nation, in the August 17, 2020 edition of the India Today Magazine.

It’s hard to think of another time when post-Independence India has faced so many challenges in so short a time — a pandemic, a lockdown, millions of migrants spilling out of cities, an economic downturn and a military stand-off at the border. This is what makes the latest iteration of our biannual India Today-Karvy Insights Mood of the Nation (MOTN) survey so significant.

India never ceases to astonish and, indeed, our first MOTN after the lockdown has thrown up multiple surprises. Despite the numerous crises facing the country, Prime Minister Narendra Modi’s popularity has touched stratospheric heights. His popularity ratings — 78 per cent — are the highest they have ever been, topping his previous best — 69 per cent — in January 2017.

We began noticing this fascinating phenomenon in our last MOTN in January this year. None of his government’s perceived failings seemed to stick to Prime Minister Modi. At that point, there was anxiety over jobs and the state of the economy as well as the performance of the government, but his popularity continued to soar — at 68 per cent, it was only a marginal drop of three percentage points since the August of the previous year. This phenomenon has continued and nowhere is this delinking of popularity from performance more evident than in his government’s handling of the Covid-19 pandemic. Seventy per cent of our respondents saw it as the biggest problem facing the country and 25 per cent feel the handling of Covid-19 has been the government’s biggest failure. Yet 77 per cent rate Modi’s handling of the pandemic as good or outstanding. 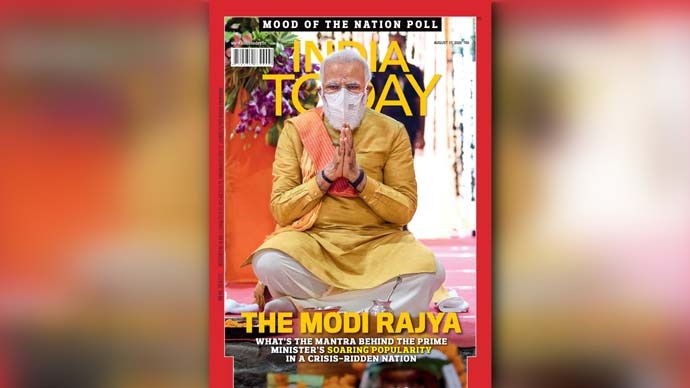 Sixty-six per cent already consider him the best choice as our next prime minister. In fact, 44 per cent of our respondents rate him the best prime minister the country has ever had. This is the highest ever rating any prime minister has received in our MOTN survey and an increase of 27 percentage points from the January 2019 edition of our poll. He is genuinely teflon-coated—nothing negative sticks to him. So while his demonetisation move in 2016 may have caused widespread suffering, it did not prevent the BJP from winning the Uttar Pradesh assembly election handsomely four months later. His oratory and charisma are unmatched in their popular appeal. On top of that, his popularity is sustained by his effectively projected image as a man of the people who works with great sincerity to improve the lot of the common man. The survey indicates that his pro-poor and pro-rural push has had a considerable impact. In the present political landscape, the TIMO (There is Modi Only) factor is at work in full force as the Opposition remains scattered.

Sixteen per cent of our respondents see the revocation of Article 370 as the single most significant achievement of his government, a slight dip of four percentage points from January 2020. However, there is a rise of four percentage points — from nine per cent in January 2020 to 13 per cent — in the number of respondents who see the Supreme Court’s verdict on the Ram temple in Ayodhya as his government’s single biggest achievement.

The disarray in the Opposition continues. The UPA has seen a dip in popularity—to a projected 93 seats and 27 per cent vote share, down from 108 seats and 29 per cent vote share in January 2020. The Congress tally has slipped to 49 seats from 60 seats over the previous MOTN, and its vote share has dropped by one percentage point to 19 per cent. Forty-seven per cent of the respondents think the party is heading towards its demise. Yet, 44 per cent rate the Congress’s role as an opposition party as good or outstanding. Rahul Gandhi, surprisingly, is still seen as the best bet to revive the Congress for 23 per cent of the respondents.

The government’s measures to impose economic penalties on China for the border situation have met with an overwhelming response from MOTN respondents. A staggering 90 per cent favour boycotting Chinese products, 67 per cent are ready to pay more for goods not made in China and 91 per cent believe that banning Chinese apps and denying contracts to Chinese companies is the right approach to counter Chinese aggression. Nearly two-thirds, or 69 per cent, of respondents feel the Modi government has given a befitting response to China.

However, the euphoria and the ringing endorsement for Prime Minister Modi should not lull the government into complacency. There are warning signs too. Ratings for the NDA government’s economic performance have fallen to 43 per cent from 60 per cent in August 2019. Thirty-three per cent also feel that government policies have helped only big business while 63 per cent say they have suffered a loss of income. What is significant is that Modi is losing the perception of having achieved corruption-free governance — only 9 per cent see it as an achievement of his government — a fall of eight percentage points from six months ago. Meanwhile, the country is bedevilled with some severe problems. There is the contracting economy, a national health crisis and a confrontation at the border. None of them are unlikely to go away soon. The nation, according to the survey, obviously trusts Prime Minister Modi in this time of crisis, but the tasks before him are enormous. If he is unable to deal with these issues successfully, the adulation could turn into detraction. That won’t be good for the country or for him.

#Revocation of article 370, #India today magazine, #There is modi only factor, #Prime Minister Narendra Modi
The views and opinions expressed in this article are those of the authors and do not necessarily reflect the official policy or position of DailyO.in or the India Today Group. The writers are solely responsible for any claims arising out of the contents of this article.