The small bespectacled boy accompanying visiting Prime Minister Benjamin Netanyahu might as well be mistaken for an Israeli Harry Potter, orphaned as he was in the blood-curdling terrorist attacks on Mumbai, on November 26, 2008. The city’s first Chabad House, where little Moshe Holtzberg stayed when he was only two years old, and where he was born, came under heavy firing from gunmen belonging to Lashkar-e-Taiba, and bullets felled his parents, the Israeli-American Orthodox rabbi father, Gavriel Noach Holtzberg, and mother, Rivkah. Sandra Samuel, Moshe’s Indian nanny, rescued him, clutching the baby she found crying next to his parents’ lifeless bodies, and running outside Chabad House to safety, guided by Indian forces.

“Baby Moshe” became some kind of a little folk hero, and the leitmotif of Israel’s “common scar” with India. In the story of the little orphaned boy, reverberations of India-Israel ties were discovered, reaffirmed with sombre solemnity in the two countries, with memorials erected to the victims of the attack. While he has lived with his maternal grandparents, Shimon and Yehudit Rosenberg, along with Sandra Samuel, the nanny who was granted Israeli citizenship in 2010, he has, in the past, expressed the desire to be a “normal kid”, that he didn’t want anyone’s “pity”. 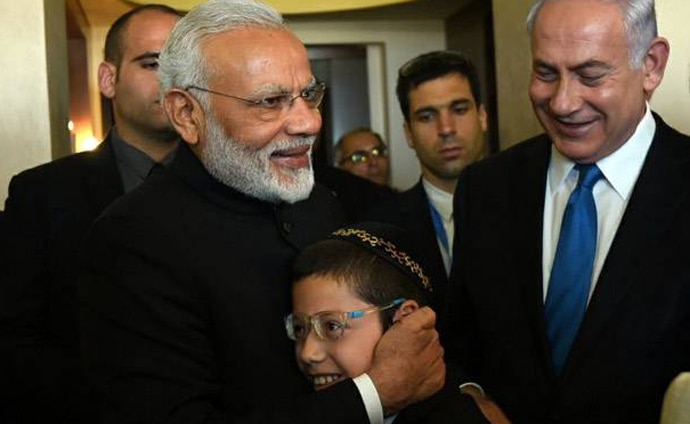 But does that normalcy include being transformed into a living museum of a national trauma? As he “returned” to the site of massacre that took away his parents and branded him as the “sole survivor” at Nariman House nine years ago, his insertion into the present-day politics of India-Israel relationship is a testimony to the manner in which history often becomes a tool for collective voyeurism, as personal pain and suffering is sealed off from larger political currents, and one person’s sorrow is prioritised, rebranded as integral part of official narrative, over and above the sorrows and sufferings of others.

Moshe Holtzberg has been brought to India by his grandparents and Sandra Samuel, as part of Prime Minister Netanyahu’s retinue of "good Israelis" - invested in Israeli nationalism in a real or symbolic way. Moshe has said the words “Shalom! Bahut khushi” to elated Indian newsgatherers, and the video of his holding a memorial placard in Mumbai, flanked by the two prime ministers, Netanyahu and Narendra Modi, on either side, has been shared many a time by emotional Indians and Israelis alike.

#WATCH 'PM Modi invited me to India and you will come with me', PM Netanyahu to Moshe #IndiaIsraelfriendship pic.twitter.com/r9jRvP4eAy

Mumbai: Moshe Holtzberg visits Nariman House, where his parents lost their lives in the 26/11 attack. His grandparents also present. pic.twitter.com/ja1dsPtB2p

While his grandfather says “Mumbai is much safer now”, Moshe smiles beatifically to beaming television cameras, acutely aware of his centrality in the narrative of neonationalism forged by India and Israel. While the psychologists Moshe visited back home had said all his memories were stored in a “black box” of sort, which should be carefully handled by those around him, can the instrumentalisation of childhood trauma for political ends really help Moshe overcome his pain?

Isn’t he too young to make an informed decision about how to handle that suffering, something he’s too young to remember, but something he must have internalised via how the episode has been recounted to him, by his family members, as well as the high-level political exposure he has unfortunately had at an early age?

It’s true that it’s impossible (and thoroughly unfair) to clinically segregate Moshe Holtzberg’s personal from the tumultuous politics of India and Israel. Yet, the sight of Moshe being paraded as a signboard of Israel’s wound in Indian soil, and thereby the identification of the common enemy - the Muslim terrorist - is terrifying and saddening, to say the least, though it’s not unexpected. While Moshe finds enthusiastic applauds among Indians eager to see India, under Narendra Modi, weld ties with Israel, under Benjamin Netanyahu, that are unabashedly militarist and defence-oriented, is there anyone worried that the young impressionable mind might be developing a twisted idea of what constitutes nation, nationalism, suffering and terrorism?

British-Israeli academic Yosefa Loshitzky has called the use of traumatic collective memory, especially the Holocaust in Israeli and American cinema, particularly, in Steven Spielberg’s Schindler’s List, as an instance of “historical voyeurism”, as a method to turn it into a mummified version of unspeakable pain, re-enacted, but not critically re-investigated with reference to Israel’s present-day politics. How does Israel justify the continued occupation of Palestinian territories through the barrel of a gun, especially those annexed during and after the six-day war of 1967, and treat the Palestinians in a manner that is sometimes reminiscent of the Nazis’ treatment of the Jews?

While the origin of Israel is in itself embedded in the great human-made catastrophe that was the Third Reich, Israel’s response has been less than human itself, treating its Arab ethnic minorities with contempt and brutality, taunting them over their political commitment to the cause of Palestine, for their nationalism without a nation, meeting the obvious resistance to occupation through mammoth military might, not even sparing the children.

For example, the left-liberal Israeli newspaper Haaretz has called religious Zionists of Israel “more dangerous than the Hezbollah”, of course to unanimous political condemnation from Tel Aviv’s political corridors. While Haaretz has fiercely and conscientiously opposed the occupation of the West Bank by Israel, to the strategy of colonising the territories by officially settling Israeli Jews there in more and more numbers, running a wall in between separating the Arabs from the Jews, depriving the ethnic minorities of water, access to facilities, basic human dignity, the successive governments of Israel have created many a little Moshe in the occupied territories of Palestine.

The starkest example of this is the tale of 16-year-old Ahed Tamimi, arrested and subjected to a military trial for slapping a member of the Israeli Defence Force (because they shot her cousin from point-blank range with a rubber-coated bullet, shattering his face, putting him in a coma), and spreading the cause of Palestinian nationalism. While Ahed has been compared to the American civil rights leader Rosa Parks, who too courted arrest, her fierce innocence and open defiance of the Israeli military has turned her into a heroine of the resistance, while making her one more child prisoner of Israel, among hundreds of others, often orphaned Arab children.

An Israeli military court extended the detention of Palestinian teen Ahed Tamimi yesterday. Her father Bassem called out to her: "My dear, my daughter. How are you? Be strong. You’re strong.”#FreeAhedTamimi https://t.co/j8w9S0jOdD pic.twitter.com/CmMU3pLugg

In 2016, @AbbyMartin asked Ahed Tamimi what it's like to be a child living under brutal occupation.#FreeAhedTamimi pic.twitter.com/gTCjsokYxr

Tamimi’s “simple and profound act of defiance against the occupation” has made Israel’s military court pronounce her a terrorist. Her life, barely five years older that she is than Moshe Holtzberg, remains utterly destroyed by the Israeli occupation, but her courage is a source of hope to many. But Tamimi’s experience of Israel’s militarist expansionism as nationalism is starkly different from the account that has been drilled into Moshe Holtzberg, who’s being made into a living museum of a recent historical trauma, but who’s not encouraged to reflect upon, indeed carefully sutured from, these concurrent politicised childhoods in and around Israel.

The discrimination of Arabs in Israel isn’t only a matter of the Palestinian cause, but also the increasingly shrinking space for their civic and sociopolitical life in the Jewish majority state. While PM Narendra Modi in his “historic” July 2017 visit to Israel, the first of its kind by an Indian leader, made a point to meet Moshe, he skipped Ramallah and became a subject of criticism from left-liberal commentators and political watchers of West Asia. And while India went against the US-driven agenda of recognising Jerusalem as the Israeli capital at the Unites Nations vote, both the prime ministers have brushed this aside as a forgettable hiccup in the forward-marching relationship of India and Israel.

However, this isn’t a case of mere foreign policy balancing act, since the plight of Arab minority in Israel, almost 20 per cent of the population - mirror in many ways the persecution of Muslims in India. Whether it’s the constant sociopolitical harassment by the Hindutva leaders affiliated to the ruling BJP or its ideological parent, the RSS, or the witch-hunt and daily trials in the kangaroo courts of hysterical and jingoist news-channels, some of them owned by members of the NDA, or through actual criminalisation of eating habits, decrepit and invalidated separation norms, or sometimes, just by practising their faith, using the Urdu language, making a remotely political assertion questioning the conflation of nationalism with a Hindu, militarist nationalism - the indignities and assaults on liberties are way too many to recount at length, normalised with a brute frequency unheard of in modern Indian history.

Just like in Israel, even in India, the common citizenship hasn’t prevented the Muslim minorities from being subjected to “institutional and governmental discrimination in education, work, economy, residency and politics”. However, that discrimination in India has intensified in the last three years under the Modi regime, which has seen daylight murders of Muslims over beef, cattle trade, love jihad, among other intentionally divisive narratives of communal apartheid. Young boys like Junaid Khan are stabbed to death on a train in India, just like children are shot for slightest show of aggression by the Israeli soldiers, and Kashmiri kids are blinded by pellet guns by Indian forces in the Valley, making the celebration of Moshe Holtzberg an incomplete story.

Young Moshe has suffered far more than many children, but his story has more resonance with those little humans whose lives have been torn apart by regimes of division, occupation, displacement and disenfranchisement. Unless he learns to, or is allowed to, commiserate and commemorate with those leftover children of politics, whether Israeli, Palestinian, Kashmiri and other Indians, he would remain a flesh and blood monument to an intentionally partial, sanitised narrative, without any real closure.

And that would be a terrible injustice to him.