The great theft of India by imperial Britain — Part 1

Why then is there such little anger against the British while the Muslim rule is (rightly) reviled?

They came, they saw, they conquered — and they left with a fortune.

The story of how 190 years of British colonial occupation, from 1757 to 1947, impoverished India is one of the great untold stories of modern history.

Congress member of Parliament and former junior external affairs minister Shashi Tharoor tried valiantly to tell the story in his 2017 book, The Inglorious Empire: What the British Did to India, but gaps remain. What, for example, was the quantum in inflation-adjusted wealth siphoned out of India by the colonial British? What was the modus operandi colonial officials employed? Should India seek reparations — and how might these be credibly computed?

What was the quantum in inflation-adjusted wealth siphoned out of India by the colonial British? (Photo: Reuters)

Some of these questions have now been answered by the economist Professor Utsa Patnaik. She recently published a collection of essays in Columbia University Press detailing the method of the two-century-long British theft, its computation at today’s currency value, and a possible mode of reparations.

Crucially, Professor Patnaik does what Tharoor in his otherwise fine book (Indian edition: An Era of Darkness: The British Empire in India) does not: she puts a figure on the British theft.

In an interview with the business daily Mint on November 19, 2018, Professor Patnaik said: “Between 1765 and 1938, the drain amounted to £9.2 trillion, taking India’s export surplus earnings as the measure and compounding it at a 5 per cent rate of interest. Indians were never credited with their own gold and forex earnings. Instead, the local producers here were ‘paid’ the rupee equivalent out of the budget – something you’d never find in any independent country.” When Robert Clive defeated the Nawab of Bengal, Siraj ud-Daulah, in 1757 in the battle of Palashee (Plassey) by bribing the Nawab’s army commander, the traitorous Mir Jaffer, the real prize for the British was the right to collect tax from Bengali peasants, traders and farmers.

The Nawab had levied a modest tax, allowing peasants a reasonable living. By 1765, within eight years of Clive’s victory over the Nawab, all that changed. Taxes in Bengal were trebled.

Unable to eke out a living, 10 million people out of Bengali’s population of 30 million died of starvation in 1770.

Around 173 years later, in 1943, as the Second World War raged and the British Empire was on its last legs, Prime Minister Winston Churchill would withhold vital food grains from Bengal, leading to the Great Bengal Famine in which over three million people died.

But back in 1770, the British were focused on making money. Britain was still a relatively poor country. The industrial revolution was some years away. The British were focused on making money. (Photo: Wikipedia)

The British were especially active in the African slave trade. Through much of the 1700s, Liverpool monopolised 55 per cent of the brutal Atlantic slave traffic. The United States was still a British colony. African slaves captured or bought by the British in Sierra Leone, Ghana and the Ivory Coast were shipped in British vessels to America, their arms and legs chained in manacles, lying one above the other. Dozens died during the horrific transatlantic journey.

Back in Colonial India

As Britain began to extort tax revenue from Indian peasants, the industrial revolution received a boost in terms of funds and raw materials from India. The British modus operandi was as simple as it was extortionate: it taxed Indian peasants 35 per cent of their income, three times what the Nawab of Bengal had taxed them. That excess tax revenue was then used by the British to buy Indian goods – spices, textiles and gold – which were in great demand in Europe and North America.

This system continued unimpeded virtually throughout the colonial period. In order to ensure that peasants, from whom they extorted steep taxes to buy Indian goods for export, did not realise how they were being cheated, a ruse was employed. The British tax collectors and British buyers of exportable goods were deliberately kept as completely separate entities so that no connection could be made by peasants whose taxes were being used to drain the country’s resources. Professor Patnaik explains the scheme: “A large part of the producer’s own tax payment simply got converted into export goods, so the East India Company got these goods completely free. The later mechanism, after the British Crown took over (in 1858), used bills of exchange. The only Indian beneficiaries of this clever, unfair system of linking trade with taxes were the intermediaries or dalals. Some of modern India’s well-known business houses made their early profits doing dalali for the British.”

Were the British thus more rapacious than the Mughals? Unquestionably. They impoverished India in a way the Mughals did not. That does not absolve the Mughal Empire. It was savage, destroyed thousands of temples, and converted lakhs of Hindus through the sword or through financial inducement. The Mughals were a destructive, malignant force. 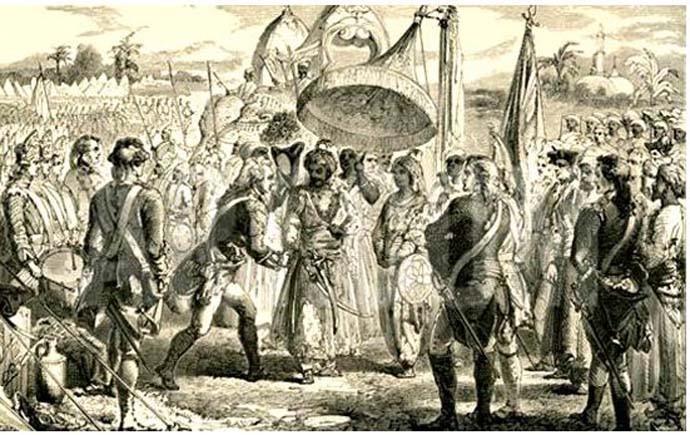 Many Hindus in the 1700s were fed up of the debauched Mughal Empire. (Photo: Wikipedia)

The British though exceeded them in the damage they did to India’s economy. Why then is there such little anger against the British while Muslim rule is (rightly) reviled?

The reason is complex. Many Hindus in the 1700s were fed up of the debauched Mughal Empire. They were relieved when the British defeated the Mughals. They regarded the British, who brought new technology and avoided religious conversions, as the lesser evil. There are miniscule Protestant converts in India compared to millions of Muslim converts. In a deeply religious country, that mattered.

Between two evils, there is little to choose but let Professor Patnaik have the last word: “Per capita annual foodgrains absorption in British India declined from 210 kg, during the period 1904-09, to 157 kg during 1937-41, and to only 137 kg by 1946. If even a part of its enormous foreign earnings had been credited to it and not entirely siphoned off, India could have imported modern technology to build up an industrial structure as Japan was doing. Instead the masses suffered severe nutritional decline and independent India inherited a festering problem of unemployment and poverty.”

In part 2: Colonial reparations. How much? And the modus

#East India Company, #India, #Mughals, #British Raj
The views and opinions expressed in this article are those of the authors and do not necessarily reflect the official policy or position of DailyO.in or the India Today Group. The writers are solely responsible for any claims arising out of the contents of this article.