What is Mukhtar Ansari's role in UP politics?

Mukhtar Ansari will not contest the UP 2022 assembly election for the first time in two decades. Know who is Mukhtar Ansari, and his role in UP's politics ?

For the first time in 25 years, BSP MLA Mukhtar Ansari, the dreaded gangster of Purvanchal region of Uttar Pradesh, will not contest the elections. Ansari has instead made way for his son Afzal Ansari, 29, from the Mau seat. Mukhtar has held the seat five times straight since he won it in 1996 from a BSP ticket.

Mukhtar Ansari was to contest the 2022 elections from the Mau Sadar seat ever since his nomination filing was cleared by the MP/MLA court. He was offered the seat by Om Prakash Rajbhar’s Suheldev Bhartiya Samaj Party (SBSP). But being an ally of Samajwadi Party (SP) in 2022 UP Assembly Elections, the party had to retract its steps.

Sources who spoke to Indian Express said that though Om Prakash Rajbhar wanted Mukhtar to contest from the Mau seat, SP supremo Akhilesh Yadav wasn’t convinced. Yadav knew the Bharatiya Janata Party (BJP) would use this against SP in its campaign. The BJP has time and again accused SP of being sympathisers of criminals. Hence, Mukhtar was not fielded by the SBSP from Mau. 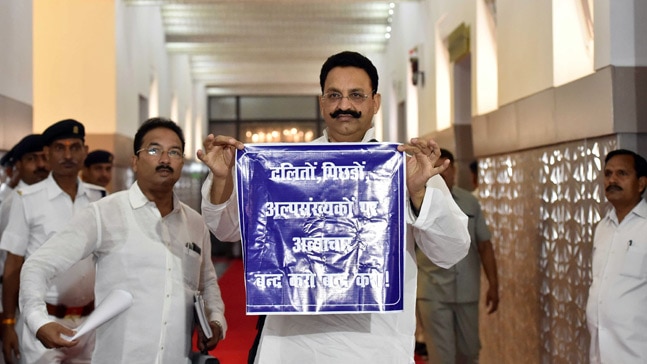 But this is not the first time Akhilesh has expressed his coldness with Mukhtar. In 2016 too, he chided his uncle Shivpal Singh Yadav for trying to induct the Mukhtar family into the SP.

Mukhtar was once called the Robin Hood of Purvanchal by Bahujan Samaj Party (BSP) supremo Mayawati. The gangster-turned-politician has an impressive clout in the Varanasi-Mau-Ghazipur-Jaunpur region. From financing marriages to even lifting grooms by force, Mukhtar was known for his notorious as well as philanthrophic work.

But Mukhtar, apart from being a gangster MLA, is a name abuzz in the BJP circle too. Ever since BJP took over UP, Mukhtar has been stressing on a threat to his life.

Exactly what is Mukhtar Ansari's role in UP politics?

THE RISE OF MUKHTAR

Mukhtar is the grandson of Mukhtar Ahmed Ansari who was the President of Indian National Congress in its early years. His maternal grandfather was Brigadier Mohammad Usman. Mukhtar also happens to be a distant nephew of India’s former Vice-President Hamid Ansari.

But unlike his elders, Mukhtar made his name in the world of crime. His journey started in the 1970s when he was a member of the Makhanu Singh Gang. In 1980s, he had a fallout with Brijesh Singh, a member of a rival gang. The two collided over contracts worth Rs 100 crore, which were started by government back in 1980s.

By the 1990s, Mukhtar was famous in the region for his criminal activities.

RIVALRY OF MUKHTAR AND KRISHNANAND RAI Mukhtar went after Brijesh Singh ever since he became an MLA in 1996. He used his political dominance to have an upper hand in the region's contract busines. But in 2002, Krishnanand Rai, another BJP MLA, won the Mohammadabad seat and Brijesh joined him to combat Mukhtar.

Krishnanand Rai aided Brijesh Singh’s endeavours in resisting Mukhtar Ansari’s rising graph in the Purvanchal region. Mukhtar alleged that Brijesh and Rai wanted to eliminate him. In 2002, Mukhtar’s convoy was ambushed by Brijesh Singh. Three of Mukhtar’s men died while some from Brijesh Singh's gang also died. Brijesh Singh was presumed dead as he was critically injured. He had escaped. Mukhtar was furious.

In 2004, UP State Task Force had warned that Mukhtar’s men were purchasing light machine guns from international dealers. But no action was taken.

In November 2005, Krishnanand Rai along with six other people, were killed in broad daylight allegedly by Mukhtar Ansari’s men. When the post-mortem was done, the doctors retrieved 67 bullets from seven bodies. This was said to be a message sent from Mukhtar. Krishnanand Rai's brother Ram Narayan Rai, who was in another vehicle, survived the attack. He later said that the attackers while firing yelled, “Maaro inhe, Bhai ko pareshan kar rakha hai.” This was a reference to Mukhtar.

It was said that Mukhtar Ansari and Afzal Ansari used gangster Munna Bajrangi’s gang to eliminate Rai. Along with him was Rakesh Pandey, another member of Mukhtar’s gang.

Senior BJP leaders like Lal Kishan Advani, Murli Manohar Joshi, Atal Bihar Vajpayee came out on roads demanding a CBI investigation into it. Even the CBI was unwilling to step in. But after a huge public outcry, the investigation was handed over to the CBI.

In 1995, Mukhtar entered politics through the student union of Banaras Hindu University. In 1996, he was offered a ticket by BSP and he won the Mau seat. Ansari’s dominance in the region grew manifold. Mukhtar later fought the 2002 and 2007 UP Assembly Elections independently and won. In 2007, along with brother Afzal Ansari, he joined the BSP again.

Mayawati called him the 'Messiah of the Poor' and said that the cases against him had not been proven. Mukhtar got a BSP ticket for the 2009 Lok Sabha elections. He contested against BJP’s Murli Manohar Joshi in Varanasi. Though Mukhtar lost by mere 17,000 votes, his vote percentage of 27.94% compared to Joshi’s 30.27% had raised eyebrows.

In 2010, Mukhtar was once again suspended from BSP on allegations of continuing with his criminal activities. He formed a new political party Quami Ekta Dal (QED) and contested the 2012 UP Elections on his party’s symbol. He won the seat.

In 2016, there was news of Mukhtar’s party QED being merged with SP. While Mukhtar was in jail since 2008, his brothers Afzal and Sibakatulllah Ansari’s pictures with Shivpal Yadav emerged. It was reported that the then UP CM Akhilesh Yadav was angry with this.

Akhilesh resented aligning with criminal-turned-politicans like Mukhtar Ansari. Not only Ansari, Akhilesh was also cold towards Allahabad MLA Ateeq Ahmed, who he publicly rubbed off on the stage in 2016.

Akhilesh and Shivpal fought over the mergence of QED in SP. Akhilesh won the argument, but Shivpal also went out of the party. This led to a bitter feud between Akhilesh and Shivpal which made news. QED eventually merged with BSP in 2017 and Mukhtar contested the Mau seat on a BSP symbol. He won the seat defeating Mahendra Rajbhar of SBSP (BJP ally) by 6,464 votes. The Yogi Adityanath-led BJP government successfully curbed the Mukhtar dominance in Purvanchal. The government claims that it has arrested 96 criminals of the Mukhtar gang, cancelled gun licenses 72 of his associates, and charged 85 under the Gangster Act.

In 2018, Munna Bajrangi, one of Mukhtar’s gang members was killed in the Baghpat district jail. In August 2020, another Mukhtar associate Rakesh Pandey was killed in Lucknow in an encounter by the police. Coincidentally, both these men were part of the gang that killed Krishnanand Rai in 2005.

The UP government says that it has destroyed, seized, attached property worth Rs 192.5 crore belonging to Mukhtar Anasari and his associates. The government has also expedited trial in 10 out of the 52 cases filed against Mukhtar.

The UP government had to face embarrassment back in 2019 when the Punjab Police took Mukhtar Ansari from the Banda jail. An FIR against Mukhtar was filed in Punjab in 2019 and the police had come down to take Mukhtar at Banda jail. The Yogi government had filed several appeals in the court to bring Mukhtar back to UP’s Banda jail from Punjab. Finally, on SC’s order in April 2021, Mukhtar was brought back to UP's Banda jail.

In an interview with The Lallantop, UP CM Yogi Adityanath took a dig at the Punjab government for showing its slackness in sending Mukhtar back to UP.

In 2018, Mukhtar and his wife were hospitalised after consuming tea served to them in Banda jail. Ansari was brought to Lucknow’s SGPGI for treatment.

In October 2021 too, in a virtual appearance in the MP/MLA court, Mukhtar said that he felt threatened for his life. He said his food might be poisoned. He also expressed his frustration at being treated as a common criminal, whereas in the past he has received services in jail.