Sharing memes and images of 30,000 farmers marching in Maharashtra can only achieve so much

My Facebook timeline is flooded with pictures of the farmer march into Mumbai. 30,000 farmers have braved a five-day walk and given the ongoing SSC exams have decided to reach Azad Maidan by March 11 night itself. The farmers in Maharashtra demand debt waiver. While on social media there are already more than three memes and many cartoons doing the rounds, on the ground, Sikhs are feeding langar to the protesting marching farmers.

I look at social media and people going hammer and tongs against the BJP, the talk about resurgent Left soon after Tripura debacle, and wonder where do we see ourselves in these events. Three days back another 30,000 farmers had gathered in Barnala, Punjab. They demanded implementation of the promised debt waiver. That news did not make it to national headlines. The reason was Barnala is not Bombay. The government in Punjab is Congress.

I wonder if Mumbaikars will remain welcoming towards the farmers as the days pass, 1, 2, 3... traffic is inconvenienced, commuters are hassled. After all, a sea of farmers has simple needs - food and ablutions. What would urban folks on social media do then?

I am reminded of a farmer protest over 35 years back, incidentally on the same dates. On March 12, 1984, more than a lakh farmers had occupied the governor house in Chandigarh. Those were the heydays of the green revolution. India was feeding on Punjab but the farmers were suffering high electricity bills. 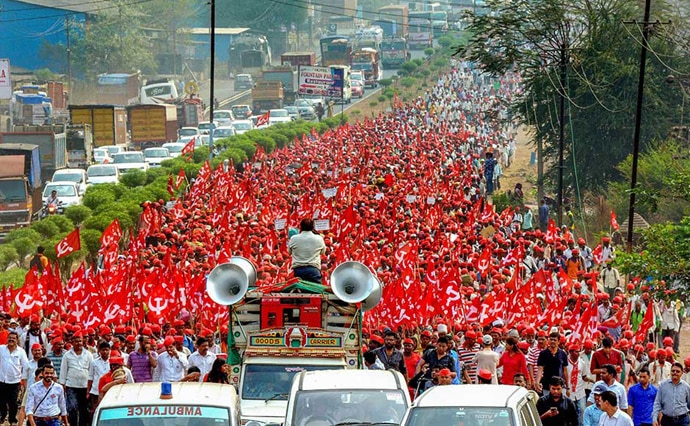 Farmers occupied the golf course, the beautiful lawns, the Sukhna Lake. You know food and ablutions. Sharad Joshi's Shetkari Sanghatana lend support to the Bhartiya Kisan Union protest. The protest lasted until March 18 when government promised a committee to look into the matter. The talks reached an impasse and Akalis jumped in to announce they will withhold wheat going to India. That became one of the many reasons for Operation Blue Star, rest is history.

I am thankful there is no Darbar Sahib in Mumbai. But the real issue is - unlike what I have been reading on friends' status and media reports - that these protests are not about BJP or Congress. They are about you and me and neo-liberal policies. If farmers have to earn better we will need to pay more for food.

Can we afford that?

Will it not create another level of poor who can't afford food? We have all noticed how the Sensex has grown ever since 1991 when neo-liberal reforms were carried out. Ever asked yourself how much of it is based on the Agro stocks which basically are about mechanisation and factory conditions of farming whose real victims are farmers?

Debt waiver is at best an intermediate solution. Unless the farm-grain market-industry-bank-money lender system changes we have no real solution for the agrarian sector. This protest, the one earlier by Tamil Nadu farmers in Delhi, the one by Madhya Pradeesh farmers, and a million others, are a consequence of more than a quarter century of neglect of more than half of India's population that is dependent on agriculture. They are not about one political party or another. They are about the neo-liberal framework we have adopted as the engine of the nation's economic growth. It is the city eating the village, urban India preying upon rural India, the factory neglecting the farmer.

As I travel to Punjab, learning about its huge agrarian distress, I sometimes hear the phrase "Chorasi da geda" - the circle of 84. Initially, I wondered if it was a reference to the Hindu belief of 8.4 million cycles of life and death. Then I realised, it was simply about the year 1984. The horror of that year.

Given how the Centre has treated Punjab over the last few decades, Punjab sees itself as a food-producing colony of the nation state. When Punjab raised its voice - both identity and religion and political economy agrarian - it was dealt a hand so heavy that it has still not recovered.

I hope the nation's farmers don't have to learn such a dire lesson. I hope each of us urban folks recognises our own complicity in what has happened to the agrarian sector. Memes and cartoons just go that far, they hardly solve anything. Solidarity.