Mumbai rain mess is here to stay. But people are only paying for their choices

Voters in the Maximum City never punished those responsible for the 2005 mess.

July 26, 2005, changed Mumbai forever. It taught Mumbaikars that rain isn't just beautiful, it has a rather ugly side too — it can claim lives as well.

However two years later in 2007, Mumbai voted the Shiv Sena-BJP combine back to power in the Brihanmumbai Municipal Corporation (BMC) elections and the Congress-NCP won the 2009 polls comfortably, with a high number of seats from Mumbai. 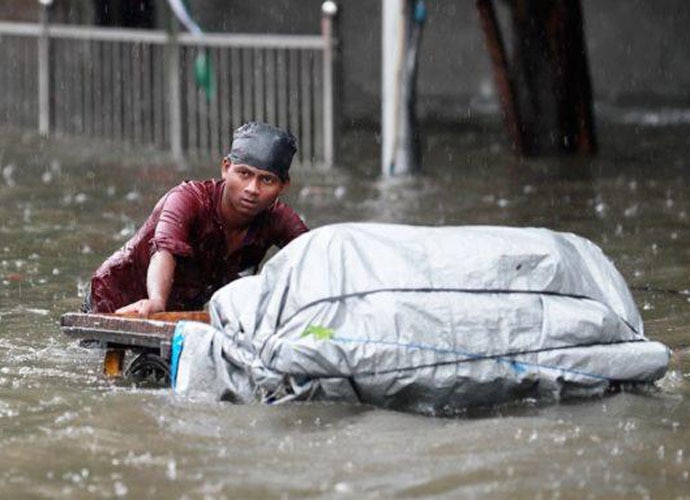 In 2005, Mumbai learnt rain can be fatal too. Source: Reuters

Both elections sent a clear signal to the politicians that they had nothing to fear because absence of even the most basic civic amenities don't bring governments down.

Mumbai, however, wasn't always like this. A couple of years back rains in Mumbai meant a flood of people reaching the Marine Drive or Worli Sea Face to soak in the weather. Coverage of rains in the Maximum City meant headlines like, "Mumbai main jhamajham barish". Photos and videos of the city's rain back then were ones that could cheer up people.

So, in 2005, when it started raining, no one thought that they should sit at home. What precipitated in Mumbai much to everyone's horror was a catastrophe that left 300 people dead.

I remember taking a helicopter sortie with the BMC disaster management officials. What I saw was unbelievable. My eyes refused to believe that this could happen to my city. The images on TV exposed all of us to horror which can send a chill down the spine even today.

As a television journalists 2005 was a year which has forced me to now see the three-month-long monsoon season as a terrible phase. As soon as July sets in, one starts spending sleepless nights with every heavy spell of rain waking you up from your slumber. You start making calls for deployment of reporters early in the morning in case the city gets flooded. The Mumbai civic authorities ensure this deployment is justified with the break of dawn that sees commuters stranded on roads and at railways stations.

I have now started to believe that no matter how loud we complain and cry about it, the situation is not going to change.

Mumbai is beyond repair.

Thirty years back, Mumbai was a metropolis comprising small urban and semi-urban suburbs. There were many places which acted as catchment areas when the downpour was heavy. The drainage system, though built in 1860, could carry the burden of Mumbai's growing population.

But all that suddenly changed when a land-starved Mumbai was fed to big builders for constructions by politicians who acted like greedy rulers of the city. Suddenly, the catchment areas were taken up by high-rise towers.

Rivers like Mithi, Dahisar, Poisar narrowed as their catchment areas were encroached upon by slums as politicians fuelled hope that turning slums into free houses under slum rehabilitation scheme was impossible.

The whole network of 400kms of underground drainage system started getting choked due to garbage accumulation. The drainage system that was designed to ensure a flow of 25mm of rainfall per hour proved inadequate and the streets started flooding. July 26, 2005, saw the nadir of what reckless and greed-driven city planning can result in.

After 2005, the government declared it will turn Mumbai into Shanghai.

Among the ambitious plans that were announced was the Brihanmumbai Stormwater Disposal System (BRIMSTOWAD), were eight pumping stations to be set up across the city to pump out accumulated water. About 58 projects were to be undertaken, including cleaning up and widening of rivers and clearing encroachments upon drainage systems, and widening of storm water drains to make them capable of carrying 50mm of rainwater per hour.

The Centre, state and the BMC were all supposed to be part of this 'Mumbai to Shanghai' project.

Thirteen years later, only five of the eight pumping stations have been completed and only 30 out of the 58 proposed projects are near completion.

The Mithi river, which had a separate authority assigned to it for its clean-up, is still stinky despite nearly Rs 1,200 crore having been spent on it. The announcement of these projects was a political necessity because it had to be proven to people that action was being taken to ensure 2005 is not repeated. It was also important because the episode had become an international shame for India because Mumbai happens to be the business capital of the country.

It was imperative for the government to show that things on the ground were moving.

Though 13 years later, nothing seems to have changed, voters in Mumbai never punished those responsible for the mess.

When the media started reporting about the flooded streets of Mumbai year after year since 2005, politicians chose to make fun of it.

A well-known example of this is a joke cracked by former chief minister Vilasrao Deshmukh on the construction of a flyover over Milan subway, which faced regular waterlogging. Taking a dig at the media, Deshmukh said, "Now you will have to find some other spot to get TRPs."

Unfortunately, it is still very easy to spot instances of civic mess across the state, particularly Mumbai.

Issues like the completion of BRIMSTOWAD were not taken up in elections, perhaps, because they are too boring to attract voters and their votes. As a result, since 2005, the Congress-NCP combine has remained in power for nine years and the BJP-Shiv Sena for four, but the project remains incomplete.

I am sure the Mumbai metro network will continue to widen, but the streets will remain flooded because politicians know they can get away easily in the future — like they have in the past.

Post your comment
#Civic mess, #Shiv Sena, #BMC, #Mumbai Rains
The views and opinions expressed in this article are those of the authors and do not necessarily reflect the official policy or position of DailyO.in or the India Today Group. The writers are solely responsible for any claims arising out of the contents of this article.