Muslims as ‘minority’: What has the tag meant for the community, and for India’s politics

This ‘special status’ has been used as driving force for the narrative of ‘appeasement’.

Muslims are always described as a ‘minority’.

There is a positive portrayal of their minority status, which celebrates the triumph of Indian secularism. The protection of Muslims’ religious and culture rights are often evoked to underline the success of the ‘unity in diversity’ thesis.

However, there is an equally powerful negative depiction of Muslims as a minority. It is argued that minority rights given to Muslims go against the principle of equality. The minority status of Muslims, it is alleged, legitimises the politics of appeasement and encourages separatist tendencies. The protection of Muslims’ rights are often evoked to underline the success of India's secularism. (Photo: PTI/file)

The first set of questions is technical — such as, what is the legal-constitutional meaning of the term ‘minority’? And, what is the criterion to identify a minority?

The second set of issues is political.

If Muslims are seen a national minority, shall we call Hindus of India a ‘national majority’? And, for that reason, is it legitimate to interpret the recognition of Muslim distinctiveness as a form of political appeasement?

It is worth noting that minority/majority in colonial India was always recognised as permanent entities, especially on religious basis.

Hence, Hindus as the majority and Muslims and other non-Hindu groups as minorities were recognised as legitimate stakeholders. This communalisation of minority/majority eventually led to the Partition.

Recognising this deeply ingrained communal impulse, the Constituent Assembly of India worked out a highly undefined and fluid conception of a ‘minority’.

The first feature of a minority categorically stresses upon the fact that ‘minority’, being a numerical expression, cannot be attributed to any particular social group permanently. 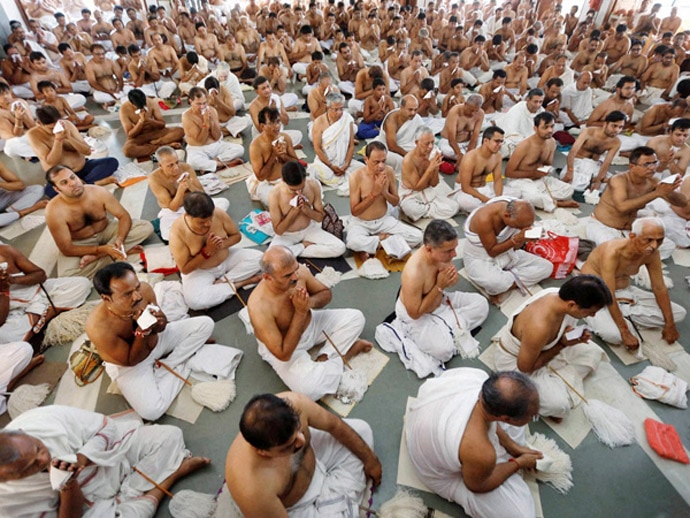 In 2014, Jains were notified as a national minority. (Photo: PTI/file)

In this sense, Muslims, Sikhs and Christians ‘become a minority’ on contextual basis.

The second constitutional feature suggests that apart from religion, language and culture should also be taken into consideration for defining a minority. That is the reason why we have constitutionally recognised linguistic and cultural minorities in India.

In the post-1992 period, a third feature — namely backwardness and the marginalised — was also evolved.

Following this mandate, the Government of India notified five religious communities: Muslims, Christians, Sikhs, Buddhists and Zoroastrians (Parsis) as national religious minorities in October 1993. This list was amended in 2014, when Jains were notified as a national minority.

Does the act of defining minorities at the national level symbolise a departure from the established Constitutional principle? Or is it an extension of the principle—an attempt to fill up the emptiness of the official category called ‘minority’?

Indian courts have responded to these questions in an elaborated manner.

The judiciary has conceptualised the “distinctiveness” as the decisive legal criterion. In addition, the courts have also given emphasis on the spatial location of a social group to interpret religious and/or linguistic distinctiveness.

In other words, if a minority is to be defined with regard to a national law or policy, the population of that community has to be taken into consideration. However, if the matter is concerned with a state legislature, these minorities have to be determined in relation to the population of the state. The judgement in the DAV College vs the State Of Punjab, 1971, is a relevant example.

Let us look at the political reception of these sophisticated legal explanations. It has become easy to argue that Muslims are appeased and pampered at the national level. (Photo: PTI/file)

We must remember that the NCM Act of 1992 was an outcome of the post-Babri Masjid Congress politics. The move to declare five religious communities as national minorities, in a way, also strengthened the already worked out imagination of ‘Hindu majority’.

It had now become easier for the Hindu essentialists to argue that the minorities, especially Muslims, are appeased and pampered at national level. This argument evolved in a political rhetoric in the mid-1990s to underline Hindu subjugation.

The UPA regime initiated an interesting academic politics of the ‘minority’. This politics had two very clear facets — it was primarily concerned with appointing various study-based commissions, and at the same time, it aimed at deconstructing the minority category.

The manner in which Muslims are differentiated from other minority religious groups in the post-2000 period, especially after the publication of the Sachar Report, is a revealing example of this politics. No doubt that the Sachar Report was successful in legitimising Muslim backwardness as a political issue, but this study did not have any direct impact on the actual socio-economic status of Muslims (as revealed by the Post-Sachar Evaluation Report 2014).

Yet, the Sachar Report emerged as a symbol of Muslim appeasement. The BJP appropriated it to produce a powerful narrative of equality-based affirmative action.

The slogan Sab Ka Sath Sab Ka Vikas is often presented as “development of all and appeasement of none”.

In fact, Muslim appeasement has become the dominant narrative of Indian politics. No politician is interested in deviating from this majoritarian impulse in the name of opposing appeasement!

The minority status of Muslims of India has now become a highly contested issue—not merely for Muslims, but also for all those who believe in the political morality envisaged by the Constitution of India.

Also read: How myths about Muslim population growth get the equation wrong

Post your comment
#Minority status, #Muslims in India, #Sachar committee report, #Appeasement politics
The views and opinions expressed in this article are those of the authors and do not necessarily reflect the official policy or position of DailyO.in or the India Today Group. The writers are solely responsible for any claims arising out of the contents of this article.