Government does not seem keen on pursuing the goals of aviral and nirmal together.

It was four summers ago when Narendra Modi, the then prime-ministerial candidate of the BJP, had made an emotional statement. He was in Varanasi to file his nomination for the 2014 Lok Sabha elections.

Knowing that the Ganga holds a special place in the collective psyche of India’s majority, Modi had carefully chosen his words and added that emotional touch. Later, that line was perfectly exploited to the hilt by the BJP’s publicity machinery.

His words were: “Mujhe Maa Ganga ne bulaya hai (I have been called here by Mother Ganga).”

The first step that Modi took came after his ministers took oath. The name of the ministry responsible for Ganga was changed to “Ministry of Water Resources, River Development and Ganga Rejuvenation”.

Also, the earlier National Ganga River Basin Authority was dissolved, and a National Ganga Council was proposed. But babudom issues prompted the government to convert National Mission for Clean Ganga (NMCG) into an overarching authority. Not much seems to have been done till the end of financial year March 2018. Photo: PTI

But as the Modi government completes four years, there are no signs of a clean Ganga. A project that the prime minister claimed was close to his heart and one for which he has taken personal interest has been lagging seriously behind schedule.

The initial years were almost wasted when Uma Bharti was the minister for water resources and Ganga rejuvenation. Since Nitin Gadkari was given the full-time additional charge of this ministry, there seems to be a semblance of some work being done, DPRs prepared, projects pushed, and money flow controlled.

Overall, even when the work has been going on in right earnest everywhere, “I can now say with some confidence that the Ganga will be 70-80 per cent clean by March 2019,” Gadkari told the media as he presented a detailed report card ahead of the completion of four years of the NDA government.

“It is a general perception that nothing significant is being done under Namami Gange Programme, but this is not correct. 251 Gross Polluting Industries (GPI) have been closed and closure directions have been issued to non-complying GPIs,” he said, and also added, “Real time monitoring of pollutions is being done in 938 industries. As many as 211 main ‘Nallas’ have been identified which are causing pollution in Ganga and 20 modular STPs are being deployed to treat Nalla water. Regular review meetings with all the states government officials, contractors, consultants are being done and obstacles regarding DPR’s, tendering process, finalisation of design, payment to contractors are being removed for speedy completion of projects.”

From an almost pompous announcement of “we will clean the Ganga” to admitting that it will be only 70-80 per cent clean, this is a major climbdown for a government for which the countdown for the Lok Sabha polls has already begun.

Not much seems to have been done till the end of financial year March 2018. “Work is going on full steam. It is just that we are practically re-assessing the goals,” an official said. The bigger problem, in fact, lies with what has not been done.

“Namami Gange” is an integrated Ganga Conservation Mission, an umbrella programme with the aim to integrate previous, currently ongoing and new projects planned as part of the programme at an indicative cost of Rs 20,000 crore — a non-lapsable fund.

Gadkari went on to detail the statistics, numbers and data and listed the whole range of works that have been done, are in the pipeline, proposed et al. But in the end, the promise is to have only 70-80 per cent of the Ganga cleaned.

Only nirmal, not aviral

But more worrying is what he did not promise. Environmentalists have always maintained a very simple basic definition of a river — it needs to be “aviral”, a water body that flows continuously, and “nirmal”, one that is “clean”.

Even when the government has rearranged its targets for cleaning the Ganga, the worst part is its refusal to concede how aviral and nirmal need to go together for any river.

“Aviral has lot of aspects and needs to be studied further. Modiji has made it clear that cleaning the Ganga is our priority number one. Once we do it to a major extent, the issue of aviral will be discussed,” Gadkari told the media.

Among the many issues raised by the Comptroller and Auditor General (CAG), which had undertaken the “Performance Audit of Rejuvenation of River Ganga”, a major section was dedicated to e-flow — the ecological flow of the Ganga.

Pointing out how “aviral dhara or continuous flow is important for restoring the wholesomeness of the River Ganga”, the NGRBA notification (2009) had emphasised the urgent need “to maintain ecological flow in the River Ganga with the aim of ensuring water quality and environmentally sustainable development”.

The CAG said “there is an urgent need to maintain ecological flow in the river Ganga with the aim of ensuring continuous flows throughout its length so as to restore its ecological integrity that enables it to self-rejuvenate”. 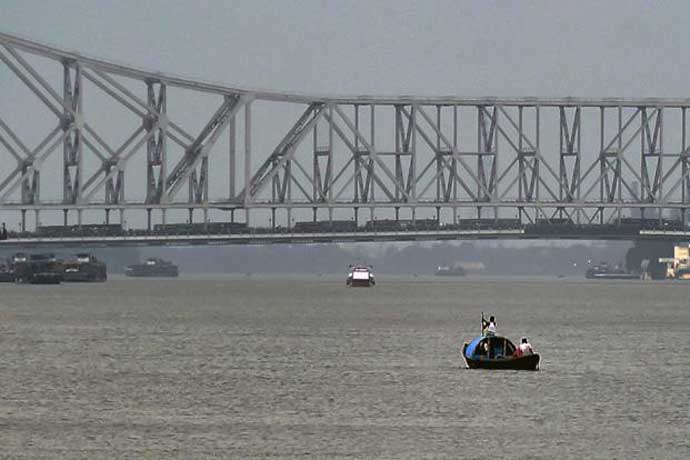 A serious flaw but one that the government has put on the backburner. Photo: PTI

Exactly what experts and environmental activists have always maintained — that a continuous flowing river is one that can cleanse itself. The CAG had further pointed out: “The NMCG did not identify places of discontinuity of water flow due to engineered diversion or storage and did not initiate any remedial action thereof. NMCG did not determine the magnitude of ecological-flow at different points for the River Ganga. It also did not assess the linkage between ecological flow and water quality. It was in the process of obtaining data on flow during different seasons, for the period 2015-17 from Central Water Commission. Thus, the NMCG has neither formulated the parameters for determination of ecological flow at different points nor identified the particular impediments affecting the flow.”

A serious flaw but one that the government has put on the backburner.

This leaves room for suspicion. Why is the government not keen on pursuing the goals of aviral and nirmal together? Is it because it still wants to construct dams upstream of Rishikesh in Uttarakhand? Or is it because the government is majorly promoting water highways which might need the construction of barrages downstream of Allahabad?

There are no clear answers to these questions. What exactly is this government’s intention?

Without the aviral dhara and nirmal dhara together, whatever else will be done will only be a mockery in the name of Namami Gange and Ganga cleaning. The Ganga is a perennial river fed by snowmelt and ice melt almost round the year. Ganga’s is the largest river basin in India, constituting 26 per cent of the country's land mass and supporting about 43 per cent of its population. The basin covers an area of 10,86,000sqkm, extending over India, Nepal and Bangladesh.

The river flows through five states — Uttarakhand, Uttar Pradesh, Bihar, Jharkhand and West Bengal – of India before it drains into the Bay of Bengal.

#National mission for clean ganga, #Ganga, #Clean ganga, #Namami Gange
The views and opinions expressed in this article are those of the authors and do not necessarily reflect the official policy or position of DailyO.in or the India Today Group. The writers are solely responsible for any claims arising out of the contents of this article.