Modi government has failed on all fronts, it has no option but play the communal card

Prime Minister Narendra Modi visited Azamgarh in Uttar Pradesh to inaugurate the Poorvanchal Expressway project, which was apparently already inaugurated by Akhilesh Yadav in 2016. Never to lose an opportunity to make loud self-aggrandising speeches, the PM attacked Congress president Rahul Gandhi for allegedly stating that the "Congress is a Muslim party" and also raked up the issue of Muslim women and triple talaq claiming that while he is trying to "save" lakhs of Muslim women, Congress is creating obstacles by protesting against the Triple Talaq Bill. 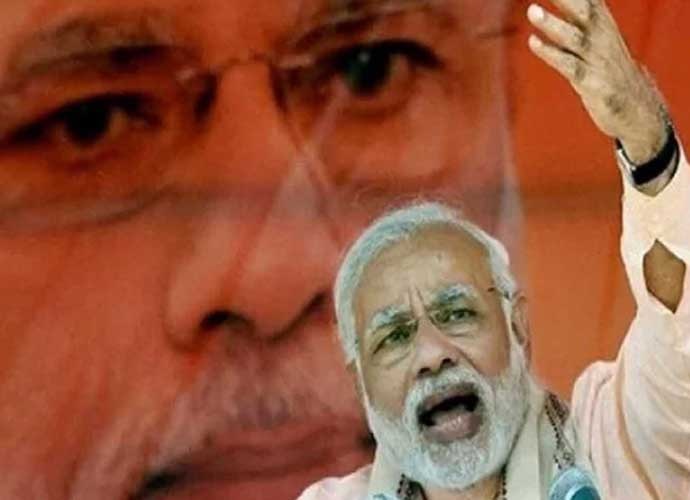 At the outset, Rahul Gandhi has never made any such statement. It was reported by Urdu daily Inquilab on July 12 that in a meeting with Muslim intellectuals Rahul said, "Yes, Congress is a Muslim party," but the report was soon denied by Congress spokesperson Priyanka Chaturvedi on Twitter. Thereafter, several eminent personalities, such as historian Irfan Habib and Farah Naqvi, who were present at the same meeting, confirmed that no such statement was made.

This is absolute lies&shameful spin by the newspaper. The BJP using it to further its own agenda, yet again, exposes their desperate tactics to mislead the nation. However this will not deter us to fight for India's founding principles& its democratic values. https://t.co/EN15vL7oNa

Yet none of this deterred Modi from going ahead and creating a blatantly false narrative involving communal hate. Prior to this, during Gujarat elections, Modi had raked up similar completely baseless allegations against respected dignitaries like ex-prime minister of India, ex-vice president of India, Pakistan's high commissioner, Pakistan foreign minister and Congress leaders insinuating that there is a conspiracy being hatched by Congress and Pakistan to defeat the BJP in Gujarat elections.

It is bad enough that these allegations sound like tragic delusions of a schizophrenic patient. It gets worse when the PMO actually gives it in writing, in response to a RTI application, that Modi had no basis whatsoever to make these allegations.

Modi, however, continues to stoop lower and lower even as the entire country calls out his bluffs and condemns his actions which are unbecoming of the office he holds. Not only are the content of his speeches in bad taste and full of blatant lies and misinformation, even his body language and mannerism have become bizarrely threatening and provocative.

Modi's speech at Azamgarh was not just another normal campaign speech. It was a frantic display of sheer panic. He came across as a ruthless autocrat enraged and crippled with fear of losing power. He trembled with rage, his voice shrill, eyes popping out, wrinkles on the forehead, eyebrows twitched.

It is rather intriguing why Modi is showing the signs of fear and desperation of an uncanny kind. In a democracy you win some elections you lose some elections, but Modi seems to have a fear larger than that of just losing elections. Typically, such fear is seen among autocratic leaders who might be sitting over human rights violation and are at the risk of facing criminal prosecution if they lose power.

BJP's 2014 election campaign was a refreshing change. They mainly fought on development agenda. The Gujarat model, acche din, corruption-free nation, women's safety, lower petrol prices — were some of the promises. Hindu Rashtra or Hindutva was nowhere in the scene. People of India thought BJP had left Babri and Godhra behind and were willing to make a fresh start based on real issues, not religion.

But the pretence was dropped soon after coming to power. Initially, it was the fringe elements, which started giving out the message that nothing has changed in the BJP camp, a theocratic homogenous Hindu Rashtra was still their main agenda. The same narrative has now been taken up by senior party leaders, ministers, and even PM Modi. The line between fringe and core began to blur.

The first killing by self-proclaimed cow vigilantism was heard in September 2015 in Dadri, UP. The incidents of such killings kept increasing through the last four years. Data collected in 2017 showed there has been 80 per cent rise in such killings after Modi came to power, and 90 per cent of those killed were Muslims. Amnesty International's Halt the Hate website currently documents over 200 such killings. Only one of these cases have seen a trial and conviction, when in March 2018 a Special Fast Track court in Ramgarh, Jharkhand, awarded life imprisonment to 11 of the 12 accused persons, including a local BJP leader.

By June 2018, the Jharkhand High Court granted bail to eight out of the 11 of them. As soon as these eight came out of jail BJP's Union minister Jayant Sinha publicly honoured them with garlands and sweets, making a global spectacle of how firmly India's largest political party puts its weight behind men who lynch Muslims.

The line between fringe and core has now been fully wiped out.

Meanwhile, several reports and statistics stand proof to the fact that Modi government failed miserably on real issues — economy, jobs, women's safety, social harmony, agrarian crisis, foreign policy, defence, environment, internal and external stability. None of the poll promises have been fulfilled. On the contrary, all issue that were used as poll planks during 2014 elections, stopped being issues post 2014. And if any of us made noise about them, we were told, we either don't understand issues or are anti-nationals:

"Bahat hua beti par waar, ab ki baar Modi Sarkar" — NCRB data shows violence against women has increased in the last four years but it is no longer an issue because "we should not politicise rapes".

Rising prices of petrol was a major issue before 2014. Post 2014, prices kept rising and in June 2018 India saw the highest ever petrol diesel prices. We were told we don't understand how prices work, and that if these prices are lowered, there will be no money left for social schemes. During the 2014 campaign, we were told there is so much black money in Swiss banks that if all are brought back to India, every citizen could potentially get Rs 15 lakh in their accounts. Post 2014, Amit Shah said "Rs 15 lakh in every account" was a figure of speech, wasn't to be taken seriously.

In April 2018, the Association for Democratic Reforms (ADR) reported that in these four years BJP has emerged as India's richest political party. PM Modi recently inaugurated BJP party headquarters which is claimed to be world's largest political party office. Amit Shah's son Jay Shah's company saw a turnover that reportedly grew 16,000 times in these four years. Certain cooperative banks in Gujarat related to Amit Shah collected over notes worth Rs 3000 crore within first five days of demonetisation before it could be announced that cooperative banks will not deposit the demonetised notes.

I can go on but for brevity sake, take my word for it, on nine out of 10 markers, this government has failed and on rest there are question marks. With this track record Modi has to go to polls in 2019. What do you think his poll narrative would be? He cannot possibly resell the same acche din and Gujarat model. In fact, it is imperative that he diverts people's mind from those issues by raking up the tried and tested communal issues:

What remains to be seen is whether people of India would fall for communal narrative or will they vote on issues.