Newsmaker of the Year: The power of two

India Today Group Editor-in-Chief talks about how the prime minister and his general set a radical new agenda that reshaped Indian politics in 2019, in the January 6 edition of the India Today Magazine.

It's never easy choosing India Today's Newsmaker of the Year, but our task was much easier in 2019. In May this year, Prime Minister Narendra Modi led his party to a landslide Lok Sabha victory, even larger than the one in 2014. The win came against heavy odds — an economic slowdown, agrarian distress and anti-incumbency. It cemented Modi's rise as a political phenomenon who successfully converted this election into a presidential-style referendum — him versus the rest. Much like Indira Gandhi did in 1971, the last prime minister to win a second consecutive majority. Modi has been our Newsmaker of the Year three times — more than anyone else — since we introduced the concept at the end of 2001.

All that has happened in the past few months would not have been possible had Modi not won the mandate he did with his charisma and hold on the masses. 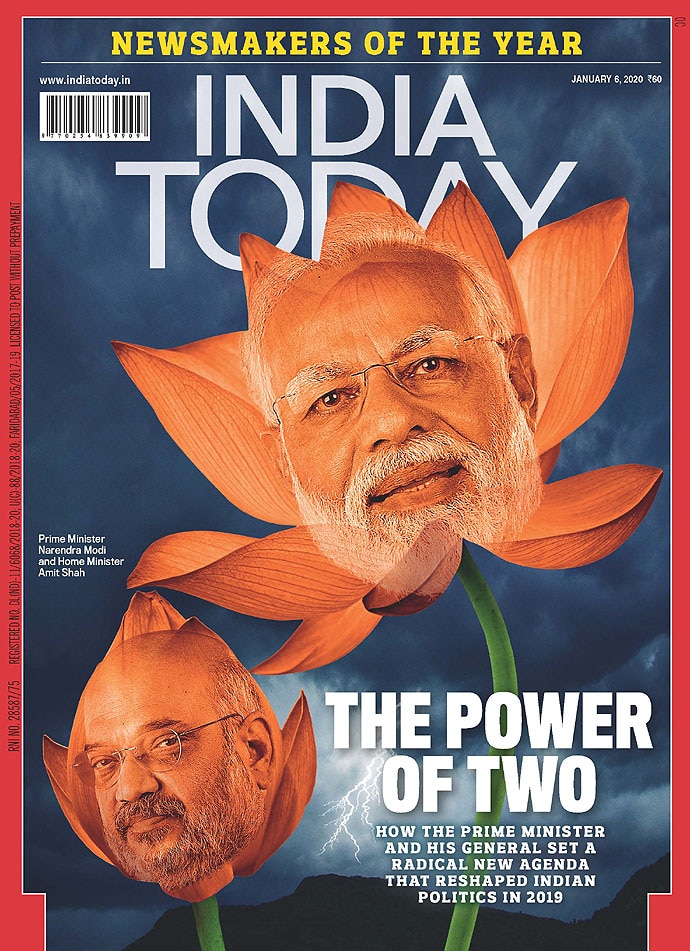 This government has been on steroids ever since it came to power in May. Within eight weeks, it made history by scrapping the special status of Jammu and Kashmir under Article 370 and redrawing the map of the state by bifurcating it into Union territories. Home minister Amit Shah was the man in the spotlight, tirelessly explaining the government's point of view. The state has seen, among other things, an unprecedented four-month-long internet shutdown. Several key state politicians are under house arrest, moves that have aroused international concern.

In December, the government tabled the controversial Citizenship (Amendment) Bill, 2019, which became the Citizenship Amendment Act (CAA) after being passed in both Houses of Parliament. Here again, it was Shah who led the charge aggressively in Parliament. He also announced that this would be combined with the National Register of Citizens, which, he said, would be concluded by 2024. This has led to nationwide protests, some of them violent, which has damaged the image of the government, domestically as well as internationally.

Quick to recognise a deteriorating situation, Prime Minister Modi, at a BJP rally on December 22 at Delhi's Ramlila Maidan, said his government has had no discussion on a nationwide NRC. A chastened Shah echoed the line in a TV interview two days later.

That said, there is no doubt at the end of 2019 that the prime minister and his general have together radically reshaped Indian politics and set the agenda for the nation. For this reason, they have become our Newsmakers of the Year.

Indian politics is yet to see anyone like them. Former prime minister Atal Behari Vajpayee and Lal Krishna Advani would have been close contenders, but then they were close friends and contemporaries. Modi is 14 years Shah's senior and they share more of a guru-shishya relationship. When Shah joined the BJP in Gujarat in the early 1980s, Modi spotted his talent as a grassroots organiser. The duo worked together to whittle away at the Congress's influence in the state. When Modi took over as chief minister of the state, it was state home minister Shah who was his No. 2.

Shah has not been publicly declared as the No. 2 in the government, but he is very clearly the go-to general for Supreme Commander Modi.

Cut to 2019, and the now home minister remains the prime minister's right-hand man to execute his political agenda. This after using his position as BJP president to transform the party machinery into an electoral juggernaut that powered Narendra Modi's spectacular victories in the previous two general elections, specially the most recent one in 2019.

Not only does Shah bridge the gap between the party and the government, he is also the chief executor of this government's desire to fulfil crucial items on the BJP and Sangh parivar's agenda — (effectively) repealing Article 370, building the Ram temple in Ayodhya, and probably the Uniform Civil Code next.

Despite their age difference, Modi and Shah seem a made-for-each-other duo. One is a charismatic personality, brilliant orator, keen strategist, full of audacious ideas, highly image-conscious, risk-taker and a star on the international stage. The other is an enforcer, organiser, micromanager, unconcerned about his image, has no international presence, freely interacts with the press unlike his mentor, who prefers to take the stage instead, and quite willing to play the bad cop of the duo. But they do have one thing in common: they both live and breathe politics. They are 24/7 politicians, unlike many leaders in the opposition. They share a burning desire to be in power and the ambition to reshape the country to the BJP's nationalist agenda.

And they are not going anywhere in a hurry. They will continue to dominate the headlines in the years to come. On that note, I wish our readers a happy and, most importantly, a prosperous New Year.

(India Today Editor-in-Chief's note for the cover story, The Power of Two, for January 6, 2020)