Angry Hanuman or Hungry Kisan? Who will decide 2019?

The 'angry Hanuman' raging against liberal voices, or the distraught and economically backward farmer with a blistered foot — your vote on one of these two images will decide who will rule India for the next five years.

With less than 10 days to go for General Elections 2019, which of these two images is on top of your mind?

The 'angry Hanuman' drawn by a 25-year-old graphic designer from Karnataka? Or the blistered feet of a farmer who walked a long march bare foot to draw our attention to the farm crisis? Think hard. It is one of these two images that will make you decide who will rule India for the next five years.

Last time, you fell for the chaiwala — the image of an honest, hard-working common man promising "acche din" with a cuppa. Growth, jobs, 'sabka saath, sabka vikas', and more. But hope died in the intervening years. The promised "acche din" did not come. The farmer, the small trader, the graduate looking for a job, the Dalit and the Muslim seeking some semblance of social justice are not drinking tea with relish.

So the 'Chowkidar' is here. He has his origin story in the 'angry Hanuman'. The affable Hanuman, the Ram Bhakt and the loyal soldier, is raging against the system.

But PM Modi is the system, no?

No. The 'angry Hanuman' is raging against the Left-liberal, the secular, the Muslim man eyeing the Hindu girl and multiplying in large numbers. But Hanuman is god. And gods take human shape. So he becomes the Chowkidar. The Chowkidar is the Avenger who fights the corrupt, the dynast, the Pakistani, the Left-liberal. There is an attack in Pulwama. The Chowkidar flies a jet and bombs Pakistan, kills 300.

40 ka badla 300 se (We will avenge our 40 by killing your 300). Ghar mein ghus ke marenge (We will enter your house and kill you). Rafale bhi layenge (We will also bring in the Rafale. Dynasts ko rokenge (We will stop the dynasts from flourishing). Desh surakshit karenge (We will make the country safe).

It’s a powerful image, you have to agree. That chain-smoking, womanising Don Draper from Mad Men would surely doff his grey hat. 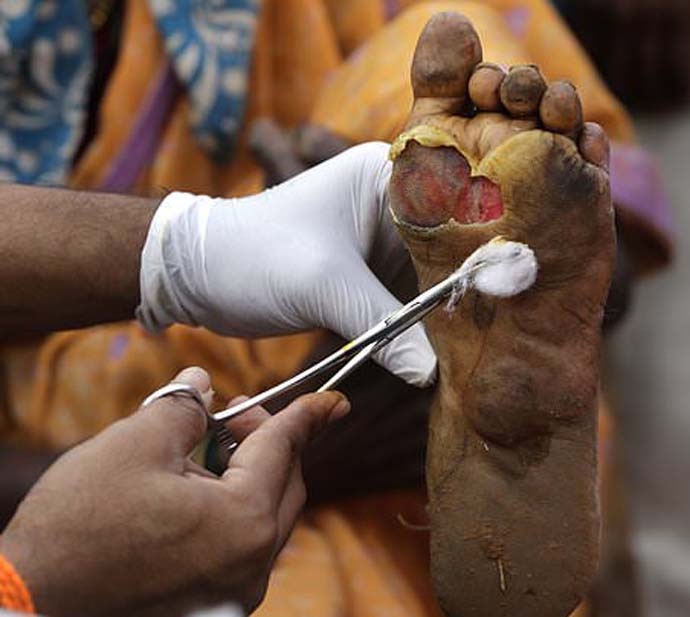 The injured foot of a farmer after marching for several days, seeking farm loans to be waived off. (Source: AP)

There is another image for those of you who haven’t turned Chowkidar yet — the image of the 'hungry kisan (farmer)', one with blisters on his feet.

A metaphor of dashed dreams. Sun-burnt, sweaty-faced, parched, walking a long walk against a government that only talks. “When Rs 3.5 lakh crore of 15 corporate houses loans could be waived off in last four years and another Rs 12.5 lakh crore loan has been declared as non-performing assets, then farmers’ loans can also be waived off,” Rahul Gandhi had said. And most of us had ignored.

The farmer is the last man in the line. The Chowkidar is the first. Who will you remember 10 days from now?

Also read: From development to Hindu sentiments: How Modi shifted the focus from 2014 to 2019 in Wardha