And those actions are missing here. It is appalling that Vijayvargiya remains a member of the party, a week after beating up a govt official with a bat, cameras capturing every detail.

His act, caught on camera, failed to evoke any remorse from the junior Vijayvargiya, despite him spending a couple of days in jail.

#WATCH Madhya Pradesh: Akash Vijayvargiya, BJP MLA and son of senior BJP leader Kailash Vijayvargiya, thrashes a Municipal Corporation officer with a cricket bat, in Indore. The officers were in the area for an anti-encroachment drive. pic.twitter.com/AG4MfP6xu0

On July 2, Prime Minister Narendra Modi 'lashed out' at Akash, saying, "Whoever it may be, whoever's son he may be, such arrogance, misbehaviour cannot be tolerated and action should be taken against them." He also reportedly slammed those who had started firing guns when Akash was released from jail, saying that the people who went to welcome him should also be thrown out of the party.

Modi's talk has been applauded by many — but the move fails to impress on several counts.

It is appalling that Vijayvargiya is still a member of the party. The party has reportedly sent a notice to him, wanting an explanation for his behaviour. 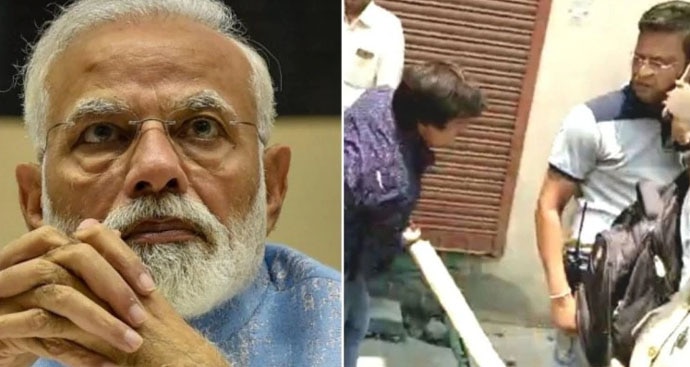 Angry. But what next? Narendra Modi has lashed out at Akash Vijayvargiya. Why is he still in the party? (Photo: India Today)

But there can be absolutely no 'explanation' for such behaviour. Akash's act needs no proof either — it's there on camera. The party isn't sending out a positive message by giving him an opportunity to explain himself. He should have been expelled by now.

As for Modi's anger directed against Akash, well, a similarly 'angry Modi' had promised to not forgive BJP MP Sadhvi Pragya for calling Mahatma Gandhi's assassin, Nathuram Godse, a 'patriot', during the heated Lok Sabha election campaign in Bhopal. Sadhvi Pragya, out on bail in the Malegaon blast case, continues to be a sitting BJP MP. Her remark shocked the PM: But Sadhvi Pragya continues to enjoy power, despite Modi saying he won't forgive her. (Photo: PTI)

It is not enough for Modi to hold 'disciplinary classes' for his party members. They must face action and that action must be timely and visible to send out the message loud and clear — there is no space for violence and propagators of violence in new India.

The one person who has been spared 'Modi's fury' in this case is BJP general secretary Kailash Vijayvargiya. The senior BJP leader on July 1 termed the bat assault incident involving his MLA son as "unfortunate", saying the latter raised his voice in support of a poor family, not a builder. He said both his son and the civic administration were "novice players" and that the dispute could have been avoided.

A senior party leader should not be talking like this. The BJP should question him too for practically justifying violence. No matter whose cause Akash was fighting for, nothing gives him a licence to attack anyone.

The BJP has been at the receiving end of violence in West Bengal and Kerala itself. It knows the pain of being attacked, the chaos of urban violence. It also understands the implications of covering up the actions of those indulging in violence. These range from public disapproval to the slow poisoning of the system itself.

Modi's anger must translate into action. And that action must be visible.