This article has been co-authored by Amitabh Tiwari and Subhash Chandra.

The Modi government celebrates two years in office on May 26. Popularity ratings of Modi continue to soar with the BJP winning five out of ten states which went to polls in the last two years. There has been an absence of scams and inflation has been under control.

India was the fastest growing economy in the world at 7.6 per cent in FY2016 (surpassing China). Lower oil prices (lower by 40-50 per cent) have helped reduce current account deficit from five per cent of GDP in FY12 to one per cent in FY16 and largely negated the drop in exports (down 17 per cent) and the impact of rupee depreciation (16 per cent). FDI increased by 37 per cent in FY16 reaching $39.2 billion exhibiting country's attractiveness among investors.

A lot has been talked about growth numbers as the government has changed the base year from 2004-'05 to 2011-'12 and also tweaked the formula for calculation of GDP. The debate has been settled and growth has improved from an average of six per cent in the last two years of the Manmohan regime (FY12-'14) to 7.4 per cent during FY14-'16.

Also read: Two years on, Modi as an idea is over

Good initiatives like Make in India, Digital India, strong push for national highways and railways have been undertaken. However, tangible results on these will take some time to materialise. Another milestone has been the passing of the Insolvency and Bankruptcy Bill which should help in improving creditor rights and could help banks in shoring up their high and rising non-performing loan portfolios. The Goods and Services Tax (GST) Bill is caught in a political chess between the BJP and Congress. 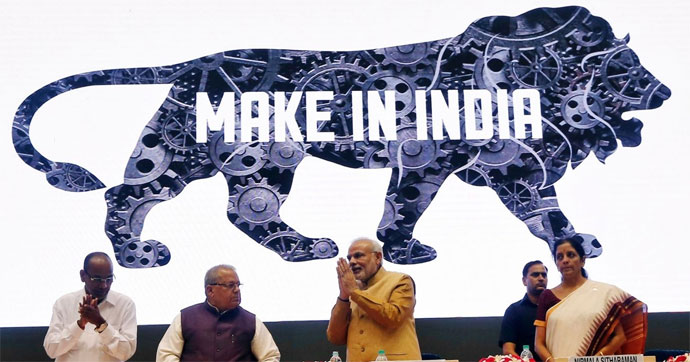 Tangible results on initiatives like Make in India will take time to materialise.

We believe the government missed a big chance last year and could have left more money in the consumer's pocket taking advantage of low crude prices instead of filling its coffers through excise duty on fuels (lazy money). Consumer spending can have a significant spiralling effect on the Indian economy.

While GDP numbers look good, high NPAs of banks means low credit growth ahead. Profitability of the corporate sector has been hit because of the global slowdown and low commodity prices, impacting investments in new projects. Hiring in most of the private sector companies is on a freeze.

That said, India continues to remain a bright spot in the otherwise bleak global economic atmosphere forecast by the International Monetary Fund (IMF).

On structural parameters though, India scores relatively poorly compared to the other BRICS countries. Its rank on doing business and perception of corruption have clearly improved under the Modi regime. Though India exceeds China's growth rate, India's growth model is entirely different based on domestic demand and productivity growth. The demographic dividend is an added advantage for India. Its population is much younger compared to most advanced economies and China, which implies that its labour force will continue to expand rapidly. While this presents opportunities, this could also be humbug of the Modi government as it needs to increase growth and create jobs.

While overall GDP growth appears to be steady between seven to eight per cent, multiple growth challenges remain. For instance:

4. Overall weakness in the banking sector

Of these, the agriculture sector is likely to recover this year with a strong monsoon and the onset of La Nina. This alone could add one per cent to the growth next year. Manufacturing has shown a marginal recovery during recent months but the overall growth is anaemic (2.6 per cent in 2015-'16).

Basic metals has grown at just one per cent primarily because exports are down by about 25 per cent owing to a slowdown in global demand. Food products and beverages showed negative growth of six per cent probably owing to lower consumption domestically. While consumption has shown an improvement, it hasn't been strong. It is likely to be strong post-monsoon.

On the export front, there are two issues: one is the overall slowdown in global markets and secondly, in many categories, India's competitiveness has been coming down, whether it is because of cost or capabilities. The first is not in our control but the government must engage with exporters to fix the second one and link any incentives to developing competitive advantages that go beyond price.

The banking sector is washed in red as a large number of NPAs keep getting written off every month (top four PSU banks have reported losses of Rs 19,100 crore in FY16 as against profits of Rs 9,000 crore in FY15). While credit growth had recovered during the second half of last year, it has slowed down again in the last two months.

In sum, it appears that while low crude prices have been good for the country, low global demand has hurt many industries. Poor monsoon during the last two years has also squeezed local consumption. However, except global demand, all other metrics are likely to show an uptick after the monsoon this year.

The overall employment situation is not great despite the economy growing at about seven to eight per cent. While it is likely to recover somewhat later this year and much more over the next two-and-a-half years, the recovery may be too late.

These unemployed who numbered around 85 million in 2011 could increase to more than 100 million or about ten per cent of the voters in 2019. Add immediate family members and these voters could have an impact on about 30 per cent of the overall voter base. Many of these voters could be angry and vote for Opposition parties instead of the BJP. In 2004, Atal Bihari Vajpayee lost the general elections because employment was a big issue.

A lesser known fact from the 2014 Lok Sabha elections is that the BJP government underperformed among younger voters (18-21 years) in many states. In Gujarat it polled 49 per cent of votes among the youth as against 59 per cent among the overall population; in Chhattisgarh the ratio was 40 per cent to 49 per cent. Further, the party significantly overperformed in states like Uttar Pradesh (51 per cent versus 43 per cent) and Madhya Pradesh (65 per cent versus 54 per cent). In all these states, the proportion of young voters is only likely to increase given the current population bulge.

India needs higher growth and more jobs. This, and not whether India becomes Congress mukt or not, will determine the fate of Modi in 2019. The priorities here are clearly defined.

#Two years of Modi, #BJP, #Narendra Modi, #Unemployment
The views and opinions expressed in this article are those of the authors and do not necessarily reflect the official policy or position of DailyO.in or the India Today Group. The writers are solely responsible for any claims arising out of the contents of this article.