A wave of happiness unfurled, marked by a thrilling cheer which ran through the offices of private companies where employees were watching the Budget speech of Piyush Goyal, when the Interim Finance Minister announced the revision of no-income tax limit from Rs 2.50 lakh to Rs five lakh.

The same sense of joy ran through small farmers in rural India as Panchayat chiefs in villages broke the news that those owning 2.5 hectares or less farming land in villages would get Rs 6,000 per year in three monthly installments, to enable them to meet their small and short-term finance needs, like paying loan installments or getting seed loans. Over 12 crore small farmers, largely distressed ones, would benefit from this measure.

The relief to the common people wanting to own a home was also very significant.

Ordinary people in the unorganised sector like plumbers, shoe-makers and carpenters, the same crowd which benefitted from Modi's Mudra loan scheme, will be the beneficiaries of this scheme. Their number stands around 42 crore in the country.

Finance Minister Piyush Goel said: "It's an all-encompassing budget aiming at all-round development in keeping with the PM's vision of 'Sab Ka Saath, Sab Ka Vikas'. It reflects his commitment to and concern for the poor and common people." 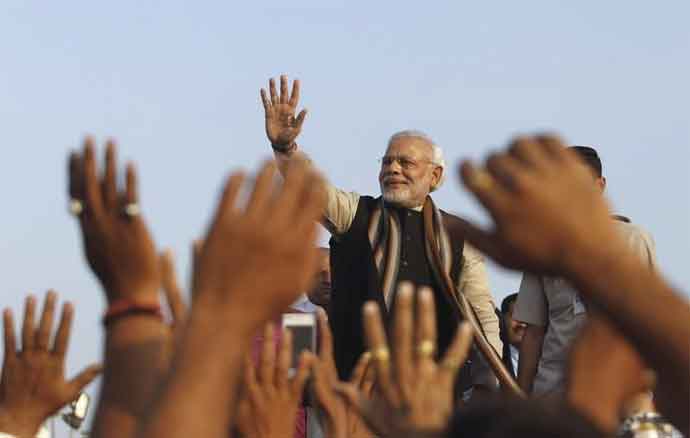 Modi has stuck to his own unique model which is based on an empowering and enabling vision, rather than a Congress-like dole-based program. (Photo: PTI)

But what was significant was the wave of jubilation the Budget sent through the party cadres as well as the leadership, reportedly shaken of late by the dark clouds of despair looming over the BJP's head in terms of the upcoming Lok Sabha polls.

Said a cheerful Ramesh Raghuvanshi, a BJP worker from Madhya Pradesh, "This budget has poured iron into our veins. We will now fight with full vigour."

Amit Malviya, the BJP IT cell's national coordinator and a former investment banker, who understands the economy, was equally jubilant, "Modiji has given precisely what the people as well as party men were expecting. It's a truly pleasing budget and has no tampering with financial discipline unlike the previous regime."

Malviya is not off the mark.

While some would see the relief to farmers as 'doles', Modi has stuck to his own unique model, which is based on an empowering and enabling vision rather than a dole-based model of the Congress period. Modi has not deviated from his basic principle that no society can progress on hand-outs alone. It needs more than that. (Photo: India Today)

In the pension scheme announced for the unorganised sector, he makes the applicant pay Rs 55 per month. This is like the Ujjwala Cooking Gas Kit Scheme wherein the beneficiaries have to pay Rs 1600 per kit while the remaining Rs 1600 comes as subsidy from the government to meet the cost of the kit, which is Rs 3,200.

In the recent Rajasthan, Madhya Pradesh and Chhattisgarh state assembly elections, in which the BJP lost the three states it was ruling, an incumbant Chief Minister of one of the three states had sought permission from Modi for announcing a blanket loan waiver for medium and small farmers on the eve of the elections. But the PM reportedly put his foot down.

Clearly, while giving some concessions, Modi has largely stuck to his old line of financial discipline and has not deviated from his basic principle that no society can progress on doles alone.

This is good for the nation.