When the PM with poetic flourish claims to be impatient for change, he is attempting to assuage the disillusioned voter who he has previously promised ‘achche din’.

One of the biggest mistakes political journalists make is to often assess election trends based on talking to politicians. When Narendra Modi was Gujarat chief minister, any reporter who spoke to Mr Modi’s fellow politicians (be they rivals or even from the BJP) was convinced he was losing. In 2012, one of them wagered a dinner bet with me that creeping anti-incumbency against sitting MLAs would spell doom for Mr Modi.

As it turned out, Mr Modi won a third successive election rather comfortably and I won my bet. The reason was simple: politicians disliked Mr Modi because he refused to share power with them but the voters seemed mesmerised by the Modi persona because he offered them hope and boundless positive energy as a potential change agent.

The Gujarat political model now seems to be playing out in Delhi too as Mr Modi seeks re-election in 2019. The Congress under Rahul Gandhi seems certain that a well-crafted opposition "maha-gatbandhan" in key states like Uttar Pradesh will mean the end of Modi Raj.

A Mayawati-Akhilesh alliance in particular is seen as the game-changer that could severely hit the BJP’s chances in the country’s most populous state where the BJP won as many as 73 of the 80 seats in 2019. Several BJP MPs will privately tell you that the government is in big trouble (what they won't tell you is that many of them may not even get tickets to contest this time). And yet, while local alliance arithmetic may work against the BJP, the chemistry of the prime minister is intact.

Mr Modi’s 2018 Independence Day speech was, in fact, a reaffirmation of his original success formula: after four years in power, the prime minister with his formidable communication skills is still projecting himself as an anti-establishment political revolutionary who is out to reform the system. This is the energetic Mr Fix-It who wants to be seen as a feel-good guru in contrast with his opponents who he has cleverly boxed in as carping critics oozing negativity. That is how he had built his equity in the 2014 elections lead up: the only difference is that then he was the challenger, now he is the incumbent.

So when Mr Modi with poetic flourish claims to be impatient for change, he is attempting to assuage the disillusioned voter who he has previously promised "achche din". When he contrasts himself as the "kaamdaar" (day-labourer) versus the "namdaar" (dynast), he is identifying himself once again as the meritorious "outsider" who is challenging the ancient regime based on elite privilege.

When he contrasts his government with the UPA of 2013, he is again seeking to position himself as a muscular, decisive leader, unlike his predecessor. When he lists out his government’s achievements and proposes a series of big bang schemes on a range of issues from healthcare to electrification, then he is again trying to ride a wave of optimism: this is the India Rising dream which is being sold by an artful political dream merchant.

In this sunny universe, there is no place for discussion over whether the targets have been met or not, or indeed, how the proposed budgetary allotments will suffice. The Modi discourse has no place for negativity and areas of darkness which is perhaps why there was no mention of lynchings and hate crimes in the speech. When Mr Modi claims to have rid the system of fixers and middlemen, he gets instant applause because he is seen to be striking at his own political class that is widely perceived to be thoroughly compromised and corrupted.

It is this skilfully cultivated image of the prime minister as the non-corrupt "karmayogi" "outsider" which the opposition, especially the Congress, has been desperately trying to dent over the last four years. In 2015, the expensive self-embossed suit at a summit meeting with US President Barack Obama gave Rahul Gandhi an opportunity to target Mr Modi as a "suit-boot kee sarkar".

The prime minister’s frequent foreign travels have been criticised too as evidence of Mr Modi’s fondness for VVIP luxury. In 2018, the Rafael aircraft controversy had led to charges of crony corruption and allegations of benefitting industrialist friends. The "Ambani-Adani" tag has been pinned on Mr Modi in the hope that this will convince the voter that the prime minister isn’t quite the humble "chaiwallah" he claims to be but is actually part of the power elite: the opposition hopes that the strategy will strip the "outsider" halo that remains Mr Modi’s USP. 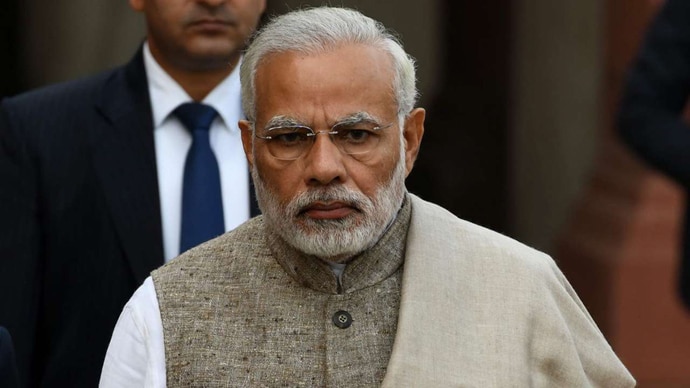 When Narendra Modi contrasts his government with the UPA of 2013, he is again seeking to position himself as a muscular, decisive leader, unlike his predecessor. (Photo: PTI)

And yet, as almost every opinion poll has shown, the prime minister’s popular appeal is way above anyone else. This maybe partly because of his sharp political antennae that alert him to potential danger: notice how many times he referred to "kisan" and "gareeb" in his Independence Day speech in a clear attempt to offset any anger caused by agrarian distress.

It may also be because the media, especially television, has provided him such a soft landing that there has been virtually no serious attempt made to question Mr Modi’s myth-making machine. It may also be a reflection of the state of the opposition: many of them have far too many skeletons in their cupboard to offer a credible ethical challenge to the moral failings of the Modi regime.

For example, can a party like the Congress really question the Modi government on its links with big business without exposing itself to similar charges of having once provided windfall profits to the very forces who the prime minister is now accused of being chummy with?

Which is why if the 2019 contest is pitched as Modi versus Rahul as the BJP’s campaign managers are attempting, then the prime minister remains in pole position to emerge victorious unless the Opposition is able to find a narrative that goes beyond just anti-Modiism or a much-hyped hug and a wink. What that narrative is remains unclear but when any criticism of the Modi cult is deemed "anti-national", then it isn’t going to be easy for a disjointed opposition to mount a sustained challenge.

Post-script: Just ahead of the 2004 general elections, Atal Bihari Vajpayee, much like Mr Modi today, appeared unassailable. And yet, a couple of alliances went awry and allowed the Congress-led opposition to sneak in. “We took our victory for granted,” Mr Vajpayee’s key points-person Pramod Mahajan ruefully admitted later. It is unlikely that Mr Modi and his Man Friday Amit Shah will be as complacent.

Viewers can watch results of India Today's Mood of the Nation Poll at 7 pm tonight on India Today TV.

(Rajdeep Sardesai is consulting editor TV Today and his latest book, Newsman: Tracking India in the Modi Era, is now in stores and online)

#Lok Sabha polls 2019, #Atal Bihari Vajpayee, #Congress, #BJP
The views and opinions expressed in this article are those of the authors and do not necessarily reflect the official policy or position of DailyO.in or the India Today Group. The writers are solely responsible for any claims arising out of the contents of this article.