When Modi meets Trump - things will be a lot different

This will be PM's fifth and shortest bilateral visit to the US since he took office.

Next week, Prime Minister Narendra Modi will be in the US for his long anticipated meeting with President Donald Trump. Given the circumstances, expectations are low, but the visit will be important in defining Indo-US engagement in the Trump era.

Officials are saying this is a “get to know you” kind of visit minus the hoopla that surrounded Modi’s first visit to the US as PM in 2014. This will be Modi’s fifth and shortest bilateral visit to the US since he took office, he made another visit to attend the multilateral Nuclear Security Summit in March 2016.

Unlike China or Mexico, India was not in Trump’s cross-hairs prior to becoming President. In his campaign speeches, he did lump India, along with China, Japan, Mexico and others for “ripping off” the US and taking away American jobs. But later in October, a month before the election, he participated in a fund raiser organised by the Republican Hindu Coalition (RHC) funded by Shalabh Kumar, and in his keynote address he said, “India and Hindu community will have a true friend in the White House.”

During the current visit, Modi will avoid the kind of diaspora event he staged at New York’s Madison Garden. Given Trump’s allergy to immigration and immigrants, this could possibly provoke a negative reaction. The Modi team is well aware there are limits to using the diaspora to push Indian policy. 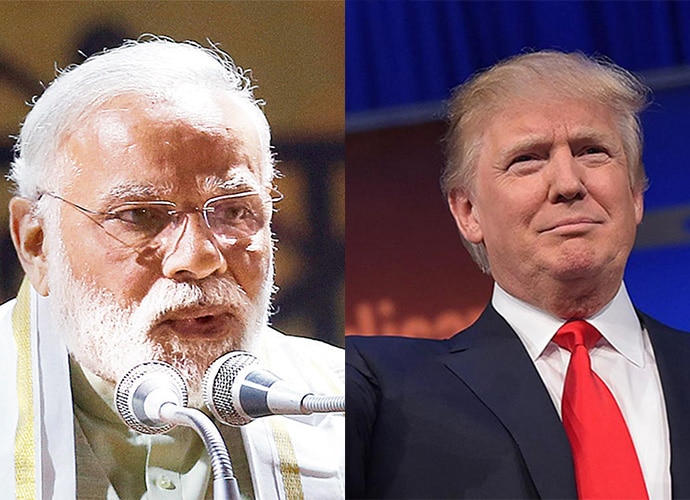 The first issue that Modi will seek to deal with is that of H1B visas. The US allocates 65,000 of these visas to allow US companies to bring highly specialised foreign workers and in 2016 more than two lakh Indians had applied. Related to this is the anti-out sourcing stand of the Trump Administration which could impact on the $150 billion per annum IT industry in India.

There is a fundamental clash of interests between a Trump programme of America First and Modi’s Make in India idea. The challenge is to find the middle ground and see whether the two sides can cut a deal towards mutual gain.

The second issue is that of China. Since he became President, Trump has bewildered the world with his shifting stances. Perhaps the most dramatic has been the shift on China where through the campaign he attacked China, promising to get tough on it on a range of areas from trade to the South China Sea.

But as President he has shifted track. Concern over America’s China policy is important for India which has reached out to the US and even made significant commitments such as committing itself to a mutual basing agreement and signing up on a Joint Strategic Vision for the Asia Pacific and the Indian Ocean with a view of balancing China’s rising power.

Third, India would like to fit its Pakistan concerns relating to Pakistan within President Trump’s hardline views on Islamic radicalism. But the US attitude towards Islamic radicalism seems confined to the Arab world and the Sunni/Shia interface. This is related to India’s hope of closer cooperation with the US whose position on Afghanistan is still evolving.

India is waiting for a broader long term US strategy for stabilising Afghanistan. However, it is clear from the limited increase in trainers and advisers being undertaken by the Pentagon that the US will pursue some form of “reconciliation” which could involve negotiations with the Taliban and the good offices of Pakistan. This would not fit into the Indian calculus, and it remains to be seen whether New Delhi is willing to adjust its position to meet American goals.

Fourth, there is the issue of the Middle East, the one area where US and Indian interests have never quite been aligned and where the Trump disruption is at work. From the point of view of interests, this is arguably the most important external region for India.

Here, the US hardline on Iran threatens to throw a spanner in the works of our policy which seeks to carefully balance ties between the Saudi Arabia, GCC, Iran and Israel. The experience so far is that in dealing with the Trump Administration, it is the President himself who matters. He does not hesitate to upend policies recommended by his Cabinet colleagues or go back on his own views.

For this reason, the key outcome will be in the chemistry that develops through the Modi-Trump dinner meeting. There is nothing to suggest that this could go awry, but then, with Trump, you never know.

Also read: What climate negotiators in Paris forgot - 10 reasons why Trump is an extreme event

#Islam, #Racism, #USA, #Donald Trump
The views and opinions expressed in this article are those of the authors and do not necessarily reflect the official policy or position of DailyO.in or the India Today Group. The writers are solely responsible for any claims arising out of the contents of this article.