Narendra Modi in Benaras: Why it is likely that for a change, the Prime Minister will include and name his regional allies in his Varanasi show

The BJP will need to overcome the sheer arithmetical superiority of the grand alliance in more seats in Uttar Pradesh. And it will have to assuage allies who feel the party is a one-man show.

In the first two rounds of voting for the BJP in Uttar Pradesh, the battle went down to the wire — and one can say it was an equal contest with the gathbandhan or grand alliance.

The third round, however, on April 23 when 10 seats voted, was terrible for the Modi-led BJP — only two seats seem safe for the ruling party in Delhi and Lucknow. Voices on the ground suggest that the remainder eight have gone to the SP-BSP formation, with SP the big brother, due to the social composition in these parts of the state.

Therefore, on April 26, when Narendra Modi heads to Varanasi to file his nomination, some simple rebooting of the image will be done.

The One Man show so far will be visually rejigged and the man will showcase himself with a few extras in the frame — the allies of the NDA. That the PM feels the need to show that he is not always a solo show is in itself a response to the discouraging news from Uttar Pradesh.

Built into the imaging of carrying JD(U)’s Nitish Kumar and Shiv Sena’s Uddhav Thackeray to Varanasi is the message that the BJP has stitched up pre-poll alliances and been generous with both these allies. The BJP would not be wrong in doing so. Towards the end of this government’s term, in a 'better late than never' moment, it recognised the need to be generous with small players of the NDA. It knows that a coalition is the most possible outcome. 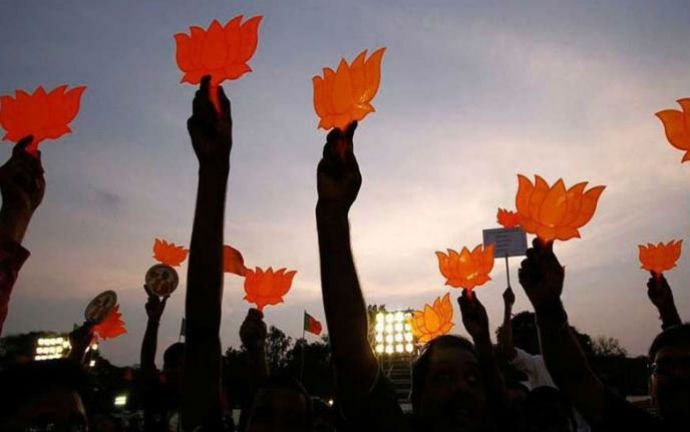 For a thousand lotuses to bloom — BJP seems to have now recognised the need to be generous with NDA's smaller players. (Photo: Reuters)

But here is where it would be confronted with the challenge of making up the shortfall in numbers that range, according to various estimates, from 90 to 40 seats.

Meanwhile, what can the BJP do to overcome the arithmetical superiority of the grand alliance in more seats in Uttar Pradesh? All that the BJP has actually done so far in this election is to talk of Balakot and the Indian Army and resorted to a predictable mining of such issues. The imagination has also not moved beyond the Muslim=Pakistani=Kashmiri=Bangladeshi=anti-national tableaux.

It works up to a point — and certainly, there is always a low-key Hindu Muslim sentiment on the ground in many parts of Uttar Pradesh. But when it does not seem enough to challenge an arithmetical proposition, it falls a bit flat.

That’s happening now in the state where the Ram mandir had already become a big bore and the othering of Muslims has already gone to a pitch.

What next to take it higher?

The BJP’s own cadre is a bit demotivated for several interesting reasons. First, parties such as the SP and BSP are more adept at rewarding their workers. Beyond feeling empowered to run cow protection rackets and shout slogans, actually the Yogi Adityanath regime has not been able to satisfy the demands/expectation/desires of cadres and workers who found themselves in power in the state in 2017 after a long dry spell. Stuck on the same planks — The BJP's poll narrative so far has been limited to Balakot and the Indian Army. (Representational image: Reuters)

Touring the seats in the third and second phase, I would hear from party state leaders and workers how the demand to organise rallies for president Amit Shah has become a problem.

Here are the details of a programme planned in Amroha last month for booth-level workers of the BJP/RSS attended by Shah and CM Yogi Adityanath.

The workers sat through the Yogi speech who is never boring (although very controversial). But the minute the national president of the BJP began to speak, half the audience headed for the doors with the organisers running behind them to stop!

The national BJP has a budget reportedly upwards of Rs 1 crore for each Modi rally — in 2019, workers have to be apparently mobilised in villages and carted there in buses and paid their fees. In 2014, they came out of enthusiasm; now, they want to come and vote Modi, but also demand remuneration for the effort.

Essentially, Modi’s events are designed for TV coverage — but they have to look real and authentic on the ground. What is fascinating is the complaint of the stress and extra labour involved in organising all this by the local units. An MLA elaborates that in many cases, the PM came and essentially said 'vote for Modi' — he did not even name the candidates from the three or four constituencies around the venue who came.

Now, it’s over to Varanasi where the PM will undoubtedly name his regional allies.