By raising Balochistan issue, Modi may have walked into a trap

Few people expected that the Narendra Modi government would begin to implode less than halfway through its five-year term. The denouement came on Independence Day when the prime minister in a throwaway comment at the end of his stultifying 90-minute speech, said, "I am grateful to the people of Balochistan, Gilgit and PoK who have thanked me in the past few days. If people of Balochistan thank me, they are thanking the 125 crore Indians."

The remark provoked an outcry among the community of foreign policy experts, Modi was accused of reversing an age-old Indian position: do not meddle in the internal affairs of Pakistan.

Delhi’s line has been to brand their involvement in Kashmir as interference that is illegal and disruptive of regional peace. The Independence Day speech was labelled a shocking demonstration of foreign policy heresy, especially when you consider the nuclear threat.

First off the block in response was Salman Khurshid, former external affairs minister: "Is Balochistan a part of India? Doesn’t India believe in Panchsheel? Is it not a departure from that?" By raising Balochistan, Khurshid said, the government is "ruining our case on Pakistan-occupied Kashmir."

Warming to the theme, Congress issued an official statement to stress that the UPA had raised the issue of human rights violations in Balochistan as far back as 2005, 2006 and had brought it up directly with Pakistan at the 2009 Non-Aligned Summit in Sharm el-Sheikh, Egypt.

The Congress statement asked: "How does Prime Minister Modi propose to take the issue of human rights violations in PoK and Balochistan further? What is his government policy as also 'way forward' on the issue? Has Mr Modi raised the issue of these human rights violations even once in bilateral talks with Pakistan over last 24 months? Will his government take it up now: either in bilateral dialogue or at another international forum?" 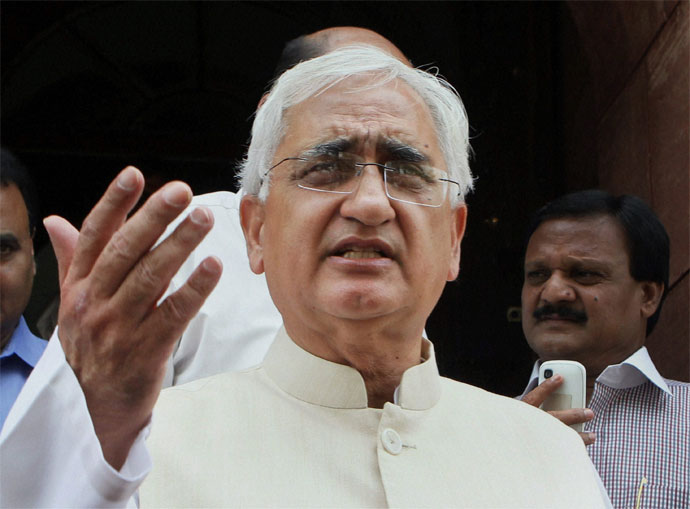 By raising Balochistan, Salman Khurshid said, the government is "ruining our case on Pakistan-occupied Kashmir."

Amazingly, the media interpreted it as "support" for Modi. Someone has sprinkled Modi stardust in journalists' eyes. To them, he can do no wrong even when he has consistently tripped on major policy issues, foreign and domestic. In this case, the media went a mischievous step further and tried to suggest a hiatus between the official statement of the Congress and what Khurshid said.

The Congress reaction was actually an endorsement of Khurshid’s comment and was aimed at showing up the confusion in the government’s blow-hot, blow-cold Pakistan policy and pointing out yet another reversal in the BJP’s approach.

Just to recap: The India-Pakistan joint statement at Sharm el-Sheikh included a mention of human rights violations in Balochistan. Sensing an opportunity to continue its campaign of heaping abuse on prime minister Manmohan Singh, the BJP went to town, without the slightest understanding of the great game, the strategic and tactical approaches of the great powers in the region.

During a July 2009 debate in Parliament, a major daily wrote, "The BJP launched a frontal assault on the government for compromising India's stated position on Pakistan in the Sharm-el-Sheikh joint statement and said the 'waters of the seven seas will not be able to wash the shame' brought on the country through this flawed initiative."

After that melodramatic flourish seven years ago, the BJP sat silent this August 15 as Modi appropriated yet another policy initiative of the previous government. Without the slightest embarrassment, the NDA government has adopted UPA policies they maligned in the past and tried to pass off as their own. This time, however, they may have walked into a trap.

Insiders say the most recent Congress statement had the Rahul Gandhi imprimatur. For all the abuse he has endured from the BJP and its army of internet trolls, Gandhi has managed with great aplomb to get under Modi’s skin. His "suit-boot sarkar" tag has stuck to the government, forcing it to make major U-turns on key issues.

For example, about the Mahatma Gandhi National Rural Employment Guarantee Scheme, Mr Modi said in Parliament, "I will ensure MNREGA is never discontinued. It is proof of your failings. After so many years of being in power, all you were able to deliver is for a poor man to dig ditches a few days a month." This was in February 2015 when he was riding high on his 2014 election victory.

His remarks came in for scathing criticism from across the political spectrum. A few days later, in his Budget speech, finance minister Arun Jaitley said exactly the opposite. Calling the scheme a "national priority", he said: "Our government is committed to supporting employment through MNREGA. We will ensure that no one who is poor is left without employment."

Rahul Gandhi’s interventions have served to unnerve the government. It is now widely acknowledged that Modi has nothing original to offer. His reference to Balochistan in his August 15 speech was consistent with this trend.

It was the same in Kashmir that his government’s bungling has brought to the brink; unable to formulate a cogent response to the fire in the Valley, Modi sent his home minister scurrying to Sonia Gandhi and some other opposition leaders for help.

Policy bankruptcy has become the hallmark of Modi’s "maximum governance".

Great at posturing but innocent of substance, Modi will find that he is now in a pickle. It’s almost as though the Congress is using him to expose his own duplicity.

Given his penchant for managing headlines and the unprecedented servility of mainstream media, especially television news, Modi and his acolytes will try to shrug off their terminal lack of governance.

The first electoral debacle was Delhi, next was Bihar, they held out in Assam but then fell apart in Uttarakhand and Arunachal.

Now they have fires to fight in Kashmir and Gujarat. The sheen has certainly worn off; now the credibility is eroding.

#Foreign policy, #Narendra Modi, #Balochistan
The views and opinions expressed in this article are those of the authors and do not necessarily reflect the official policy or position of DailyO.in or the India Today Group. The writers are solely responsible for any claims arising out of the contents of this article.